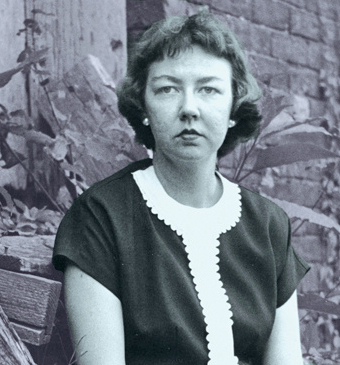 Here, Flannery O’ Connor writes to Betty Hester, a fan who became O’Connor’s correspondent after writing her a personal letter. Hester, an unpublished writer, proved a confidant for O’Connor’s private life and a helpful reader for her work. In this letter, the two talk about Protestant writers and Catholic rites. The Oversoul cited in Hawthorne’s snide remark could be a reference to Emerson’s essay The Over-Soul, a work about the human soul and ego, thought to be influenced by eastern religious philosophy.

Well I am overawed to have The Bridge—but this is no library book. Does that mean I can keep it so long as I please and if inspired by the Holy Ghost write in the margins? You couldn’t have had a chance to look at it yourself as it appears to be formidable. I am plagued by my ignorance of the Old Testament and this is going to throw light on some more dark places. I am more than obliged to you—for many things…

That they harbor an ex-dancer among the Sisters at the cancer home is just another indication of the Grace that must move through that place. I have more admiration for them than any other order I know. You know it was founded by Hawthorne’s daughter? My evil imagination tells me that this was God’s way of rewarding Hawthorne for hating the Transcendentalists. One of my Nashville friends was telling me that Hawthorne couldn’t stand Emerson or any of that crowd. When one of them came in the front door, Hawthorne went out the back. He met one of them one morning and snarled, “Good Morning Mr. G., how is your Oversoul this morning?”

The lady that novenas don’t send sounds very pleasant. Having grown up with them, I think of novenas the same way I think of the hideous Catholic churches you all too frequently find yourself in, that is, after a time I cease to see them even though I’m in them. The virtue of novenas is that they keep you at it for nine consecutive days and the human attention being what it is, this is a long time. I hate to say most of these prayers written by saints-in-an-emotional-state. You feel you are wearing somebody else’s finery and I can never describe my heart as “burning” to the Lord (who knows better) without snickering.

I have just been disgusted to read the review of Caroline Gordon’s book in Time. They could not be expected to like such a book but what seems particularly low in the review is that it implies there is not even any honesty of intention in the writing. I read the book in page proofs. I don’t think it is entirely successful as she is trying to do something impossible, but I think it is a good deal better than most of what they will recommend during the year. I am a Time subscriber but I think it is a stupid magazine…This is the lady who has taught me so much about writing…

It is hard to make your adversaries real people unless you recognize yourself in them—in which case, if you don’t watch out, they cease to be adversaries. I don’t know if that was Dostoevsky’s trouble or not. As for me you are mighty right I could do with some learning about souls not my own—only I wouldn’t be knowing where I’m to get that from.

This pride in the tin leg comes from an old scar. I was, in my early days, forced to take dancing to throw me into the company of other children and to make me graceful. Nothing I hated worse than the company of other children and I vowed I’d see them all in hell before I would make the first graceful move. The lessons went on for a number of years but I won. In a certain sense.

The enclosed is for you. I sent it to Mr. Ransom last week and got word today that they will use it probably in the summer issue. If you don’t like it, don’t fail to say so. I have a heart of pure steel.

From The Habit of Being. O’Connor, Flannery, and Sally Fitzgerald. New York: Farrar, Straus, and Giroux, 1978.