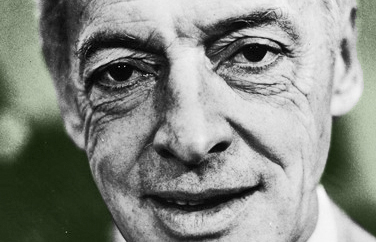 Saul Bellow usually wrote with tone of unabashed, even pretentious, authority in his letters. But while addressing Owen Barfield, as in the note below, his tone is deferential. At the beginning of their friendship Bellow believed himself to be the disciple of a true spiritual mentor. At Barfield’s suggestion, Bellow invested himself in an intense study of anthroposophy, the philosophy founded by German thinker Rudolph Steiner which blended the mystical with the empirical in the attempt to understand the nature of consciousness.

With my “meaning to write” I am like a drunkard who says he will reform: going on the wagon, as drinkers here say, and the wagon is very different from the winged chariot. Your letter moved me by its warmth, kindness and candor. I have too much respect for what you have done, have made of yourself, to answer lightly and easily. Four or five years of reading Steiner have altered me considerably. Some kind of metamorphosis is going on, I think, and I am at a loss for words when I sit down to write to you. You will think it absurd that I should make a judge of you. It is absurd, and you must find it disagreeable as well, but the position carries no duties, you owe me nothing. I see you—it came through in your letter—as a man who has learned what to do with the consciousness-soul, has managed to regenerate severed connections and found passages that lead from thought to feeling. I won’t embarrass you by going on about this; you may think it bad form. I’ve observed in your books how you shun all such claims yourself, and that just as the Meggid calls himself the least of Michael’s servants you prefer to diminish yourself. The best of us have been destroyed in the wars of this century. Among the survivors there’s only the likes of ourselves to go on with. “I am myself indifferent honest, but…” Yes, it is like that. I am even more “indifferent honest,” myself, so it amused me to be described as a tank surrounded by pea-shooters.

I wanted to see you in Michigan, but it was impossible to go just then. I wouldn’t have had much time with you in any case. I have to satisfy myself by re-reading your books. I don’t think I shall be coming to England very soon. In Edinburgh two years ago an Anthroposophical lady, admonishing me, said, “Mr. Barfield will have to take you in hand in Kamaloca.” But perhaps I will have made some progress by that time and you won’t have to be so quite severe with me.

Note: Meggid is the name of the other worldly being who converses with Burgeon, the main character of Barfield’s Unancestral Voice. The “Meggid,”  much like Socrates’ daemon, speaks words of wisdom to man, part of the divine logos which, on occasion, lends itself to the human ear.

“Kamaloca” is defined as the plane between the material and spiritual realms, a point of semi-enlightened consciousness in the theosophical tradition.

An interview in which Bellow discusses his own inner voice.

J.M. Coetzee’s review of Bellow’s collected novels at the NYRB.

Further analysis of Bellow’s metaphysics at The New Statesman.