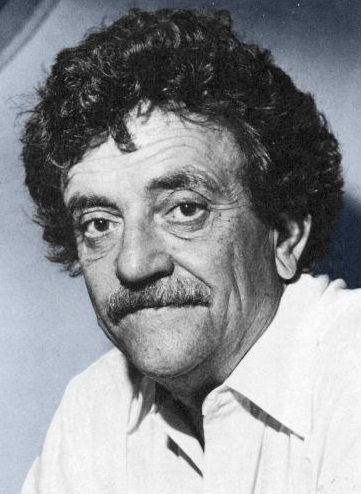 Kurt Vonnegut and critic Robert Scholes first met in the mid-60s at the School of Letters at the University of Iowa, where Scholes was on faculty. In Scholes’ book The Fabulators, which also analyzed the work of John Barth and Iris Murdoch, Scholes would become the first established critic to praise Vonnegut’s work. Below, Vonnegut responds to the book, playfully feigning injured pride that Scholes ranked Barth’s work over Vonnegut’s own.

I am groping now for the world that means a person who has traveled widely and speaks several languages. I think the word I want is cunnilinguist. How does it feel to be the one?

I assume you guys are home and cataloguing the lantern slides. Your perfectly neat book about me and the others arrived yesterday. If you hadn’t supplied an index which pinpointed every mention of me, I wouldn’t have been able to put it down until I’d read it all. I’m a little burned up that Barth won, but tomorrow is another day. My first book was more promising than his first book, which is something a careful critic wouldn’t forget.

Seriously I have read the whole book, and you’ve amused me, and you’ve taught me many things that are comforting or stimulating, or which can be turned into money in the bank. You write handsomely. At several points you wrote so well that I was moved to protest: Let’s leave the writing to the writers, Scholes. If you don’t know how a critic is supposed to write, I commend your attention The Tragic Vision.

Where you really get racking along like a happy Dixieland band is on page 97. You had to call it a pretty feeble fable, I suppose, but I give you my word of honor that it’s totally marvelous. It’s even true. You may or may not have noticed that I said some unkind things about academic critics in the Times Book Review a few weeks ago. It wasn’t an attack. It was kind of a kidding thing. But I didn’t mean you and I didn’t mean David. What you guys write is too open and amiable to be academic criticism. It’s just writing. There’s a difference, believe me.

Some real dumb bastard could read you guys and understand a good deal of it and be glad.

All goes well here. One of my sons is going to be a Unitarian minister. I’m pleased. What does that indicate—that that should please me? I haven’t been to Dresden yet—mainly because the writing has been going fairly well and I hate to interrupt it. Jane and I will get our passports renewed today, and then maybe we’ll hop over real quick.

Love to the little women, and cheers.

Read John Barth’s examination of the fear and freedom of the “already said.”