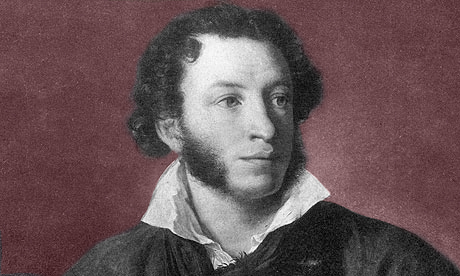 Natalia, a celebrated beauty and a favorite of the Tsar, was at a rented summer estate when she received this letter; Pushkin remained in Moscow to begin The Contemporary, a quarterly journal just founded with the Tsar’s permission. Pushkin’s playful tone belies the tension between him and his wife, a tension made worse by their financial troubles. A year and a half later, Natalia’s relationship with French expatriate D’Anthès prompted the duel that killed her husband.

What’s this, little wife? You began so well, and have ended so badly. Not a line from you. You haven’t had the baby already, have you? To day is Grishka’s birthday. Many happy returns of the day to him and to you. I shall drink to his health. He doesn’t have a new little brother or sister, does he? Wait until I arrive. And I’m already preparing to come to you. I’ve been in the Archives, and I shall be compelled to burrow into them for some six months. What’ll happen to you then? I’ll bring you with me, if you like. My life in Moscow is staid and respectable. I stay at home—I see only the male sex. I don’t go walking, I don’t cut capers—and I’m getting fat. A few days ago [A. D.] Chertkov invited me for dinner. I arrived there—and his wife had a miscarriage. This didn’t prevent us from dining very boringly and very badly. I am playing the coquette with Moscow literature as well as I know how. But the Observers hold me in no high esteem. Nobody except Nashchokin loves me. But tintere is my rival with him, and I’m being sacrificed to it. When I listen to the small talk of the local men of letters, I am astonished at how decent they can be in print and how stupid in conversation. Confess: Is that the way it is with me? Truly, I’m afraid it is. Baratynsky, however, is very pleasant. But somehow we’re cold towards each other. I’m pressing Bryullov to come to Petersburg—but he’s ill and is having a fit of the spleen. Here they want a bust of me to be sculptured. But I don’t want it. Then my Negro ugliness would be committed to immortality in all its dead immobility; I tell them that I have a beauty at home, whom we’ll sculpture some time. I have seen Khomyakov’s betrothed. I couldn’t get a good look at her in the twilight. As the late Gnedich used to say, she is pas un bel femme, but une jolie figurlette. Good-bye for a minute. Two buffoons are coming to see me. One is a major and a mystic; the other is a drunkard and a poet. I am leaving you for them.

I had difficulty getting rid of the buffoons—including Norov. Everybody is inviting me to dinner, but I am refusing everybody I’m beginning to think about departing. You are probably already in your suburban swamp. Just how are my children and my books? Just how was the moving of the former and the hauling of the later? And however did you manage to get your belly hauled? I bless you, my angel. God be with you and the children. Stay well, all of you. I greet your equestriennes. I kiss Katerina Ivanovna’s [Zagryazhskaya] little hands. Farewell.

I have received an extremely sweet letter from you—I haven’t the time to answer it. I thank you and kiss you, my angel.