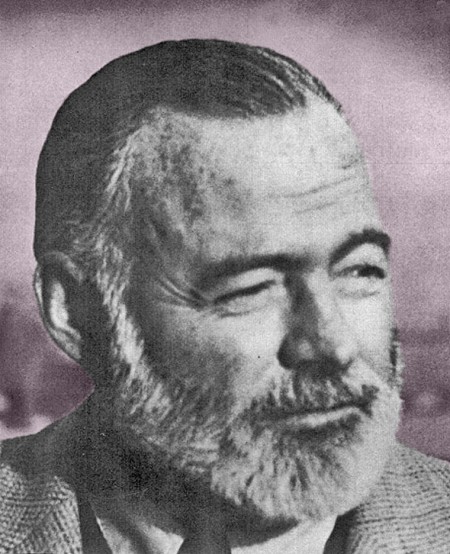 Below, Ernest Hemingway discusses recent work and shares news about his son, whom life partners Gertrude Stein and Alice B. Toklas called Goddy. Stein was Goddy’s godmother. Stein and Hemingway had always been committed pen pals, and the two assisted each other pursue artistic careers in France when Stein was living on the Left Bank. While there, she invited a number of artists and writers into her home, Hemingway among them. He would go on to chronicle his time at her home in A Moveable Feast.

I wrote you to the house a few days ago. You’ve probably gotten it by now. It is quiet today. The Sawmill isn’t running on account of Assumption.

The able bodied directors of the transatlantic meet today to elect Krebs President. He is going to be president and pay all the Bills. He has breakfast every morning at Ford’s and things are going smoothly. I am so glad it is going on being published with a minimum of worry now because it was too awfully bad to think of busting off publishing the long book regularly.

Your letter was fine. Goddy is well and has an upper tooth through and I think another one coming beside it. He is as hard spiritually as a chunk of carborundum and enjoys himself without anything outside having any effect or appeal. He is going to be a hard one and the sooner he gets shoved off into the world the more chance the world will have. My best hopes for his future are that he will not kill his parents some time because he needs 50 cents.

McAlmon has gone to England to live among his parents in law. I understand he is teaching Bryher to drink. That ain’t in the greek tradition is it?

I have had a good cousin here that would like to have shown off to you.

Bill Bird sent you one of his wine books. Did you get it? It is selling very fast

I have finished two long short stories, one of them not much good, and the other very good and finished the long one I worked on before I went to Spain where I’m trying to do the country like Cezanne and having a hell of a time and sometimes getting it a little bit. It is about 100 pages long and nothing happens and the country is swell, I made it all up, so I see it all and part of it comes out the way it ought to, it is swell about the fish, but isn’t writing a hard job though? It used to be easy before I met you. I certainly was bad, Gosh, I’m awfully bad now but it’s a different kind of bad.

Doumergue, you know, is an aficionado—and they are trying to put through corridas for Paris—It will be an awful time to get it by but there is an Empressa that is backed from the Elysee and they are going to try and stage one the first Sunday in Sept. with Old Gaston himself in the Presidential Palco. Belmonte, Sanchez Mejias, and Chicuelo with Miura Bulls. What a pipe dream I dont really think they will be able to get corridas by here. They’ve talked about it so often before but now they’ve got a man in the Elysee that’s often been in those Course Libre at Nimes! Did you hear about the ten gold spoons missing at the Elysee, value, 8,500 francs, after the reception to the American Ad. Men! Its true. I saw the bulletin. The Rotarians would have cleaned them out.

Don’t stay away too long.