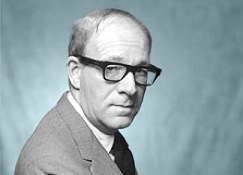 Howard Moss responds to Elizabeth Bishop, whose poetry he championed as the New Yorker poetry editor, with news and thanks for her comments on a book of his own. His letter, full of self-deprecating humor, shows the friendship between the two poets as well as their business relationship.

I did get your fine letter, and it meant a great deal to me, as you know, that you liked some of the poems. My not answering is due only to my long-ingrained and deep sloth, and also my habit of writing letters in my head while I lie on my couch, smoking. Once the daydream has ended, the letter is a good as dispatched. Freud has some noble things to say on this matter.

The reviews have been favorable, generally, but stupid. It is unbelievable what people say about poetry—there must be a stable of morons somewhere kept exclusively for this purpose. When I find it, my home-made demolition bomb will do its usual efficient work.

I leave Monday for a month’s vacation—beach, beach, beach—and am, at the moment, semi-hysterical. I’m only going to Long Island but any trip, and even the idea of travel, throws me for a loop. (Or is it loup?) I’ve always admired your ability—John Brinnin’s, too—to take planes, ships, and water taxis to remote stations. If I go away for a week-end I have to spend the whole week getting ready, and then, shaking with compulsion and fear, I stand on railway platforms—usually the LIRR—anticipating my doom. It has something to do with a lack of love in childhood, and is, I’m afraid, persistent. Not being sure of the nest I’m in, I hesistate to get in another. Bird psychology 1.

News is dim. Everyone’s away or going: Mary Lou to Folly Cove, John to Europe, Pearl to Folly Cove, etc. I’ve seen Lloyd [Frankenburg] and Loren [MacIver] around at parties, but haven’t much of an idea of what they’re up to. I offered Loren a sum of money to paint me a picture worth that much, but I think she found the whole idea depressing, if not pretentious. I would love to own both Paris and Venice, but can’t compete with museums. Eudora was in town on her way to Cambridge where she’s supposed to lecture to teachers about teaching writing. She told me her first lecture, which I thought was sort of hilarious, since the secret gist of it is simply: why don’t they just write? camouflaged under things like genre, scene, place, etc. The point peeps out everywhere. I suggested speed as a possible subject. I love writers who write things about speed—in the novel, poem, etc. The snail of effort is the title of my handbook on writing.

I’m sorry this letter is so fuzzy but I can’t get over the idea that I allowed myself to go somewhere again. I invented a psychiatric nurse called Miss Cook who takes me everywhere and believes that brandy is an antibiotic. Also a thing called Instant Leech—just add hot blood and serve.

When will you ever come back? I would love to see you again and hate to think that I might have to travel to Brazil to do it. Please do come back for awhile, a long shopping tour or something, the way you did last time. And where is A Cold Spring? Since I know North and South almost by heart by now, I should think, out of consideration for a fan, you’d let them bring it out. And did I tell you how much liked THE SCREAM [“In the Village”]? I hope you’ll do a whole book of Novia Scotia pieces. Do drop me a line when you can; so far everything has arrived, so the Brazilian mail may not be as far gone as you thought. Though as corrupt, I hope.

Please give my best to Lota.

An article about Howard Moss and Elizabeth Bishop, dealing with what may have been Moss’ controversial edit to one of Bishop’s poems, appears here.

Find one of the generally “favorable…but stupid” reviews of The Toy Fair, the book of Moss’ poems published in 1954, here.