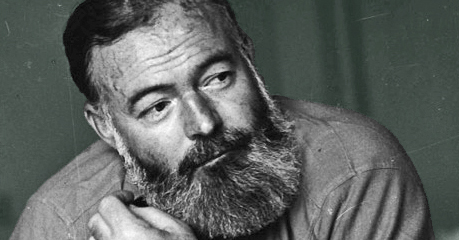 In the spring of 1958, The Paris Review ran an interview with Hemingway in which he discussed writing and regaled George Plimpton with stories of the Paris expat scene of the 1920’s. Hemingway’s longtime friend and poet, Archibald Macleish was upset by the interview; not only was Macleish apparently misquoted in the piece, but he was conspicuously absent from Hemingway’s reminiscences (they had traveled all over Europe together in the 1920’s). Here, Hemingway writes to account for the omissions.

Note: Hemingway had a reputation as a wretched stenographer—it is something he almost prided himself on. His errors have been preserved in the text below.

I was awfully glad to get your letter out here but sorry there was something loused up in the [Paris Review] interview. All I could do was try to answer the questions as they were put. Am sure you told it straight and that they got it wrong. Everybody gets everything wrong.

About knowing writers it was older writers they meant and I never thought of you as an older writer. Also think they were asking about when we first hit Paris in the old Rue de Cardinal Lemoine-Place Contrescarpe days. Maybe I knew you then but I dont think it was until we had gone back to Canada and then come back to live at 113 rue Notre Dame des Champs. I remember very clearly comeing to the Rue du Bac the first time and stealing a cork screw which I remember returning. Anyway George [Plimpton] was asking about the first days in Paris and that was what I was talking about and writing about at the time. When we used to go around together was afterwards when I not see very much of G. Stein any more and Ezra went to Rapallo and Joyce had finished Ulysses and the fun time between that and going to work on the blind stuff. You correct me if I am wrong because I can remember most things word for word that were important but other times I would forget automatically.

You dope. Did you think I had forgotten Rue de Bac, juan les Pins, Zaragoza, Chartres, that place of Peter Hamiltons you lived, our bicycles, Ada and the Six Jours [bike races], rue Froidevaux, and a million things Gstaad,—don’t ask me to name them all, Bassano and A Pursuit Race. How many better stories has she published than that turn down—they all write about those people and about the junk show.

But Archie I am a slow writer about the past and I cant put you in before I knew you but I was very fond of you and am and I loved Ada and I do.

Poor Sara and Gerald—let’s not write about it. I loved Sara and I never could stand Gerald but I did…

Read the full interview here in the Paris Review.

For a condensed biography of Archibald MacLeish (and a few neat excerpts from his canon), see his page on Poetry Foundation.