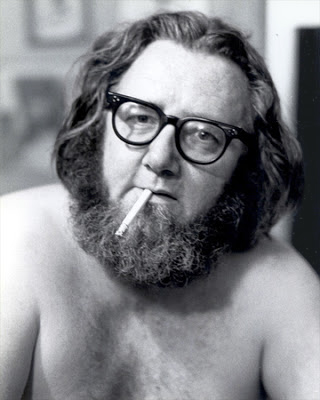 Here, Ted Berrigan writes to Sandy Berrigan (née Alper), a nineteen-year-old woman whom Ted (twenty-seven at the time) married only six days after meeting her while visiting a friend at Tulane. At the time the letter was written, Sandy was in the mental ward of a Florida hospital, at the insistence of her parents, who were intent on separating the two. Ted would later be chased out of Florida by the Sheriff’s office, although he and Sandy would go on to have two children, before ultimately divorcing in 1969.

It’s almost midnight Sunday night, more than twenty-four hours since we talked, and the first time I’ve had to myself since then. I had to finish writing a paper on anthropology in return for the money I’ve sent, which took all night, and then, since I hadn’t slept in forty hours, I fell into a coma and slept ten hours. And here I am.

My lovely beautiful Sandy, hearing your voice was so unbelievably wonderful, so thrilling, I can hardly remember what we said, but I remember every inflection in your voice, and every image of you that came to me as I heard you laughing and crying and talking. Hearing you was better than all these letters, all the words in the world.

I love you so much. We will be together again, I’m more sure than ever. No matter where they send you, I’ll come there. Perhaps even the farther away from your parents and Florida, the better. My darling, you do whatever you think, and I’ll be there come hell, high water, or the complete force of Pinkerton’s detectives.

I called at quarter to ten, and had to wait until one minute to ten to get you. I was afraid they wouldn’t let you talk. And then it was so great, so good.

Don’t worry about me, my physical condition, anything like that; I can take care of myself, and I have many friends here who won’t let me die of pneumonia without filling me full of hundreds of antibiotics first.

Honey, we have to talk again before long. I’ll afford it, don’t worry. Write and tell me when I can call you again, and you won’t have to wait for hours this time. I can call anytime of the day or night. Unfortunately there is no phone where I can be reached directly, but if you call Ed Kain’s, person-to-person to me, Ed will come and find me. He has an unlisted number which cant be gotten through Information. It is university 6-3859. Maybe I could call you Easter Sunday from Providence. I think I will go home for a couple of days, to reassure my mother that I am still alive and kicking. Write to me right away and tell me if I can call you then, or if you can call me, and what time. The telephone number there is stuart (st) 1-3606.

I’m going to send this with a couple of books. The book I am working on for you is still growing, but stopped while I was sick. It is really good, though.

Honey, in your last letter you said you didn’t drink, smoke, curse, use drugs, bite your nails, eat too much, steal, murder, or commit adultery…et cetera…you forgot to mention that you were kind to animals and children, respected motherhood and the flag, and worked hard all your life. Believe me, all those things have little to do with how “good” you or anyone is, and how “sane” you or anyone is. To paraphrase Dostoevski, Fathers and Teachers, I ponder, what is murder? What is stealing? For that matter, what is good or bad?

Jimmy Hoffa doesn’t drink, smoke, loves his family, works very hard, and contrary to public opinion, doesn’t steal. He doesn’t take drugs, probably doesn’t bite his nails, although he might resort to a stray murder now and then. How many people did Einstein murder by suggesting to Roosevelt that we develop an atomic bomb? Or is that murder? Did the U.S. steal from Cuba for two hundred years? Did Americans steal Texas from Mexico, and murder Mexicans when they tried to get it back? Or was that something else? Does your dad steal by taking fees from sick people? Is he murdering us slowly? Did you steal from him when you took his money for everything all your life, and then ran off with me? Is coffee a drug? Is Pepsi-Cola? Is codeine? Is penicillin a drug? Is it wrong to use drugs which have a harmful effect on the system? Like marijuana? Is it all right for doctors to tell people that marijuana leads to other drugs, when it doesn’t? (Even the AMA says so.) Is it selfish to try to be happy? Why should you be happy if it makes your parents sad? Why should they avoid being sad only by making you unhappy? What is the answer to all of this? Could it be that the list you made has no relevance to how the world would be if things were different? Byron, Shelley, Keats, all smoked, drank, used drugs (probably bit their nails). Walt Whitman drank, smoked, was bisexual or perhaps only homosexual. Aldous Huxley used drugs. John F. Kennedy take amphetamine pills (Dexedrine) by doctors’ orders to alleviate an adrenalin deficiency. (He gets high, too, of course.) Is he bad, or crazy? Better not answer that. Hitler didn’t drink, smoked rarely, didn’t bite his nails (chewed rugs instead), didn’t steal, and never personally murdered anyone. Took baths, too.

I’m not sure what the point is, except that I’m a good man. I don’t drink much, although I can and have drunk plenty. I don’t smoke but tried it a couple of times for various reasons. I don’t curse really, but I like words which have color, and hate sterile language. Shakespeare’s plays are full of “cursing.” I’ve tried lots of drugs, and hope to try lots of others. I’m not addicted to anything except maybe Pepsi, but I think the drug experience is really a good thing in every way. I’ve been known to steal, if stealing means to do things such as take books and or food without paying. As for committing adultery, the Catholic Church says, and rightly, I think, that wanting to, thinking about it, entertaining the idea at all, is the same or maybe worse than doing it. In that case I’m afraid I’m guilty about eleventeen hundred and thirteen times a week. But it’s God’s fault, not mine. I didn’t ask for a penis, he gave me one (hah! he can’t have it back, either). And as for being clean, which like all crazy people you mentioned twice, clean is an unbelievable word. You’ve been reading Horatio Alger books again, or maybe the Reader’s Digest.

It strikes me that all those words are just words, to be talking to you. What I want to say is that I love you oh so very much, want you very much. Sandy, my love, my wife, wherever you are, I’ll be there. Whither thou goest, I will go. No one will come in between. Good-night, and I love you.