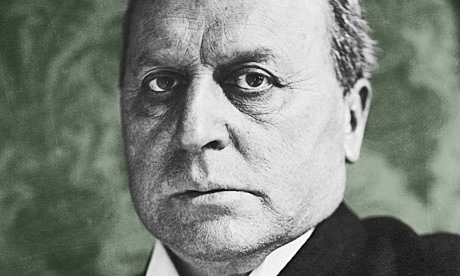 In the letter below, Henry James writes to Violet Paget, apologizing fervently for not having written sooner, before offering acerbic feedback on Paget’s novel, Miss Brown—by then already published.

I take up my pen, as we used to say in our infancy; but who shall say what I can possibly do with it—in such a case? The difficulty is increased by the fact that I am on my knees, prostrate, humble, abject, in the dust. That is an awkward position for articulate and intelligible speech, and yet I can’t hold up my head, or rise to manly stature again, till I have caught some glimpse of a hint of a hope—even from the mere tremor of one of your eyelids—that there lurks in your generous nature, some slight capacity to pardon my disgusting conduct, my odious, unmannerly and inconceivable delay in writing to you. It is more inconceivable to me than to you, I assure you, and I haven’t the slightest hesitation in saying that it is the most discreditable act (if act it can be called!) of an otherwise tolerably decent and virtuous life. Don’t judge me by it, or if so, leave room for an appeal; for I hereby declare to you that the rest of my days shall be devoted to removing from your mind the vile implication my ignoble silence must have produced upon it. I am really not a bad person, to be indebted to for compensation, and compensation you shall have, my dear Miss Paget, if I leave every other future duty and pleasure unregarded. There, I shall sit up again, and even with supplicating eyes, venture to look you in the face; not because I precipitately and fatuously assume that I have been forgiven, but because I do respectfully hope that you have listened.

I read Miss B. with eagerness, of course, as soon as I received the volumes, and have lately read a large part of them over again. It is to me an imperfect, but a very interesting book. As regards the idea of it, the conception and presentation of the character of the heroine, I think it a very fine one. The girl is really a very noble and remarkable vision, and she is sustained with singular evenness, in the key in which you have pitched her—except, I think at the end, in regard to the last fact that you have to relate of her. Making every allowance for a kind of grand rigidity and mournful, dismal, heroism that you have attributed to her—her offspring to marry Hamlin strikes me as false, really unimaginable. Besides, he wouldn’t, I think: he must at last have been immensely afraid of her, and his fear would have been deeper than his vanity. But Anne lives in the mind (outside of that point) as a creature projected (from your intelligence) in all her strange, original, tragic substance and form, with real imaginative and moral superiority. The imperfection of the book seems to me to reside (apart from, occasionally, a kind of intellectualized rowdyism of style) in a certain ferocity. It will probably already have been repeated to you to satiety that you take the aesthetic business too seriously, too tragically, and above all with too great an implication of sexual motives. There is a certain want of perspective and proportion. You are really too savage with your painters and poets and dilletanti; life is less criminal, less obnoxious, less objectionable, less crude, more bon infant, more mixed and casual, and even in its most offensive manifestations, more pardonable, than the unholy circle with which you have surrounded your heroine. And then you have impregnated all those people too much with the sexual, the basely erotic preoccupation: your hand had been violent, the touch of life is lighter. This however is a secondary fact, with regard to the book; the primary one (for me) is that it’s after my own heart in this sense: that it is bravely and richly, and continuously psychological—that, for you, life seems to mean moral and intellectual and spiritual life, and not the everlasting vulgar chapters of accidents, the dead rattle and rumble, which rise from the mere surface of things. I find the donné of Miss Brown exceedingly in the right direction—a real subject, in the full sense of the word; carrying with it the revelation of character which is the base of all things and finding its perspective in that appealing too to the intelligence, the moral sense and experience of the reader. You have appealed—indeed, too much to that sense; and too little to two or three others—the plastic, visual, formal—perhaps. You have proposed to yourself too little to make a firm, compact work—and you have been too much in a moral passion! That has put certain exaggerations, overstatements, grossissements, insistences wanting in tact, into your head. Cool first—write afterwards. Morality is hot—but art is icy!

Excuse my dogmatic and dictatorial tone, and believe it is only an extreme indication of interest and sympathy in what you do. I regard Miss Brown as a most interesting and (if the word didn’t sound so patronizing I should say promising) experiment. It has, in this age of thinnest levity and claptrap, the signal merit of being serious. Write another novel; you owe it to yourself, and to me—to give me a chance to show how prompt I shall be on that occasion! Be, in it, more piously plastic, more devoted to composition—and less moral: for in that last way you will seem (if you care) to your probably readers less immoral than they appear to have found Miss B. Dear Miss Paget—I shall write you again—for my spirit is greatly friendly to you. I shall also soon send you a book. I hope you are well and are coming this summer to England. I don’t venture to breathe a word of the hope of hearing from you: that would be much happiness for yours most faithfully,

Violet Paget (pseudonym “Vernon Lee”) was an early follower of Walter Pater’s Aestheticism. A chronology of her life can be found here

Lyndall Gordon’s A Private Life of Henry James paints the author as a “predatory genius” who willfully possessed peoples’ souls deemed useful to his art. An adequate book review can be found here