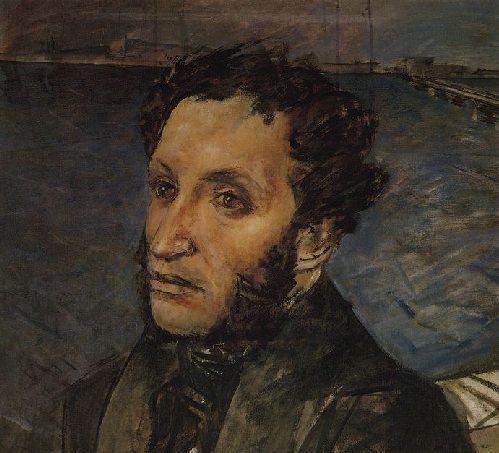 A. N. Vulf was  Alexander Pushkin’s “companion in merrymaking, amorous escapades and carousing. They also used to discuss politics, history and literature together.” Vulf was the son of Praskovia Alexandrovna Osipova, whose estate Pushkin frequently visited. Her daughters, referred to below, were “all in love with the poet and treasured his friendship.” “Some take view that many of the characters in Eugene Onegin are literally ‘copies’ of Pushkin’s neighbors at Trigorskoye.”

En route from Erzurum to Petersburg, I swung to the right and arrived at the Starista District to collect certain arrears. What a pity, dear Lovelace Nikolaevich, that we did not meet here! how we would have infuriated the Barons and simple noblemen! At least I have the honor to present to you a detailed account of our and others’ affairs.

(I) In Malinniki I found Anna Nikolaevna [Vulf] alone with a gumboil and with [Thomas] Moore. She received me with her usual amiability and announced to me the following:

(a) Evpraksia Nikolaevna [Vulf] and Alexandra Ivanovna [Osipova] have left for Starista to see the new uhlans.

(b) Alexandra Ivanovna has busied her imagination partly with Kusovnikov’s waist and back part, partly with Yurgenev’s sideburns and lisping pronunciation.

(c) Gretchen is becoming prettier, and by the hour is becoming more innocent. (Anna Nikolaevna has just now declared that she does not find it so.)

(II) In Pavlovskoe Frederika Ivanovna is suffering from a gumboil; Pavel Ivanovich is versifying with excellent success. A few days ago he corrected the verses you and I wrote, as follows:

Coming up to Izhory, I glanced up at the heavens and remembered your glances, your dark blue eyes.

This is very pretty, isn’t it?

(III) In Bernovo I missed fat-assed Minerva. She had set off with her jealous one for Saratov. On the other hand, Netty [Vulf]—tender, languorous, hysterical, plumpened Netty—is here. Do you know that Miller in despair threw himself at her feet, but she was not touched by that. This is already the third day that I have been in love with her.

(IV) Various News. The priest’s daughter (your Clarissa) is in Tver. Somebody gave Pisarev a beating, and he has been ordered to resign. Prince Maksyutov si more in love than ever. Ivan Ivanovich is on a strict diet (he screws his odalisques once a week). Not long ago we learned that Netty, when she goes to bed, has the habit of making the sign of the cross over all the objects surrounding her bed. I shall try to obtain (as a souvenir of my chaste love) a vessel which has been made holy by her. …Upon this, permit me to conclude my instructive letter.

For more on Pushkin at the Osipova-Vulf estate, click here.