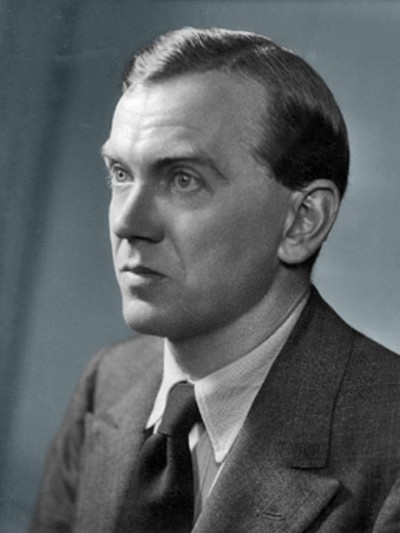 In the following letter, Graham Greene writes with both fondness and respect to fellow author Evelyn Waugh. The two novelists were known for the influence of their Catholic faith on their work, although Greene vehemently objected to be described as a “Catholic novelist.” The letter refers to Waugh’s 1945 novel, Brideshead Revisited, which centers on a Roman Catholic family and their wavering faith. Greene was considering writing the screenplay adaptation, and was intent on preserving the themes of Waugh’s novel. Greene voiced distaste for those he felt misunderstood the novel, such as producer David O. Selznick, and support for those who could appreciate its message, such as French director Jean Delannoy. Waugh eventually withdrew permission to adapt his novel for fear that the project would fall into the hands of the former camp, and it wasn’t until 2008 that a Brideshead film was brought to theaters.

I completely missed the announcement in The Times of the new son and only heard about it on Sunday. Very many congratulations.

Thank you so much for your card. I have in theory agreed to do the script of Brideshead, but it is with great trepidation. For one thing I am very anxious that it should not in any way damage our relationship, and as you know a script writer does not have complete control over a film! I would rather it had been any other man almost than Selznick behind this, because he is an extraordinarily stupid and conventionally-minded man. I told Stone that I would not agree to work in California and I urged him to get a French director for the film, by suggesting the man who made Gide’s Symphonie Pastorale.This director, whose name I have forgotten, is a believing Protestant and the Protestants in France have a somewhat similar position as a minority religion to the Catholics in this country. He struck me when I met him as an extremely perceptive man. I don’t suppose however that Selznick will pay any attention to this suggestion. The trouble is that in order to get a good script one must work almost daily with a sympathetic director, and I can’t think of anyone in England who would have the faintest idea what Brideshead is about. Anyway we might have a certain amount of fun if you collaborate with me and I think it would be essential if one had to go to California to discuss this script with Selznick that we went together. One man is more easily talked round than two.

I expect I will see you today at the D’Arcy dinner for which I am sending my cheque today.

*Do sit me far away from Jeannie & near someone I like!

Watch the trailer for Jean Delannoy’s Symphonie Pastorale, the film mentioned above that impressed Greene.

Explore a gallery of samples of David O. Selznick’s oeuvre.

Read John Mortimer’s 1982 article on his experience with adapting Brideshead Revisited to the (TV) screen.