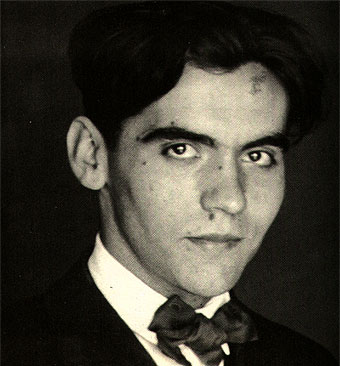 I’m sure I must have acquired a terrible reputation as a bad and lazy friend in your eyes…but forgive me! I’ve gone through a crisis of distances and sorrows that not even I was aware of. One can say that I was a shadow drunk with summer and impossible passion. …I had in my soul, in that unfathomable well from which St. Theresa built her inner castle, a layer of sonorous spikes of wheat and white clouds.

I’ve contemplated the blue sky too much and I have felt real wounds of light. … Along the roads of the Granadan Plain I thought of no one, not even myself. In my meditations with the poplars and the waters, I’ve arrived at the Franciscan stance of Francis Jammes. …I understand that all of this is very lyrical, too lyrical, but lyricism is what will save me before eternity. Besides, we’re in an overwhelming lake of vulgarity and I want my fantastic caravel to travel across it toward the temple of the Exquisite with its sails billowing with snow and sun. I’m like a dream made flesh, and though my horizon is lost in formidable twilights of passion, I have like Prometheus a chain I find hard to drag along. …Not that I’m chained to the rocks…but, instead of an eagle, an owl tears at my heart. All of this is sincere. Total sincerity! To say anything else would be ridiculous and grotesque. I feel full of poetry, strong poetry, simple, fantastic, religious, bad, deep, wicked, mystical. Everything, everything, I want to be all things. Well do I know that the dawn keeps a hidden key in strange forests, but I’ll know how to find it. …Have you read Unamuno’s latest essays? Read them; you’ll enjoy them tremendously…

I’ve done a poem in verse about the Plain of Granada, which will probably see the light this coming summer, but before that I have to publish two books of poetry titled True Elegies and Poem of the Infant Autumn. I don’t know whether I’ll change the titles later; in this I’m very odd, but that’s what I think right now.

The first one will be out in November. Right now I’m involved in my work St. Francis of Assisi, which is something completely new and strange. I’ll send a manuscript of my verses and prose for you to publish. Literature is literature, and he who tries by any means to be a literary figure shows himself to be a fool of the first order. Life is full of roads and on all of them there are bitter and sweet things to be found.

I’ll send you one of the latest things I’ve done, “The Elegy of the Toads.”

As always among friends, I’ll subscribe to the magazine…I would tell you many things, but I feel no inclination to speak. In my soul is a forest full of nests which come to life with the breeze of my great passion.

Forgive me Adriano. May the divine Apollo save you.

I’ll send you my book. Answer me.