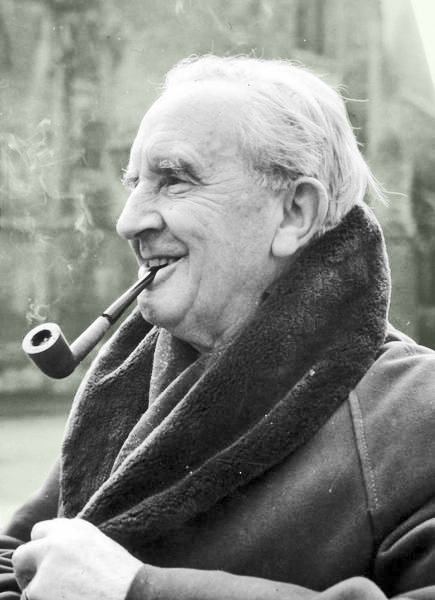 Two years before his death, the seventy-nine-year-old J.R.R. Tolkien was firmly established as a literary figure of considerable repute, as well as a reluctant icon of Sixties counterculture. The Lord of the Rings was still wildly popular sixteen years after publication. Tolkien had initially welcomed the public’s attention with delighted surprise and had replied enthusiastically, and occasionally at great length, to the many fan letters he received. Eventually, however, the spotlight grew so intense that when hobbit enthusiasts continued to appear in his garden, he resorted to moving from Oxford to Bournemouth. Nevertheless, he still elected to enter into correspondence with particularly compelling admirers, as the following letter demonstrates—here, Tolkien explains The Lord of the Rings’ latent sense of divinity, informed by his own lifelong Catholicism. The letter was never sent: Tolkien was distracted by the illness of his wife, Edith, who passed away two months later.

I am sorry that your letter (written on August 20th) was delayed in reaching me, and has then again waited so long for an answer. I am harassed by many things and the endless ‘business’ of my affairs; and I am in constant anxiety owing to my wife’s failing health. […]

I was much interested in your references to M. R. Ridley. We of course knew one another well at Oxford. […] Not until I got your letter did I learn that he had done me the honour of placing the works of his old colleague in the ranks of ‘literature’, and gaining me intelligent and well-equipped readers. Not a soil in which the fungus-growth of cults is likely to arise. The horrors of the American scene I will pass over, though they have given me great distress and labour. (They arise in an entirely different mental climate and soil, polluted and impoverished to a degree only paralleled by the lunatic destruction of the physical lands which Americans inhabit.) […]

I am very grateful for your remarks on the critics and for your account of your personal delight in The Lord of the Rings. You write in terms of such high praise that [to] accept it with just a ‘thank you’ might seem complacently conceited, though actually it only makes me wonder how this has been achieved—by me! Of course the book was written to please myself (at different levels), and as an experiment in the arts of long narrative, and of inducing ‘Secondary Belief’. It was written slowly and with great care for detail, & finally emerged as a Frameless Picture: a searchlight, as it were, on a brief episode in History, and on a small part of our Middle-earth, surrounded by the glimmer of limitless extensions in time and space. Very well: that may explain to some extent why it ‘feels’ like history; why it was accepted for publication; and why it has proved readable for a large number of very different kinds of people. But it does not fully explain what has actually happened. Looking back on the wholly unexpected things that have followed its publication—beginning at once with the appearance of Vol. I—I feel as if an ever darkening sky over our present world had been suddenly pierced, the clouds rolled back, and an almost forgotten sunlight had poured down again. As if indeed the horns of Hope had been heard again, as Pippin heard them suddenly at the absolute nadir of the fortunes of the West. But How? and Why?

I think I can now guess what Gandalf would reply. A few years ago I was visited in Oxford by a man whose name I have forgotten (though I believe he was well-known). He had been much struck by the curious way in which many old pictures seemed to him to have been designed as to illustrate The Lord of the Rings long before its time. He brought one or two reproductions. I think he wanted at first simply to discover whether my imagination had fed on pictures, as it clearly had been [fed] by certain kinds of literature and languages. When it became obvious that, unless I was a liar, I had never seen the pictures before and was not well acquainted with pictorial Art, he fell silent. I became aware that he was looking fixedly at me. Suddenly he said: ‘Of course you don’t suppose, do you, that you wrote all that book yourself?’

Pure Gandalf! I was too well acquainted with G. to expose myself rashly, or to ask what he meant. I think I said: ‘No, I don’t suppose so any longer.’ I have never since been able to suppose so. An alarming conclusion for an old philologist to draw concerning his private amusements. But not one that should puff any one up who considers the imperfections of ‘chosen instruments’, and indeed what sometimes seems their lamentable unfitness for the purpose.

You speak of ‘a sanity and a sanctity’ in the L.R. ‘which is a power in itself’. I was deeply moved. Nothing of the kind had been said to me before. But by a strange chance, just as I was beginning this letter, I had one from a man, who classified himself as ‘an unbeliever, or at best a man of belatedly and dimly dawning religious feeling… but you’, he said, ‘create a world in which some sort of faith seems to be everywhere without a visible source, like light from an invisible lamp’. I can only answer: ‘Of his own sanity no man can securely judge. If sanctity inhabits his work or as a pervading light illumines it then it does not come from him but through him. And neither of you would perceive it in these terms unless it was with you also. Otherwise you would see and feel nothing, or (if some other spirit was present) you would be filled with contempt, nausea, hatred. “Leaves out of the elf-country, gah!” “Lembas – dust and ashes, we don’t eat that.”

Of course The L.R. does not belong to me. It has been brought forth and must now go its appointed way in the world, though naturally I take a deep interest in its fortunes, as a parent would of a child. I am comforted to know that it has good friends to defend it against the malice of its enemies. (But all the fools are not in the other camp.) With best wishes to one of its best friends. I am

Read an article on the relationship between Tolkien and C.S. Lewis, and the latter’s conversion to Christianity.

Read more of Tolkien’s letters; including, here, a defense of his “archaic” narrative style.

Watch a highly entertaining 1968 BBC documentary featuring Tolkien (and others) discussing The Lord of the Rings.

Read an account of Tolkien’s involvement in compiling the Oxford English Dictionary.