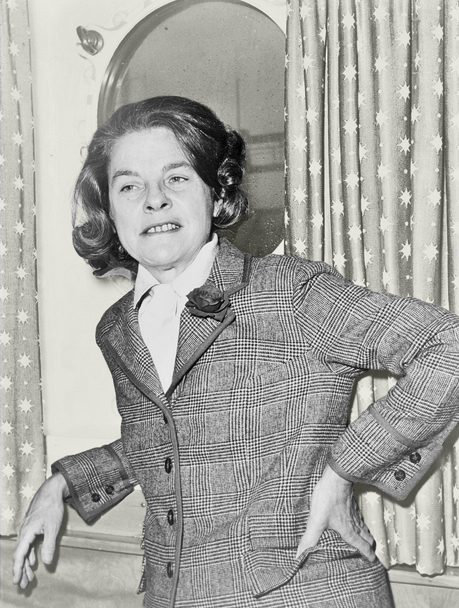 Here, Mary McCarthy writes to Hannah Arendt, the prominent scholar and her close friend, about her travels in Lisbon with her third husband, Bowden Broadwater. She describes the boarding house where they are residing, adding colorful observations about the Portuguese economy and the “Americanization” of its culture. Her meeting with the official from the Ministry of Propaganda is documented in “Mister Rodriguez of Lisbon,” a piece published in Harper’s in 1955.

It’s snowing cats and dogs here, the first time, they say, in either a hundred or ten years—I can’t make out which. Hence, an afternoon that can be given to letter-writing; every other day, after lunch, we’ve been walking our shoes off. We’ve done most of the churches, the Alfame, the Botanical Gardens, which are enchanting, I think—a real national expression—the American library, the English library, shops, hotels, coffee-houses. The first night we walked to the Rossio and tried to find the cafe that you and Heinrich would have had a coffee at. But I don’t think we succeeded.

We’re in a pension, where we seem to be the only guests, though other lodgers are alluded to. The former proprietress, recommended by Leonid [Berman], the painter, went mad some years ago, it seems, and the place is Under New Management. I fear it is a sinking ship. But we have two rooms, one very large, with a balcony and a wonderful view over the harbor. The new Madame is a Mlle. Carole, in her late thirties, smoking a perpetual cigarette and wearing a red bolero jacket and a little English shirtwaist buttoned up at the neck. She has a certain Marlene Dietrich melancholy grace that indicates, I think, that she is about to be ruined financially. She is half French, half Swedish, with a fat French maman in a black dress and a look of powdered resignation. They keep listening to the French radio and talking in four languages: German, French, English, and Portuguese. They despise and despair of the Portuguese, i.e., the help. The cooking is very fitful, like the weather; when the Portuguese cook cooks, it’s very mediocre; when Madame cooks, it’s good; when Maman cooks, it’s superb. Like all people in an insecure situation, they seem to have the power of mind-reading. They know exactly the moment when we’re deciding to try another place, and Maman proceeds to the kitchen: that night the dinner is worthy of La Pérouse. But there’s a general air of hovering creditors, help leaving, confusion, fuses blowing; in short, I find it very sympathetic and Bowden has now been placated by a tour of the other pensions, and the location here is awfully convenient, high up, just above and west of the Chiado. Naturally, we’re being overcharged, by Portuguese standards, but we console ourselves with the fact that we have only to express a wish and the whole boarding-house springs into action. This is because, I know, we’re Americans. And Americans, to these people, are like some primitive deity, a cluster of unforeseeable and mysterious Wants that have to be gratified and if possible anticipated. They have some of the strangest ideas of what we might be likely to to want, timid, hopeful ideas, like offerings. At present, we have a gas-heater in our room, but the boy keeps coming up with an electric heater too, though it’s the only one in the house and we don’t need it in the least.

I don’t know how long we’ll stay here. They say the Algarve, in the south, where we plan to go eventually, is completely covered with snow, though the mimosa is supposed to be out. Did I tell you the New Yorker has asked me to do a Letter from Portugal? Yesterday I went to see our press attaché, who seems quite decent and spoke of Plato. To me, the most striking thing here is the phenomenon of Americanization. American business interests, Ford, Buick, International Telephone, TWA, are very active; there are thousands of new cars on the streets and in the shop windows radios, frigidaires, pressure cookers, baby bathinets, many of American make. The strangest thing to see along the Rua Garrett—the principal shopping street—boxes of Ritz crackers enshrined in red velvet, a whole window devoted to them; and another window to Tootsie Rolls. There’s a kind of childlike or primitive pathos in this; their own confections and cakes are so charming—you must remember. And everywhere, in the suburbs, and even in the city itself, Housing Projects are springing up. I must say, they do them better than we do.

I don’t know anything about the country politically yet. It seems quite puzzling on the economic level, a strange mixture of prosperity and poverty. The prosperity must be quite widespread throughout the city middle-class, but I can’t figure out where it’s coming from. The tea and coffee-houses are jammed with well-dressed men and women, whom you’d take for business people in the U.S. or even secretaries and salesmen; all the middling-class younger people, in fact, look very American, as if they’d modeled their gestures and expressions on the movies —it’s only the aristocracy and the poor who look what I would call Portuguese. (I find this very different from Italy or France.) On the other hand, the factory-made product in the shop windows, even on the best streets, are very shoddy—I mean shoes, bags, dresses, men’s shirts. Everything has a sort of Gimbel’s basement or fire sale look. And there seem to be no handicrafts at all—only some very cheap gaudy peasant stuff, very inauthentic, the kind of thing you might buy in the railroad station for a souvenir. On the back streets and in the Alfame, there is plenty of medieval poverty, like Africa, as you say, or like the most graphic pages of Les Misérables or the Hunchback of Notre Dame.

Well, I must stop. It’s getting dark and one thing I’ve not been able to secure in this pension is a good reading or writing light. I’ll send you another report before long. If you have a minute, drop me a line here. We both talk of you constantly. Where did you stay in Lisbon, I wonder. In what quarter?

Tomorrow I see the number two man in the Ministry of Propaganda. The only other native we’ve met is a male ballet-dancer, also recommended by Leonid, who is going to take us tomorrow night to hear the Fado in the Alfame.

Much, much love to you both,
Mary