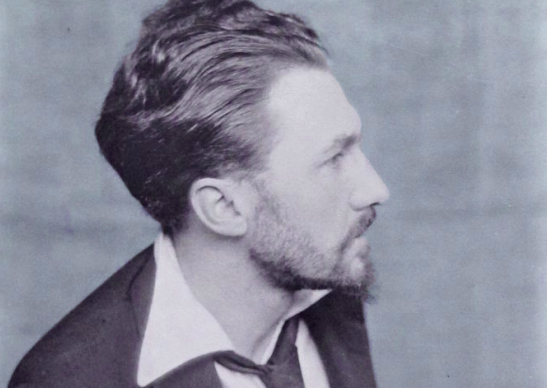 Ezra Pound and William Carlos Williams met while they were still students at the University of Pennsylvania. They quickly became friends and admirers of each other’s work.  This letter, however, finds the two young poets playfully rebuking one another.

Dear Bill: Glad to hear from you at last.

Good Lord! of course you don’t have to like the stuff I write. I hope the time will never come when I get so fanatical as to let a man’s like or dislike for what I happen to ‘poetare’ interfere with an old friendship or a new one.

Remember, of course, that some of the stuff is dramatic and in die character of die person named in the title.

I am damn glad to get some sincere criticism anyhow. Now let me to die defense. It seems to me you might as well say that Shakespeare is dissolute in his plays because Falstaff is, or that the plays have a criminal tendency because there is murder done in them.

To me the short so-called dramatic lyric—at any rate the sort of thing I do—is the poetic part of a drama the rest of which (to me the prose part) is left to the reader’s imagination or implied or set in a short note. I catch the character I happen to be interested in at the moment he interests me, usually a moment of song, self-analysis, or sudden understanding or revelation. And the rest of the play would bore me and presumably the reader. I paint my man as I conceive him. Et voila tout!

Is a painter’s art crooked because he paints hunch-backs?

However, speak out and don’t become ‘powerless to write that you don’t like.’ There is one thing sickly-sweet: to wit, the flattery of those that know nothing about the art and yet adore indiscriminately.

To your ‘ultimate attainments of poesy,’ what are they? I, of course, am only at the first quarter-post in a marathon. I have, of course, not attained them, but I wonder just where you think the tape is stretched for Mr. Hays, ‘vittore ufficiale,’ and Dorando Pietri, hero of Italy. (That was by the way delightful to get in Italy and to get here one of the men who arranged the events, one of the trainer sort who said Pietri would have never got there if he hadn’t been helped. I wish, no fooling, that you would define your ultimate attainments of poesy. Of course we won’t agree. That would be too uninteresting. I don’t know that I can make much of a list.

4. It is only good manners if you repeat a few other men to at least do it better or more briefly. Utter originality is of course out of the question. Besides the Punch Bowl covers that point.

Then again you must remember I don’t try to write for the public. I can’t. I haven’t that kind of intelligence. ‘To such as love this same beauty that I love somewhat after mine own fashion.’

Also I don’t want to bore people. That is one most flagrant crime at this stage of the world’s condition. 19 pages of letter ought to prove that. I am hopeless. ‘Ma cosi son io.’ Your letter is worth a dozen notes of polite appreciation. Eccovi, an honest man. Diogenes put to shame.

Write now that the bars are down and tear it up. You may thereby help me to do something better. Flattery never will.

My days of utter privation are over for a space.

FURTHER READING
Find here a 1939 review Williams wrote of Pound’s Culture. Note how Williams’ respect for his colleague still seeps into what is actually quite mixed praise.