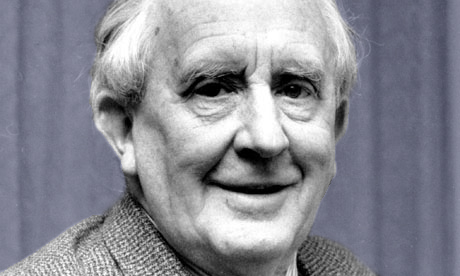 Below, J. R. R. Tolkien to his son Christopher, discussing new chapters of his Lord of the Rings trilogy; a beautiful, disquieting Christmas experience; and the hatred of democracy among the philosophers and oligarchs in ancient Greece. At the time (1944), Christopher—his youngest son—was away from home, serving in the Royal Air Force.

You have no need to reproach yourself! We are getting lots of letters from you, and v. quickly…..I am glad the third lot of Ring arrived to date, and that you like it—although it seems to have added to yr. homesickness. It just shows the difference between life and literature: for anyone who found himself actually on the stairs of Kirith Ungol would wish to exchange it for almost any other place in the world, save Mordor itself. But if lit. teaches us anything at all, it is this: that we have in us an eternal element, free from care and fear, which can survey the things that in ‘life’ we call evil with serenity (that is not without appreciating their quality, but without any disturbance of our spiritual equilibrium). Not in the same way, but in some such way, we shall all doubtless survey our own story when we know it (and a great deal more of the Whole Story). I am afraid the next two chapters won’t come for some time (about middle of Jan) which is a pity, as not only are they (I think) v. moving and exciting, but Sam has some interesting comments on the rel. of stories and actual ‘adventures’. But I count it a triumph that these two chapters, which I did not think as good as the rest of Book IV, could distract you from the noise of the Air Crew Room!….

The weather has for me been one of the chief events of Christmas. It froze hard with a heavy fog, and so we have had displays of Hoarfrost such as I only remember once in Oxford before (in the other house I think) and only twice before in my life. One of the most lovely events of Northern Nature. We woke (late) on St Stephen’s Day to find all our windows opaque, painted over with frost-patterns, and outside a dim silent misty world, all white, but with a light jewelry of rime; every cobweb a little lace net, even the old fowls’ tent a diamond-patterned pavilion. I spent the day (after chores, that is from about 11.30, as I got up late) out of doors, well wrapped up in old rags, hewing old brambles and making a fire the smoke of which rose in a still unmoving column straight up into the fog-roof….. The rime was yesterday even thicker and more fantastic. When a gleam of sun (about 11) got through it was branching spray against a golden light and, high overhead, a pale translucent blue. It did not melt. About 11 p.m. the fog cleared and a high round moon lit the whole scene with a deadly white light: a vision of some other world or time. It was so still that I stood in the garden hatless and uncloaked without a shiver, though there must have been many degrees of frost…..

Mr Eden in the house the other day expressed pain at the occurrences in Greece ‘the home of democracy’. Is he ignorant, or insincere? [‘Democracy’] was not in Greek a word of approval but was nearly equivalent to ‘mob-rule’; and he neglected to note that Greek Philosophers—and far more is Greece the home of philosophy—did not approve of it. And the great Greek states, esp. Athens at the time of its high art and power, were rather Dictatorships, if they were not military monarchies like Sparta! And modern Greece has as little connexion with ancient Hellas as we have with Britain before Julius Agricola…..