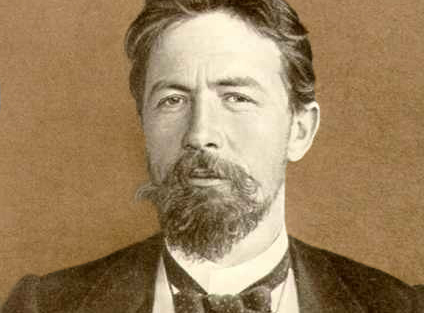 Anton Chekhov wrote to Leo Tolstoy often; most of his letters were met with a resounding silence. Anxious about Tolstoy’s well-being, Chekhov would then turn to the newspapers for news of his friend’s health. In the following letter his medical training turns neurotic, as he diagnoses the symptoms of Tolstoy’s rumored illness. While Chekhov was writing the letter below, Tolstoy was enjoying good health and a highly active life in Moscow. He had just attended the January 24th performance of Uncle Vanya, whose “repellent” morals prompted him to remark to Chekhov, “you know I can’t stand Shakespeare, but your plays are even worse than his.”

Tolstoy’s illness is beyond me. Cherinov hasn’t answered my letter, and it’s impossible to draw any conclusions from what the newspapers say of from what you now written. Intestinal or stomach ulcers would involve different symptoms. So he doesn’t have any, or he may have had several bleeding lacerations caused by gallstones which passed and wounded the intestinal wall. Nor does he have cancer, because cancer would have shown itself in a loss of appetite and in his general condition, but above all, his face would have betrayed it, if he had cancer. No, Lev Nikolayevich is most probably well (except for the gallstones) and has another twenty years ahead of him. His illness frightened me and made me very tense. I fear Tolstoy’s death. His death would leave a large empty space in my life. First, I have loved no man the way I have loved him. I am not a believer, but of all beliefs I consider his the closest to mine and most suitable for me. Second, when literature has a Tolstoy, it is easy and gratifying to be a writer. Even if you are aware that you have never accomplished anything and are still not accomplishing anything, you don’t feel so bad, because Tolstoy accomplished enough for everyone. His activities provide justification for the hopes and aspirations that are usually placed on literature. Third, Tolstoy stands firm, his authority is enormous, and as long as he is alive bad taste in literature, all vulgarity in its brazen-faced or lachrymose varieties, all bristly or resentful vanity will remain far in the background. His moral authority alone is enough to maintain what we think of as literary trends and schools at a certain minimal level. If not for him, literature would be a flock without a shepherd or an unfathomable jumble.

To finish with Tolstoy, let me say a word about Resurrection, which I read in one sitting, and not in bits and snatches. It is a remarkable work of art. The least aspect is everything pertaining to Nekhlyudov’s relationship with Maslova; the most interesting—the princes, generals, Nekhlyudov’s aunts, peasants, prisoners and prison wardens. I could barely breathe as I read the scenes with the general who is both the commandant of the Peter ad Paul Fortres and a spiritualist—it was so good! And Madame Korchagina carried around in her chair and Fedosya’s peasant husband! The peasant says his wife can handle anything. That’s just what Tolstoy’s pen is live—it can handle anything. The novel has no ending; what it does have can’t be called an ending. To write so much and then suddenly make a Gospel text responsible for it all smacks a bit too much of the seminary. Resolving everything by a Gospel text is as arbitrary as dividing prisoners into five categories. Why five and not ten. What a Gospel text and not a text form the Koran? First he has to force his readers to believe in the Gospel, to believe that it alone is the truth, and only then can he resolve everything by the text.

Have I bored you? When you come to the Crimea, I’m going to do an interview with you and print it in News of the Day. What reporters write about Tolstoy is like what old women say about holy idiots—unctuous nonsense.
[…]

I’ll be sure to send you my photograph. I am happy to be elected a member of the Academy because it’s gratifying to know that Sigma is envious of me now. I’ll be even happier, though, when I lose the title after some misunderstanding, because the scholars of the Academy are always afraid we’re going to shock them. They elected Tolstoy only grudgingly. In their eyes he’s a nihilist. At that’s what a certain lady—the wife of a privy councilor—has called him, which I think is cause for giving him my heartfelt congratulations.
[…]

Chec
Yours,
A. Chekhov

A recent retrospective asks Chekhov’s question: is Tolstoy the greatest writer of all time?