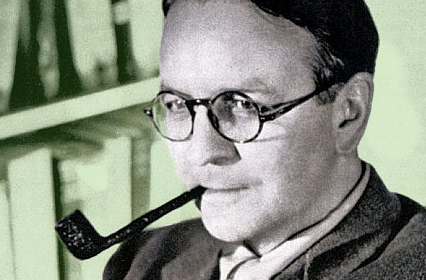 In addition to writing detective novels, Raymond Chandler enjoyed a successful career in film and television. Here, he shares some of his views on the unscriptability of Scripture with his television agent, Edgar Carter.

By the way, do you ever read the Bible? I suppose not very often, but I had occasion to the other night and believe me it is a lesson in how not to write for the movies. The worst kind of overwriting. Whole chapters that could have been said in one paragraph. And the dialogue! I bet you Macmillan’s are sore as hell they didn’t get to publish it. They could have made it a best-seller easy. And as for getting it banned in Boston I don’t think they’d even have to grease the Watch and Ward Committee to put the red light on it.

To read the excellent opening paragraphs to Chandler’s The Big Sleep, click here

If you feel inclined to delve into the wealth of criticism on Chandler, read here the notes to a lecture about individualism and violence in Chandler’s work