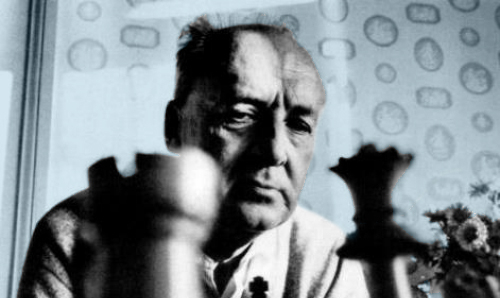 Below, Nabokov responds to Hitchcock’s letter of 19 November with a few screenplay ideas of his own. Hitchcock would reply that his needs were “immediate and urgent,” adding that, while the second idea did not interest him, he found the first intriguing.

Many thanks for your letter. I find both your ideas very interesting. The first would present many difficulties for me because I do not know enough about American security matters and methods, or how the several intelligence bureaus work, separately and together.

Your second idea is quite acceptable to me. Given a complete freedom (as I assume you intend to give me) I think I could turn it into a screenplay. But there would be the matter of time. What delays did you have in mind? I am at the present very busy winding up several things at once. I could devote some thought to the screenplay this summer but could hardly settle down to work on it yet. Please let me know what are your ideas about this.

In the meantime I, too, would like to give you a short resume of two ideas of my own. You will find them, very baldly jotted down, on the separate sheet attached to this letter. Please let me know what you think of them. If you like them, we might discuss their development.

It was good talking to you on the telephone.

A girl, a rising star of not quite the first magnitude, is courted by a budding astronaut. She is slightly condescending to him; has an affair with him but may have other lovers, or lover, at the same time. One day he is sent on the first expedition to a distant star; goes there and makes a successful return. Their positions have now changed. He is the most famous man in the country while her starrise has come to a stop at a moderate level. She is only too glad to have him now, but soon she realizes that he is not the same as he was before his flight. She cannot make out what the change is. Time goes, and she becomes concerned, then frightened, then panicky. I have more than one interesting denouement for this plot.

While ignorant of the workings of the American intelligence, I have gathered considerable information regarding those of the Soviets.

For some time now I have been thinking of writing the story of a defector from behind the Iron Curtain to the United States. The constant danger he is in, the constant necessity to hide and be on the lookout for agents from his native land bent on kidnapping or killing him.