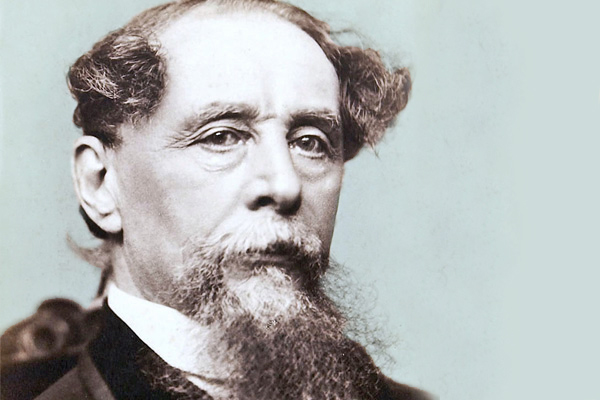 After first meeting Maria Winter née Beadnell in 1930, Charles Dickens fell into a fervent—and unreciprocated—love for four years. Twenty-five years later, a married Maria Winter wrote to Dickens once again: she now past her “state of Spring,” and he was a celebrated author. The paths of their lives had not yet crossed again. Upon their meeting, Dickens’ image of Maria Winter crumbled before the reality of an aged Mrs. Henry Beadnell. In this letter, he speaks to her of writerly restlessness in a tone that seems to be composed of equal parts wanderlust and avoidance.

Going down to Ashford this day week, already with a bad cold, I increased it so much by getting into the interns heat consequent upon a reading of three hours and then coming up in the night (which I was obliged to do, having business in town next morning), that I was very unwell all the week, and on Friday night was so completely knocked up that I came home at 9 o’Clock to bed. A necessity is upon me now—as at most times—of wandering about in my own wild way, to think. I could no more resist this on Sunday or yesterday, than a man can dispense with food, or a horse can help himself from being driven. I hold my inventive capacity on the stern condition that it must master my whole life, often have complete possession of me, make its own demands upon me, and, sometimes for months together, put everything else away from me. If I had not known long ago that my place could never be held, unless I were at any moment ready to devote myself to it entirely, I should have dropped out of it very soon. All this I can hardly expect you to understand—or the restlessness and waywardness of an author’s mind. You have never seen it before you, or live with it, or had occasion to think or care about it, and you cannot have the necessary consideration for it. “It is only half an hour”—”it irony an afternoon”—”it is only an evening”—people say to me over and over again—but they don’t now that it is impossible to command one’s self sometimes to any stipulated and set disposal of five minutes—or that the mere consciousness of an engagement will sometimes worry a whole day. These are the penalties paid for writing books. Whoever is devoted to an Art must be content to deliver himself wholly up to it, and to find his recompense to it. I am grieved if you suspect me of not wanting to see you; but I can’t help it; I must go my way, whether or not.

I thought you would understand that in sending the card for the box, I sent an assurance that there was nothing amiss. I am pleased to find that you were all so much interested with the play [Dion Boucicault’s Janet Pride]. My ladies say that the first part is too painful and wants relief. I have been going to see it a dozen times, but have never seen it yet, and never may, Madame Celeste is injured thereby (you see how unreasonable people are!) and says in the Green Room, with a very tight cheek, “M. Dickens est artiste! Mais il n’a jamais vu Janet Pride!” [Mr. Dickens is an artist! But he’s never seen Janet Pride!]

It is like a breath of fresh spring air to know that unfortunate Baby of yours is out of her one closed room and has about half a pint of very doubtful air per day. I could only have become her Godfather on the condition that she had 500 gallons of open air at any rate, every day of her life. And you would soon see a rose or two in the face of my other little friend, Ella, if you opened all your doors and windows throughout the whole of all fine weather, from morning to night.

I am going off, I don’t know where or how far, to ponder about I don’t know what. Sometimes I am half in the mood to set off for France, sometimes I think I will go and walk about on the sea shore for three or four months, sometimes I look towards the Pyrenees, sometimes Switzerland. I made a compact with a great Spanish authority last week, and vowed I would go to Spain. Two days afterward, Layard and I agreed to go to Constantinople when Parliament rises. Tomorrow I shall probably discuss with somebody else, the idea of going to Greenland or the North Pole. The end of all this most likely, will be, that I shall shut myself up in some out of the way place I have never yet thought of, and go desperately to work there.

Once upon a time I didn’t do such things you say. No. But I have done them through a good many years now, and they have become myself and my life.

Janet Pride, the mentioned play which Dickens never got around to seeing, ran from 1854-1855 at the Adelphi Theatre in London’s West End; click here for a review of the play’s reception

Part of the reason why Dickens’ love for Maria Winter was impossible was due to her higher social stature—for a further consideration of this wrinkle and its relationship to the young Dickens’ experience, click here