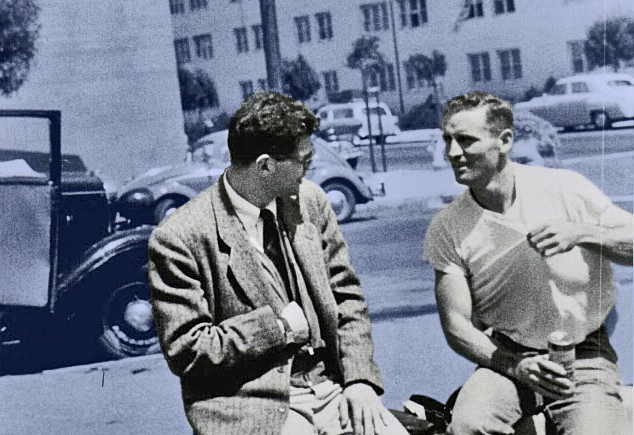 In a letter to his friend and lover Neal Cassady, Allen Ginsberg discusses Kerouac’s new book, Visions of Cody (“a holy mess—it’s great all right but he did everything he could to fuck it up with a lot of meaningless bullshit”), as well as his own feelings of emptiness.

Whyn’t you answer my last letter? Too flip?

I have your manuscript beginning of novel from Carl. I would send it to you but I think there’s a chance of publishing the section beginning with your own remembrances (excluding the historical preface) in the New Directions annual anthology. I’ll give it to them, they may not take it, or they may—we’ll see.

I reread it incidentally. I thought the parent’s intro was too tight and in a way dull, except for moments like the porch—or Harper’s dump house. Maybe it’s the strain of point of view or strain of writing; and maybe as it is it would still be appropriate for a beginning when the whole thing is done.

The main body, where you begin with yourself is very good and swings and is actually interesting to read (to a total objective outsider’s eyes). I think it’s ripe enough to try to publish as is…

Jack’s book [Visions of Cody] arrived and it is a holy mess—it’s great all right but he did everything he could to fuck it up with a lot of meaningless bullshit I think, page after page of surrealist free association that don’t make sense to anybody except someone who has blown Jack. I don’t think it can be published anywhere, in its present state. I know this is an awful hang-up for everyone concerned—he must be tired too—but that’s how it stands I think. Your tape conversations were good reading, so I could hear what was happening out there—but he put it in entire and seemingly un-unified so it just skips back and forth and touches on things momentarily and refers to events nowhere else in the book; and finally it appears to objective eye so diffuse and disorganized—which it is, on purpose—that it just don’t make. Jack knows that too, I’ll bet—why is he tempting rejection and fate? Fucking spoiled child, like all of us maybe, but goddam it, it ain’t right to take on so paranoiac just to challenge and see how far you can go—when there’s so much to say and live and do now, how hard it is albeit. Jack is an ignu [kindred spirit] and I will bow down to him, but he done fuck up his writing money-wise, and also writing wise. He was not experimenting and exploring in new deep form, he was purposely just screwing around as if anything he did, no matter what he did, was O.K. no bones attached. Not purposely, I guess, just drug out and driven to it and in a hole in his own head—but he was in a hole. I don’t know what he’ll say when I say this to him—he comes back to N.Y. this week or next I think—and how he’ll make out, with all this shit to shovel around, I dunno. I will try to help but I feel so evil when I not agree in blindness. Well shit on this you git the point…

I will stay on in N.Y. longer. When I begin wandering in space, and among the subterraneans, and into the hung-up literary corridors, I get hung up on everything but the real pressures—money, love. Anyway I want to set myself up independent again, with a small apartment, a steady secure job, start laying again. With Dusty I seldom lay and it is no good really, though I like her alright.

I still have love longings and yet have not in my lifetime founded a relationship with anyone which is satisfactory and never will unless I change and grow somehow out of this egoistic grayness and squalor. Drifting like I am or could would leave me with no hope but stolen fruits. I had begun to get hung up on the metaphysical image and the subterranean peyotelites here. Must stop playing with my life in a disappointed grey world. Maybe go back to analysis. I am miserable now—not feeling unhappiness, just lack of life coming to me and coming out of me—resignation to getting nothing and seeking nothing, staying behind shell. The glare of unknown love, human, unhad by me,—the tenderness I never had. I don’t want to be just a nothing, a sick blank, withdrawal into myself forever. I can’t turn to you for that any more, can’t come to Frisco for you, because how much you love me, it is still something wrong, not complete, not still enough, not—god knows what not—you know how I was before and what I am, my hang-ups. Do you think that is all I shall get ever, so that is why I should come out? Maybe that is not bad idea but I still want to seek more. I suppose maybe I’m looking too hung-up at a simple sociable proposition.

I guess that’s true, too—I haven’t reread this—but I started off trying to say what I’m feeling. I just want something, beside the emptiness I’ve carried around in me all my life. Bliss of tenderness I think of, but that’s too monomaniacal and soft-hearted—maybe I should go out of myself somehow here and keep trying to get back to life.

So anyway I will I guess stay here and live it out like a man. What this doesn’t sound like.

I am real tired, but it is sleep-fatigue, not work fatigue. I live in an inactive lethargy of thinking and running around and doing everything but what I need to do to keep myself comfortable and happy.

Well write me, I would like to hear from you, dear Neal.

Whatever this letter means I have just given you the picture as it runs thru my mind.

Maybe a change of scene would be good. I may come out there yet. I suppose someday I’ll regret not just jumping out there on a rainbow.

View clips of a 1965 conversation with Allen Ginsberg and Neal Cassady here.

Find a detailed biography and bibliography of Ginsberg from the Poetry Foundation here.