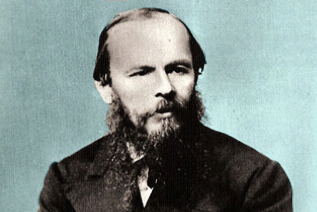 When Fyodor Dostoevsky met his first wife Maria Dmitrievna Isaeva in Semipalatinsk just after his release from prison, she was already married to Alexander Ivanovich Isaev, a struggling civil servant. In today’s letter, written just after the Isaev family relocated to Kusnezk, Dostoevsky describes how much their friendship meant to him, and seems to reveal some deeper feelings. They wed in February of 1857, almost two years after this letter was written.

From Semipalatinsk to Kusnezk [in the Tomsk Government],
June 4, 1855.

A thousand thanks for your dear letter on the journey, my dear and unforgettable friend Maria Dmitriyevna. I hope that you and Alexander Ivanovitch will allow me to call you both friends. We certainly were friends here, and I trust we shall remain so. Is mere separation to alter us? I believe not; for the parting from you, my dear friends, lies so heavily upon me that alone I can judge how very much I cling to you. …

How did you arrive at Kusnezk? I hope and pray that nothing happened to you on the way. You write that you are depressed and even ill. So I am most anxious about you. The mere move caused you such trouble and such unavoidable discomforts, and now there’s this illness added! How are you to bear it all? I can think of nothing but you. You know how apprehensive I am, so you can picture my anxiety. My God, how little you—you, who might be an ornament to any society—deserve this fate with all its petty cares and contrarieties! Accursed destiny! I await your letter with impatience. … You ask me how I pass the time, and how I arrange my day without you. For a fortnight I have not known what to do with myself, so sad am I. If you only knew how orphaned I now feel! It is just like the time when they arrested me in 1849, put me in prison, and tore me from all that I loved and prized. So very much had I grown to you. I never looked upon our intercourse as an ordinary acquaintanceship, and now, when I no longer have you near me, I begin to understand many things. I have lived for five years entirely without human relations—quite alone, without a creature to whom I could open my heart. But you two treated me like a brother. I remember that from the very first, I felt at home in your house. Alexander Ivanovitch could not have been kinder to his own brother than he was to me. With my unendurable character, I must have caused you much vexation, and yet you both loved me. I recognize it and feel it, for indeed I am not quite heartless. You are a wonderful woman; you have a heart of rare child-like kindliness, and you were like a sister to me. The mere fact that a woman should treat me in so friendly a way was a great event in my life. For even the best man is often, if I may say so, a block. Woman’s heart, woman’s compassion, woman’s sympathy, the endless kindness of which we have no clear perception, and which, in our obtuseness, we often do not even notice—these are irreplaceable. All that I found in you; even apart from my many failings, a sister could not have been kinder and more tactful to me than you were. If we did go through some violent upheavals, it was always because I was ungrateful, and you were ill, exacerbated, and wounded; you were wounded because the disgusting society-folk neither prized nor understood you, and anyone with your energy must revolt against all injustice, and that revolt is noble and dignified. These are the essential features of your character; suffering and circumstances have naturally distorted much in you—but, by God, with what usurer’s interest was any such failing always redeemed! And since I was not stupid all the time, I saw and treasured it. In one word, I had to love your house as my very own home—I could not do otherwise. I shall never forget you both, and shall be ever grateful to you. For I am convinced that neither of you has the least idea of all you did for me, and how very necessary to me were just such people as you. If I had not had you, I should most likely have turned into a block of wood; but now I am a human being again. But enough; it is not to be expressed, least of all in a letter. I curse this letter, because it reminds me of our parting; everything reminds me of that. In the twilight, in those hours when I used to go to you, such grief overwhelms me that I could weep if I were at all prone to do so; and I know you would not laugh at my tears. Once for all, my heart is so constituted that everything it loves and treasures grows deeply rooted in it, and when uptorn, causes wounds and suffering. …

Farewell, unforgettable Maria Dmitriyevna—farewell! We shall meet again, shan’t we? Write to me very often and very much, write to me about Kusnezk, about the new people you know, and as much as possible about yourself. Kiss Pasha from me. Farewell, farewell—oh, when shall we see one another again?