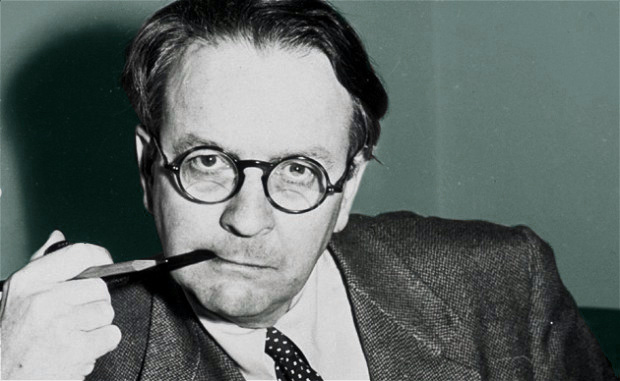 Raymond Chandler sought to elevate the noir genre to a high art form. Modeling himself after Alexander Dumas, Gustave Flaubert, and Joseph Conrad, he disparaged those who failed to understand his work in such terms. When Picture Post (a London-based pop culture magazine comparable to LIFE) sent  an interview to Chandler’s agent, Eddie Carter, Chandler was outraged by the mindlessness of the questions asked. Below, he vents to Carter about the Post’s editors and their apparent inability to distinguish between characters and their authors.

The Picture Post is for people who move their lips when they read. Surely they can get anything they want from my English publisher, Hamish Hamilton, Ltd., 90 Great Russell Street, London, W.C. 1. The questions you quote would seem to me indicate the intellectual level of the editorial department of the Picture Post. Yes, I am exactly like the characters in my books. I am very tough and have been known to break a Vienna roll with my bare hands. I am very handsome, have a powerful physique, and change my shirt regularly every Monday morning. When resting between assignments I live in a French Provincial chateau of Mulholland Drive. It is a fairly small place of forty-eight rooms and fifty-nine baths. I dine off gold plate and prefer to be waited on by naked dancing girls. But of course there are times when I have to grow a beard and hole up in a Main Street flophouse, and there are other times when I am, although not by request, entertained in the drunk tank in the city jail. I have friends from all walks of life. Some are highly educated and some talk like Darryl Zanuck [head of 20th Century Fox]. I have fourteen telephones on my desk, including direct lines to New York, London, Paris, rome, and Santa Rosa. My filing case opens out into a very convenient portable bar, and the bartender, who lives in the bottom drawer, is a midget named Harry Cohn [head of Columbia Pictures]. I am a heavy smoker and according to my mood I smoke tobacco, marijuana, corn silk, and dried tea leaves. I do a great deal of research, especially in the apartments of tall blondes. I get my material in various ways, but my favorite procedure (sometimes known as the Jerry Wald system), consists of going through the desks of other writers after hours (referring to other writers of Warner Brothers Studio).  I am thirty-eight years old and have been for the last twenty years. I do not regard myself as a dead shot, but I am a pretty dangerous man with a wet towel. But all in all I think my favorite weapon is a twenty dollar bill. In my spare time I collect elephants.

A later correspondence between Chandler and Carter, this time on the subject of the Bible.