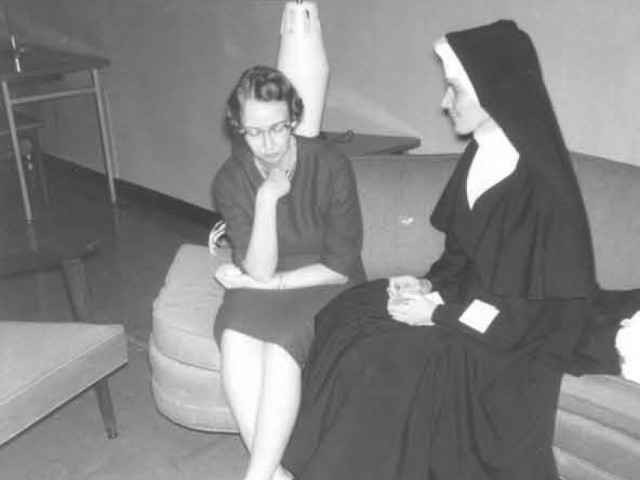 From 1955 until her death nine years later, Flannery O’Connor maintained a frank, wide-ranging and candid correspondence with Betty Hester, a clerk at an Atlanta-based credit union who had one day written O’Connor out of the blue. “I would like to know who this is,” O’Connor had responded, “who understands my stories.”

I looked in my Webster’s and see it is 1948, so you are five years ahead of me in your vocabulary and I’ll have to concede you the word. But I can’t concede that I’m a fascist. The thought is probably more repugnant to me than you, as I see it as an offense against the body of Christ. I am wondering why you convict me of believing in the use of force? It must be because you connect the Church with a belief in the use of force; but the Church is a mystical body which cannot, does not, believe in the use of force (in the sense of forcing conscience, denying the rights of conscience, etc.). I know all her hair-raising history, of course, but principle must be separated from policy. Policy and politics generally go contrary to principle. I in principle do not believe in the use of force, but I might well find myself using it, in which case I would have to convict myself of sin. I believe and the Church teaches that God is as present in the idiot boy as in the genius.

Of course I do not connect the Church exclusively with the Patriarchal Ideal. The death of such would be the death of the Church, which is only now a seed and a Divine one. The things that you think she will be added to, will be added to her. In the end we visualize the same thing but I see it as happening through Christ and His Church.

But I can never agree with you that the Incarnation, or any truth, has to satisfy emotionally to be right (and I would not agree that for the natural man the Incarnation does not satisfy emotionally). It does not satisfy emotionally for the person brought up under many forms of false intellectual discipline such as 19th-century mechanism, for instance. Leaving the Incarnation aside, the very notion of God’s existence is not emotionally satisfactory anymore for great numbers of people, which does not mean that God ceases to exist. M. Sartre finds God emotionally unsatisfactory in the extreme, as do most of my friends of less stature than he. The truth does not change according to our ability to stomach it emotionally. A higher paradox confounds emotion as well as reason and there are long periods in the lives of all of us, and of the saints, when the truth as revealed by faith is hideous, emotionally disturbing, downright repulsive. Witness the dark night of the soul in individual saints. Right now the whole world seems to be going through a dark night of the soul.

There is a question whether faith can or is supposed to be emotionally satisfying. I must say that the thought of everyone lolling about in an emotionally satisfying faith is repugnant to me. I believe that we are ultimately directed Godward but that this journey is often impeded by emotion. I don’t think you are a jellyfish. But I suspect you of being a Romantic. Which is not such an opprobrious thing as being a fascist. I do hope you will reconsider and relieve me of the burden of being a fascist. The only force I believe in is prayer, and it is a force I apply with more doggedness than attention.

To see Christ as God and man is probably no more difficult today than it has always been, even if today there seem to be more reasons to doubt. For you it may be a matter of not being able to accept what you call a suspension of the laws of the flesh and the physical, but for my part I think that when I know what the laws of the flesh and the physical really are, then I will know what God is. We know them as we see them, not as God sees them. For me it is the virgin birth, the Incarnation, the resurrection which are the true laws of the flesh and the physical. Death, decay, destruction are the suspension of these laws. I am always astonished at the emphasis the Church puts on the body. It is not the soul she says that will rise but the body, glorified. I have always thought that purity was the most mysterious of the virtues, but it occurs to me that it would never have entered the human
consciousness to conceive of purity if we were not to look forward to a resurrection of the body, which will be flesh and spirit united in peace, in the way they were in Christ. The resurrection of Christ seems the high point in the law of nature…

You are right about “A Stroke of Good Fortune.” In fact I didn’t want it in the collection but was prevailed upon by my editor. It is much too farcical to support anything. Actually it was intended as a part of Wise Blood but I had the good sense to take it out of there. I suppose “The Artificial Nigger” is my favorite. I have often had the experience of finding myself not as adequate to the situation as I thought I would be, but there turned out to be a great deal more to that story than just that. And there is nothing that screams out the tragedy of the South like what my uncle calls “nigger statuary.” And then there’s Peter’s denial. They all got together in that one.

You are also right about this negativity being in large degree personal. My disposition is a combination of Nelson’s and Hulga’s. Or perhaps I only flatter myself.

For more on the fascinating, and ultimately tragic, life of Betty Hester, click here.