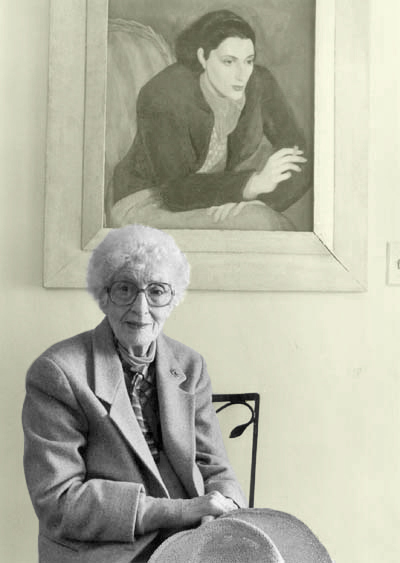 Julian Huxley, brother to Aldous, married Juliette Baillot in 1919. He was unfaithful, and eventually told Baillot that he wanted an open marriage in which both of them would take lovers. Baillot was from a conservative Swiss family, and was crushed both by Huxley’s lack of love for her and by the impropriety of the situation. One of Julian’s many affairs was with the American writer May Sarton, who, after meeting Huxley’s wife, became infatuated with her. They began a passionate correspondence. Perhaps too passionate: around the end of 1948—a few months after the letter below—Baillot became embarrassed by Sarton’s letters, and the two stopped writing. After a decade-long silence, Sarton wrote to Baillot when Huxley died in 1975, in order to express her condolences. She responded, and the two kept in touch until Baillot’s death in 1994.

Petite flamme bleue, et je t’ai nommé il y a bien longtemps sans savoir! [My little blue flame, and I named you that a very long time ago, before I knew!] Just back from an adorable day with the family in Bruges—where I did not stay the night because I thought there must be a letter from you and, thank God, there was! I can’t type because everyone is asleep and fear you will not be able to read a word. How awful that Anthony the archangel, will have another little burden tied to his feet, but perhaps it will be a marvelous boy to astonish the world and I think he would like to have a son. I love to think of you all day with the babes whom you can kiss and enjoy and adore with all the privilege of being a grandmother, though of course it is quite impossible for me to imagine it—a grandmother all fire and so terribly wonderfully young. But then the only people who are interesting in this sad world are the people who keep their innocence (so much deeper than any other sort of wisdom). On the train I read the Maitre de Santiago—rather grand, in a way, except that the end seems unconvincing. In the preface he said this (which I carried around with me all day, waiting to lay it in your hands):

Now words have so little meaning—and so much. I walk round and round them, searching for the exact truth. All the horizons are pushed very far out for me. Je souffre tant d’espace, cette perspective infinie où tu es toujours au bout, tant désirée. [I suffer from this vast space, this infinite perspective where you are always there at the end, and so greatly longed for.] Darling, I have to come to Paris May 24th, willy-nilly, to hear Daddy speak at the Collège de France on the 26th. Will it be all right? If Julian is there all will be well and I’ll stay 2 weeks if you can bear it and see him when he comes back. If, for any reason, you would rather not, I can go to the Mayers. Let me know. But I hope, I hope—though I shall never expect anything, you know.

Bruges was such fun. We sat for a long time in the sun drinking coffee outside after lunch, tasting each other’s smiles. Mother (who looks frightfully tired) said she felt like a butterfly opening and shutting its wings very softly on a flower. Then we saw the Memlings (how vividly it brought back to me the day when you and I saw them together in Paris!) and then took a slow put-putting boat and wandered lazily among the canals. We saw two swans gravely doing their courting dance, their long necks just not touching. How I thought of many things, source-qui-donne-soif [spring which makes one thirst].

Balthus, the painter-uncle of Maria Huxley was here yesterday when I got back very tired from a long afternoon with Jean Do and called today to say he must make a drawing of me. I dread the time but perhaps it will be good and I can give you a photograph of it. His second wife is a poet.

I wrote Kot, also very circumspectly, and told him the last 3 days were close to peace. I’m glad my cramps served a purpose! But of course, darling, he knows everything in essence, if not in fact. Only we know the facts, or should know them, so that is all right.

I think very much about the delicacy of your face, when it suddenly becomes transparent. Whenever I shut my eyes you are there, so now I’ll shut them.

But where to send this? You don’t say when you leave for Paris! I have an awful cough, but am otherwise all right—cramps all gone.

Listen to Sarton’s poem “A Glass of Water” featured in the Writer’s Almanac.

Enjoy an interview with Sarton in her home where she discusses feminism and reads some of her own work.