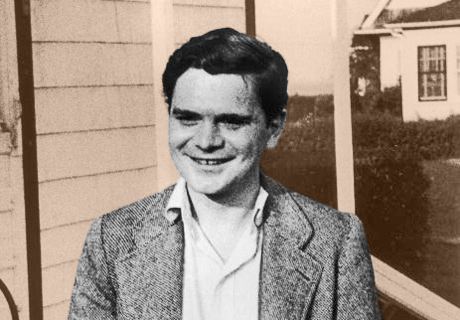 Here, James Schuyler writes to poet and author Ron Padgett, a fellow member of the New York School. He recounts a recent visit to East Aurora, NY, reflects on soap operas, and lauds the spring flowers in bloom.

You think you and Patty and Wayne have had colds. Well. Let me tell you about mine.

It seems like about a million years since I last wrote to you, but that’s because I’ve been to East Aurora; and back. I hardly know what not to tell you about first—that my sister-in-law was elected Most Worthy Matron of the local Eastern Star? Or maybe it was more Brainard than that: Most Really Worthy Matron of the Eastern Star. Or the hypnotic and brain mangling sessions with the TV set. I got hooked, totally, on the daytimes serials, channel 4 from 2 to 4. I especially enjoyed one (“Guiding Light,” maybe?) in which Rachel, who never appeared, had capped a lifetime of double dealing by renting an apartment, which her husband had never seen, for $325 a month—and got one month’s security and the first month’s rent out of—hang on—the baby’s trust fund! This news was broken to about thirty different people in five days, and the art of staggering speechlessness, as though struck by an unseen force, scaled new depths. Joe says he likes daytime serials because the actors are so good and the stories so strangely true to life. Uhm. Maybe the attraction is that they are what one fears life may be like—a lot of decorous people sitting around Tvless living rooms telling lies on demand. “Did you see Helen today?” Commence sneaky music. “Why—why—” close up of quivering wrinkle “No!” Asthma attack begins as Wurlitzer explodes into fragments through which we see a woman buy a beauty shop so she can give herself a decent home permanent—“I like lots of body—not much curl.” Where is my Build-a-Bomb kit.

As for the folks. They seemed well.

At that point Bruno came to tell me it was 70 degrees—in the shade—and why not go for a wallow in the swamp? So we did. Skunk cabbage shoots rioting out of the muck like students. Also a lot of students lying around like limp skunk cabbage leaves. It’s a nice little nature preserve but somehow measly. Just when you think you’re getting into it you realize that flick of blue is a Corvair bound for nearby Belchertown (Massachusetts) and no jay. Civilization is all right, but I prefer to be one of its discontents. Except that’s getting to be a bit modish, isn’t it.

I hear you have conquered New Jersey and plan to use it as a launching pad when you storm England. Or that was the word at Kenward’s smoke-in (or booze-up—dealer’s choice) after Joe [Brainard] and Anne’s [Waldman] reading. It was a nice party notable for the absence of anyone named Padgett, Mitchell, [George and Katie] Schneeman or [Tom] Veitch. I liked Tom’s poems in World 18, especially to “hello Nose” one.

The little flowers by the rhodendron are species crocuses, they’re much nicer than the big kinds I think. Although this time of year anything that will bloom is jake with me—yesterday I found a stray Siberian squill doing its dark blue thing, but they have gone the way of garden plants by now. How, by the way, is your earliest (last fall) planted crop doing, and what did you do with it when the in-laws came to visit?

Speaking of coming to visit—why I’d love to. But not before May. I absolutely can’t think about travel at the moment—the trip back from Rochester in the Easter blizzard was even worse than the trip to Buffalo in a cloudburst. At least the cloudburst trip only took eleven hours.

Fairfield and Anne were in town—oops, NYC—over the past weekend—Fairfield’s show is up at Tibor’s, and I hope you’ll get to see it. There is a biggish picture of the living room in Maine which I rate tops.

Lessee. I thought I had something real to tell you. No. Guess not. Nothing real has happened to me.

Proust gets better and better—have you crashed yet?

Love to Patty and Wayne,

All this week, all day, every day, stay well and keep happy…