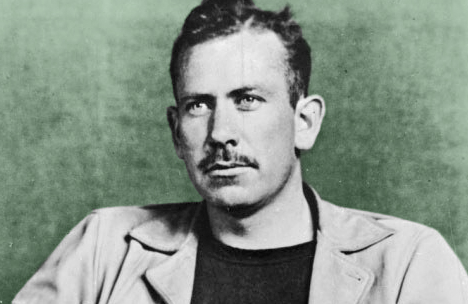 John Steinbeck, caring for his aging father and awaiting the publication of his second novel, To the Unknown God, writes wistfully to his former classmate and roommate Carl Wilhelmson on the pleasure of work and his taste for the metaphysical.

This loss of contact has been curious. I hope that now it is over. Enclosed is a letter I wrote to you a long time ago and never had your address to send it.

This condition goes on, one of slow disintegration. It will not last a great time more, I think. For a long time I could not work, but now I have developed calluses and have gone back to work. It seems heartless when I think of it all. You are much more complex than I am. I work because I know it gives me pleasure to work. It is a simple as that and I don’t require any other reasons. I am losing a sense of self to a marked degree and that is a pleasant thing. A couple of years ago I realized that I was not the material of which great artists are made and that I was rather glad I wasn’t. And since then I have been happier simply to do the work and to take the reward at the end of every day that is given for a day of honest work. I grow less complicated all the time and that is a joy to me. The forces that used to tug in various directions have all started to pull in one. I have a book to write. I think about it for a while and then I write it. There is nothing more. When it is done I have little interest in it. By the time one comes out I am usually tied up in another.

I don’t think you will like my late work. It leaves realism farther and farther behind. I never had much ability for nor faith nor belief in realism. It is just a form of fantasy as nearly as I could figure. Boileau was a wiser man that Mencken. The festered characters of Faulkner are not very interesting to me unless their festers are heroic. This may be silly but it is what I am. There are streams in man more profound and dark and strong than the libido of Freud. Jung’s libido is closer but still inadequate. I take pleasure in my structures but I don’t think them very important except in the doing.

Tillie died you know and now we have another dog named Joddi. An Irish terrier and beauty. We like him. He is one of the toughest dogs I have ever seen although only a little over six months old.

Your preoccupation with old age would be shocked out of you by seeing what I see every half hour all day, true age, true decay that is age. A human body that was all dead except for a tiny flickering light that comes on and then seems to go out and then flickers on again. Our life has been uprooted of course, but that doesn’t matter if I can find my escape in work.

I have a book coming out in a couple of months. I don’t think I would read it if I were you. It might shock you to see the direction I have taken. Always prone to the metaphysical I have headed more and more in that direction.

I have to go to the office now and write a few figures in a ledger. Then I will come home and to my afternoon’s work. I’ll write again in a little while. And let me hear from you again old man.

From Steinbeck: A Life in Letters. Edited by Elaine Steinbeck and Robert Wallsten. New York: Viking, 1975.

Read a selection of John Steinbeck’s comments on writing, compiled  here by the Paris Review.

Listen to an NPR broadcast about Steinbeck’s last published writing—his reports from the front lines of the Vietnam war—here.