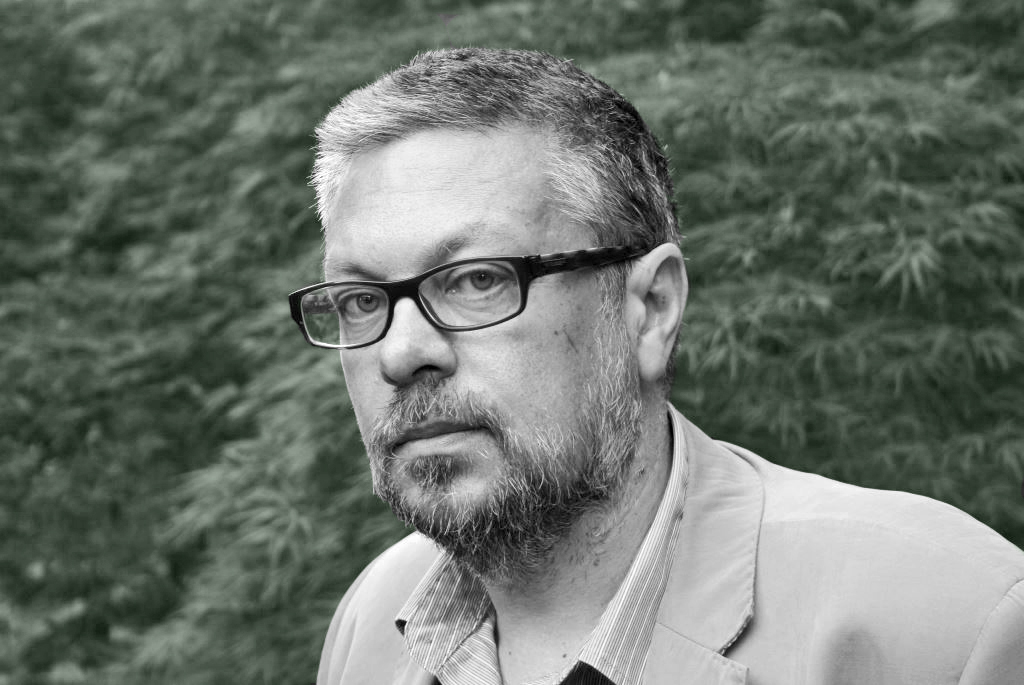 Mikhail Shishkin is one of the most prominent writers in contemporary Russian literature, and the only writer to have received all three of Russia’s most prestigious literary awards: the Russian Booker Prize (2000), the National Bestseller Prize (2006), and the Big Book Prize (2006, 2011).

His novels—all of which have been adapted for stage production in Russia—have been translated into 28 languages, with his English-language debut Maidenhair reaching U.S. audiences late last year.

A country where power has been seized by a corrupt, criminal regime, where
the state is a pyramid of thieves, where elections have become farce, where
courts serve the authorities, not the law, where there are political prisoners,
where state television has become a prostitute, where packs of impostors pass
insane laws that are returning everyone to the Middle Ages—such a country
cannot be my Russia. I cannot and do not want to participate in an official
Russian delegation representing that Russia.

During his recent visit to New York for PEN’s World Voices Festival, Shishkin spoke with The American Reader about the political responsibilities of intellectuals, Russian literature and politics in the Internet age, and the writer’s task to “resurrect” language.
—Alyssa Loh

American Reader: You’re participating in a panel later this week on how criticism varies across several countries. How would you describe literary criticism in Russia—is it a service industry, a separate intellectual form? What is its ideal function?

Mikhail Shishkin: In Russia, literary criticism is very different than it is elsewhere. Generally, literary criticism is to tell the reader whether to buy the book or not—that’s the idea everywhere but in Russia. In Russia, you don’t have to buy the book, because all books are free on the Internet, before they are published. All my novels are free on the Internet—I do it myself, because otherwise it will be pirated. This way I can determine the definitive text.

In this way, literary criticism in Russia plays a different role. We have a civil war. On one side are the nationalists, who think Russia is a holy country, an island surrounded by an ocean of enemies (first among them, America) who want to destroy Russia. These “patriots” have their own newspapers and literary magazines and their own literary critics. On the other side, we have the liberal Russian critics. They believe that we belong with the whole of civilization, that we must be together with the Western world.

For any book published in Russia, you will know before it is published which critic will say “this is a wonderful book” and which critic will say “this is a very bad book.”  All my novels were sharply criticized by the nationalist literary critics, because they think I’m some sort of “foreign agent.”  For example, one major right wing literary magazine said, “What moral right has a writer to write about Russia if he lives in Switzerland?” So they’re just outdated. They forget that many classic Russian writers lived outside Russia and wrote their most “Russian” novels abroad, for example, Dead Souls by Gogol. And the other faction of critics, they appreciated my novels, despite where I live. So, you see, it’s a civil war, with these barricades. I don’t think this is the right way for literary criticism to exist.

AR: In an essay recently you said that, in your novels, you seek to combine the technical achievements of western writing with the humanity of the Russian pen. Could you expand on that statement?

In Russia, before the revolution, after the revolution, the most popular writers were forbidden—it was impossible to buy or sell these books. But these were the most popular writings, so the ideal of writing was not to entertain, was not to sell. The idea of writing was to ask some questions that were very important for the writer himself, with the understanding that his book might never reach a reader.

But all these questions are very important for everyone: How to live a humiliating situation under the dictatorship, but still preserve human dignity? And this is the question of questions. Russian literature of every generation has to answer it. Every writer has to answer this question, and we are a very strange country. Every generation needs its war and needs its dictatorship.

I was born in the slave country of the communists, and then at the end of 80’s we got this freedom, but we just got it from the sky, almost without really fighting for it. And so we got the possibility to build our own House, the way we wanted to build it. We were absolutely free. And we rebuilt the same barracks, we rebuilt the new dictatorship, we rebuilt the same regime that we used to live in and now we have another regime, and the question is the same: How to preserve our human dignity, if everything is humiliating? Now we have got new impostors in the Kremlin. I think this is a criminal regime. The president, the parliament, they are just impostors. What to do? This is the question.

AR: And that’s why you pulled out of the BookExpo America Fair earlier this year—you didn’t want to represent a regime that you saw as corrupt and criminal. Nowadays, in Russia, how would you characterize the political responsibilities of writers?

MS: You see, we have a very special kind of regime now. During the last regime—the communist regime—they depended on the slaves. They needed the slaves. That is why the borders were closed. There was almost no chance to escape. And now, we have the regime of the 21st century. The borders are free! Everyone who doesn’t like the regime is free to go, because the regime doesn’t need these people at all. These bandits with state power just need these gas and oil pipelines. They sell what belongs to the people, and then they don’t share this money with their own population. They invest or they spend all this money abroad in the West. The regime doesn’t need the population at all, and we have a very special situation because all the people who are against the regime have the possibility to speak freely on the Internet. We have now the “Internet ghetto,” like in the Middle Ages. In the ghetto Jews could worship freely their God, but not in the town. The same is now true for Russia: on the Internet people can express what they think absolutely freely, but most of the population don’t have access to Internet. The only information source for millions and millions—the majority of the population—is just state television. And through state television, they control and manipulate people. I think the responsibility of the writer is the same: just to speak, not to keep silent.

AR: You wrote a letter explaining your refusal be part of the official Russian delegation at BEA 2013. Did this sense of responsibility play a role in your decision to publish that letter online?

MS: No, I actually didn’t put it online myself, but in Russia my letter was online everywhere—it was so highly discussed. I was happy that I had started this discussion, on how to behave yourself if you’re an intellectual and have to deal with the regime. A lot of people who were highly praised—famous actors, theater directors, musical directors…they just licked the ass of Putin, and it was very depressing and humiliating, because they’re afraid of him. They know that this gray mouse will take revenge and will just close the state money for the theater, and so on.

I actually have no fear. You see, their power is our fear.  And if you don’t fear, then they have no power.

AR: In interviews, in essays, you encourage writers to write, as you say, ‘incorrectly,’ to find words that feel fresh, to avoid familiar sounds, and to diverge from the normal use of language as much as possible. As your works are translated into new languages, and brought to US and UK readers, have you found excessive difficulties translating your work?

Every translation is a fight with words. And I’m fighting against my own Russian language, too, I hate it, it’s my enemy, because it’s impossible to say anything in it. All words are—I’m afraid, as in any language—dead. I will never forget how I wanted to make my first declaration of love to a girl. I was 16. I came up to her and I opened my mouth and was petrified because it was impossible to express in words what I was feeling, because all the words were dead. The writer must resurrect words—give them new life—to speak about important things, to have the possibility of making a declaration of love to a girl, to the language, to the world.

The full text of Mikhail Shishkin’s open letter to the Federal Agency for the Press and Mass Communications and the International Office of the Boris Yeltsin Presidential Center can be downloaded here.