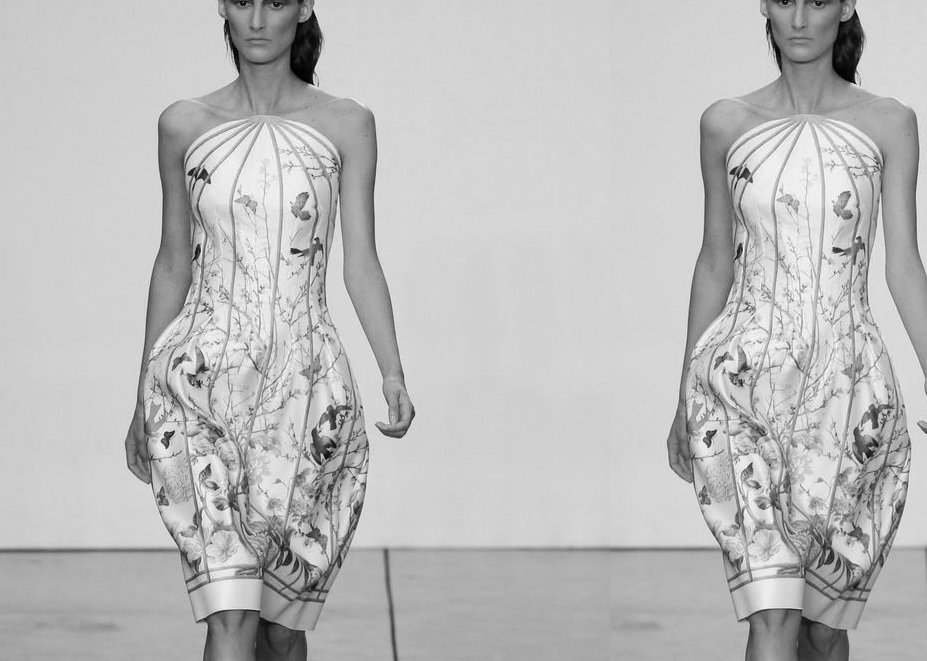 Over the weekend, Thakoon Panichgul presented his spring/summer 2013 collection. The first look was a romantic birdcage printed duchess dress, and the last, a long plisse lace dress covered in fabric caging. In its traditional formulation, the metaphor of the bird cage is pretty banal: we can see out and they can see in—but we’re trapped. What’s interesting is that there’s more. Montaigne once said, “Marriage happens as with cages; one sees the birds outside desperate to get in, and those inside equally desperate to get out.”

If bird cages are to be a trend it will be fitting: these objects manifest the very nature of a cultural fixation. It’s safe to be a part of it, desirable even, because there are people who also want in, and who, by this wanting, validate that “inside” position. And yet being inside requires one to give up what was free, wild and singular in her former life.

It’s easy to forget the third party in the bird cage transaction: the birds that want to get in. In Breakfast at Tiffany’s, Holly Golightly gifts a coveted antique bird cage to the narrator, only to stipulate that he mustn’t keep anything alive inside it. If, as some claim, Golightly was based on Maeve Brennan, I don’t imagine she’d be so quick to lament the animals at the zoo. After all, the problem is not simply that she’s wild, but that there are others existing in the very same world as she who would be so happily caged in. Deep inside, does Golightly worry that she’s lost something in bucking domesticity? Certainly there are tigers and pandas who learn to be kept—creatures who forget what it was to be, and enjoy being, wild.

In another of Montaigne’s works, an essay in which he employs Raimond de Sebonde’s arguments against the mutual exclusivity of reason and belief, Montaigne writes of the symbiotic relationship between the wren and the crocodile. Imagine the reptile’s teeth to be the limits of a cage in which the wren may forage for food after the crocodile has eaten. The wren would also serve the crocodile by waking him at a predator’s approach, protecting him from attack. She may want to fly away into the world outside, but to do so would be to risk starvation and to leave the crocodile without the protection of his little friend. It’s a system of nature that provides limits and logic.