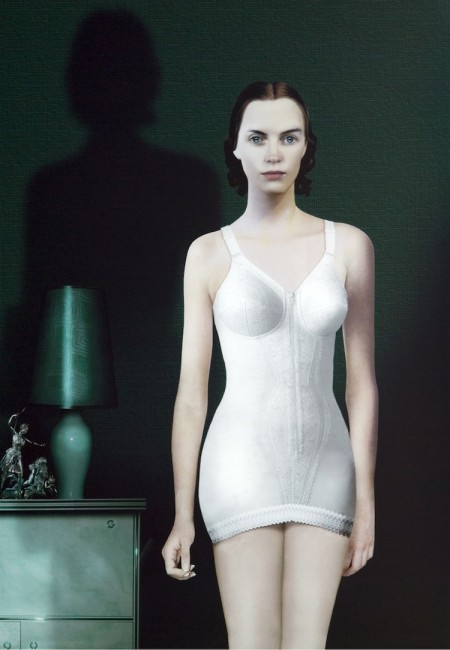 This poem has been drawn from Vol. 1 No. 5/6 of the American Reader.

3/2011
This seven-year-old yells well I’m gonna kill you at her friend
after a cold hosing
in warm weather. I can’t stay­­
in this apartment any more the domestic partner
has left and taken the mustard
and salt and other items you
only realize are missing when you go
to put them in food you wouldn’t
have cooked if you
had known. You never
know. Things
get away from you as you snatch, lift, push and press
as at the gym where you’re
the only woman and pretend
not to be looking when a man
fails to lift his weight, the barbell crashing
to the floor equipped to bounce it.
Vertigo: like the room you are in
is actually a ladle
the bowl of which
just tipped. I get it
whenever I turn my head to the left
while leaning over, or when my inner ear
is inflamed by something—a cold—the end of a cold—the manifestation
of a cold that doesn’t otherwise occur—or just, you know, stress.
Consider Hopkins and stress, all the strain
of turning Jesuit and then those hard irregular beats. You shuck and I’ll
gather, said I, when I was 9, given a ShopRite bag of corn
from a farmstand, for which a farmhand
stole hundreds of ShopRite bags it’d seem. Now the grocery carts
stop working if you wheel them over the invisible border
at parking lot’s end. Invisible fencing
for food-collecting humans. It must feel good
to have someone worrying over you—I mean
wouldn’t it? I like to imagine this person I went on a date with
worrying because I haven’t written him back. It’s one of
my best outlets at the moment. Don’t get it
twisted, I say to him, imaginarily, in this outdated slang
that makes me feel I have a companion
in my head, one I feel
superior to. Don’t get it twisted because I am not available
right now. I have a broken heart,
chief symptom of which
is a sense of neverendingness.
Why can’t a human express pain
without saying it feels like I’ll
never trust another person again, or it’s like
I’ll never feel such love again, I’ll never
live with someone so good-looking. He was really
good-looking don’t you think?
Domestic partnering with someone
easy on the eyes,
someone whose looks
satisfy you, look to you
like the golden mean,
their proportions suiting you
and never irritating you—
the way your looks irritate someone
which you can figure out when they
make unflattering references
to this part of you they also say
is cute. Like one of my people
thought I was short
and my skull
too indented at the temples
whereas this one, well with
this one the main thing I admired
was the regal shape of his head
which seemed like something to worship
if it’s all right
to worship a shape.
All that beauty of others,
it changes doesn’t it?
Consequently I’m going to get face lasers
when I get the money
these lasers they aim at your face
and make you beautiful
in six or eight sessions
spaced apart enough
to forget you look exactly the same.
In this river is a time of change
shape-shifting
ankle-touching.
Discomfort they say
well I say
is good for your art
because when you are hurt you will try
to repair yourself
with plastic means
architecting the poem
into a structure to hang
your heart on, well that’s disgusting
how about a structure
to hang new feelings on,
feelings of danger
and reconsideration?
In reality this guy
I think he did Reiki on me
because he got to my grief
lifted it a little
up and sideways and I felt
like Atlas if he got to shift
the weight of the world a little
though why it feels good
to shift a burden I can’t say
for before long it shifts
to a newly distressing position.
It’s like waiting for the train
at night, you get tired of standing
and of leaning
so you try a crouch.
With my new exercise training I hope
to get better at the crouch.

4/2011
A box of unopened
herb storage pods
is there each morning to greet me. Why is it
extreme feelings
can only be conveyed
by insisting on their permanence (I return, you will note,
to this idea, with something like a hope
for permanent ideas): I will never
love again, I’ll never
live with someone again, things that may
or may not be true. Some are true, like I’ll
never again have access to this elaborate
water filtration system, nor taste of its
cool clean waters. I can buy one
one day
maybe, if I care to, but it’s more
the care another took
that feels like
care was for me. You can live, you know,
without being cared for
or cared about at all. It’s not
a functional requirement, just
an interest, something that takes
the edge off, though you pay it back
in other, sharper edges.

5/2011
At eleven last night two cops
idling in a car at Venice beach came
over the megaphone telling everyone
the area was closed and to
go home, repeating it like the voice
on the automatic train at the airport
warning you about your baggage
and people threw bottles at the car
and kicked the tires and the cop
kept talking saying the area is closed
and it’s past curfew and the area is closed.
It’s not true
about the area, I mean
I’m here
just I’m inside
a studio apartment
like it’s not true the guy got anything twisted
though it’s true impressions can change
the further they get
from conceptions.
Welcome to this, my “A Month By the Sea,” a title
I say over and over, no it’s not
a title it’s a thing, a month by the sea,
that I have always wanted, and now look,
I have it. I should use
an exclamation point there: I have it!
And look, I’m falling in love a little
OK a lot
with the guy from that date, would you
believe it? Now I’m not one
to do that kind of thing,
I am recently
heartbroken as you’ll
recall but he sent me, among other touches, a link
to a YouTube of “Having a Coke with You.”
So as you see it’s not my fault, this falling
in love and forgetting to walk around
heartbroke. Filip! I am trying to write
in verse to you with candor but it’s hard. As you know I
revise a lot to get rid of anything
resembling self-disclosure. Well, disclosure of the
ordinary self which implies
access to another self I clearly do not know.
Easier than candor is
affectation which I hope will stir
the reader’s self
if the reader is similarly
open to getting affected. Today I bought
an affected hat.
I wanted to look
like I belonged at the beach I also
wanted to get protection from the sun.
So if I can claim I was being practical
then I can have this thing
that joins me to other
practical people
in no
particular fashion.
Some types of info
are easier to obtain
than others
about others you
need to know very little about.
Why do I strike out things
I think will reveal too much
I mean in my other poems not
this one where I am sort of
letting it all lie.
Well I say it’s because
it’s a distraction
from the interpersonal standoff I am
aiming for, which is true, but also
I’m afraid to “stand revealed,” although
when I think about others I think
we are all revealed all the time, I mean
let’s face it there’s self-disclosure
and the author’s attitude toward self-disclosure
that are always right there disclosed.