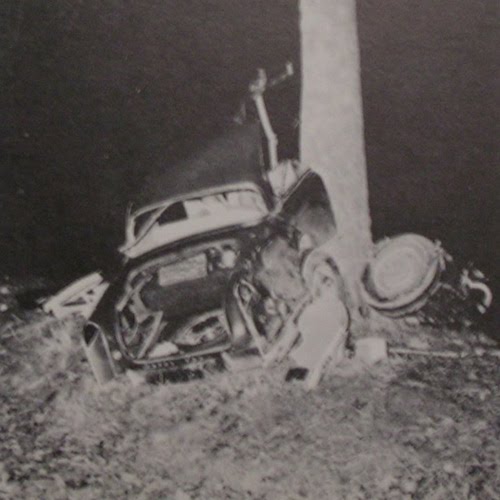 Even before I learned to drive, I always believed I would die in a car crash—a strange fear, canonized when my mother was in a bad accident. I knew it the moment it happened; no one told me. Magical thinking isn’t supposed to amount to much but, every once in awhile, a reality materializes….

She was fine in the end, but I remained fixated. My mind is a collection of misfiring fragments, and these fragments become real, pulsating matter when two, three or four observations recognize in one another affinities, conspiracies. Thus, Car Crash-SLC 1.0: a mass that glows neon mint-green in the dark, catalyzed years ago, now and again reemerging into consciousness, mutating to accommodate facts, anecdotes and miscellanea.

It happened when I visited the New Museum this week.

In one of the galleries of the “Ghosts in the Machine” exhibit, there was reference to novelist J.G. Ballard. He’s known for sifting through the artifacts of dystopia and the aftermath of technological development, a usual suspect for visual disquisition about man and machine. Within this white room, a film was playing: “Crash!”, a short created by Ballard and Harley Cokeliss in 1971, two years before Ballard would release his novel of the same name. Both explore the eroticism of car crashes. I could spend the rest of this essay discussing the sexual charge and fantasia of metal-on-metal, but my thoughts turn to other absurdities…

Heroes, anti-heroes and everymen populate Car Crash-2.0. Albert Camus died in a car crash en route to Paris from a holiday in Provence and, as the story goes, there was an unused train ticket in his pocket. His publisher, Michel Gallimard, had offered him a ride into the city, and Camus accepted. It happened in a Facel Vega, a contemporary of the Aston Martin—one of Francoise Sagan’s special possessions. That young author bought a Jaguar after receiving money for her novel Bonjour Tristesse, in which the teen narrator, Cecile, indirectly causes her nemesis to drive off a cliff. Sagan was known to race cars barefoot around St. Tropez. She would end up in a coma after a serious accident, though she did make a full recovery.

Princess Grace Kelly died in a car crash, suffering a stroke before losing control of the vehicle on Route de La Turbie along the French Riviera. She had told her chauffeur she preferred to drive herself and her daughter, Stephanie, in their Rover. Dancer Isadora Duncan was dragged to her death on the roads of Nice, strangled by her own scarf; it had caught itself in the rear wheel of the car in which she was only passenger. Her two children had drowned, trapped in an automobile, years earlier.

There was Princess Diana and the infamous accident in the Pont de l’Alma tunnel. It happened just after I moved back to the States from Paris where my father had driven maniacally, as Bostonians do, around the Arc de Triomphe and lesser roundabouts (his kind called them “silent policemen”). Jackson Pollock crashed his own car in the Hamptons, as did Helmut Newton out front the Chateau Marmont in West Hollywood. Still, I learned to drive. After all, I lived in the suburbs—how else was I supposed to meet up with boys? (Ballard was right, thrills are only intensified by fear.) My skills weren’t all that great; minor accidents resulted: hitting an unmarked police car on the way to field hockey practice, as well as multiple snow banks in college.

I stopped driving when I moved to the city, and I’m scared to start again: I walked to the New Museum that day; I have never road-tripped along the Cote d’Azur.