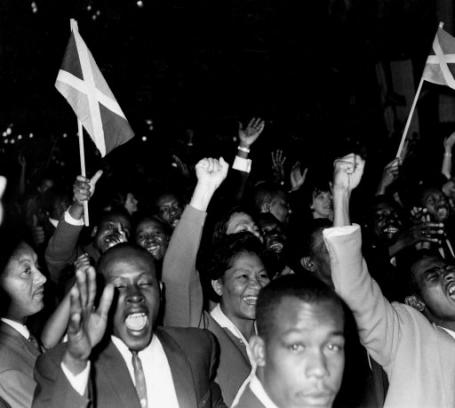 In the game of cricket, when a batsman makes a “half a century,” he raises his bat like a sceptre or a torch (indeed, like both) and slowly twirls it to the four corners of the field. This momentary stirring is a pause to catch a stronger fire before returning to the pitch. I could not shake this image from my head during Jamaica’s fiftieth anniversary of independence from Britain.

Four Jamaican-born writers—Afua Cooper, Kwame Dawes, Honor Ford-Smith, and I—gathered at the Harborfront Center in Toronto, Ontario to discuss post-independent Jamaican literature; its past, its current state, and where it is headed. The issue of exile permeated the conversation: what is the connection between a writer and his or her place of origin? Mr. Dawes and Ms. Ford-Smith remain tethered to Jamaica, and each spoke at length about their work there—Ms. Ford-Smith is a proponent of community theatre projects, Mr. Dawes runs the celebrated Calabash Literary Festival. He also recently edited the stirring anthology, Jubilation: An Anthology of Poetry Celebrating Fifty Years of Jamaican Independence. For many writers, though, living outside of Jamaica—where a thriving writing industry has yet to be concretely in place—has been a boon. Diasporic writing has created a lively network of Jamaican writers, starting with pre-independent writers like Claude McKay. It is through writing that these authors have fostered a career and a home abroad.

The conversation also focused on the relationship between language and Jamaica’s popular music. The various forms of the music (mento, ska, rocksteady, reggae, dancehall) have enriched, directly or indirectly, the expressive fabric of Jamaican literature after independence. This is most evident in dub poetry, an oral form of performance poetry that is usually accompanied by heavy drums and thick bass. Dub poetry’s emergence in the late 1970s promoted a radical, literary ethos determined to create a truly independent national voice. Mr. Dawes added that many pioneers of the genre, including Linton Kwesi Johnson (“LKJ”) and Mikey Smith, have gone beyond the voice and performance aspects of dub poetry to make their craft successful on the page as well.

Mr. Dawes also credited the music’s broad social resonance as one of the factors that moved Jamaican English, or Patois, from its character-centered position, cordoned off from the narrative in quotation marks, to the narrative vehicle carrying the characters and their story. Invoking the tutelary spirit whose language has best captured the Jamaican post-independence experience, Dawes quoted, half-singing, the opening words of Bob Marley’s “Catch a Fire”: “Every time I hear the crack of a whip…” Here, immediacy and reflection are captured in the present tense. After half a century of independence, Jamaican writers continue to voice this pairing of history with contemporary life.