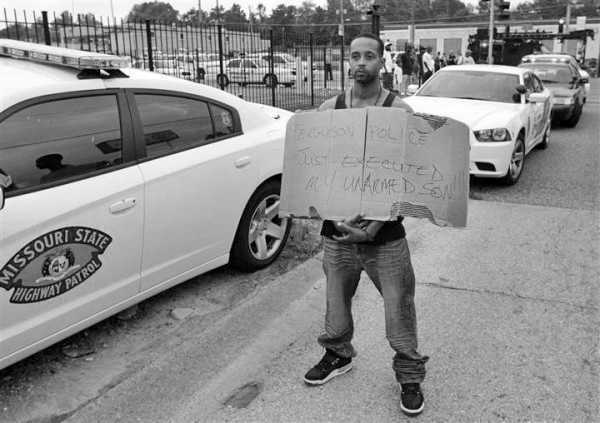 Editors’ note: This piece was originally published in the immediate aftermath of Ferguson. We revisit it now in the wake of the grand jury decision.

This essay is the first installment in a three part series. The second installment, Gaza, Ferguson, and the Perils of White Guilt, can be read here.

In the past few days, we all have learned the story of Ferguson, which is really the story of late 20th century America: a story of deindustrialization, white flight, a lost tax base, insufficient schools, and violence. Much of the economic story of Ferguson was told in an outstanding editorial by the St. Louis American, a black local paper. In the context of a whole nation in economic disaster, it’s easy to imagine how the men of the nearly all-white police force in majority-black Ferguson have their own stresses, stresses which they have expressed on their black constituents as white police forces have expressed stress on black constituents for all of American time.

Except that these white police forces have military-grade weapons and vehicles, weapons pointed at civilians. This is the other half of an economic story we are just beginning to learn. 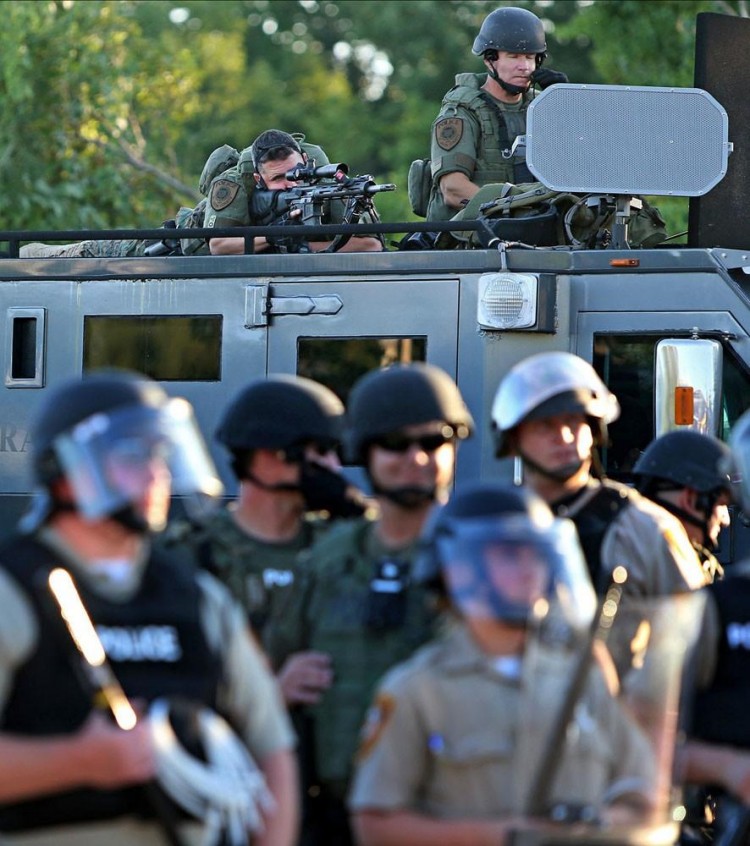 Some were surprised by Ferguson, while others insisted there was no reason to be surprised. America has long profited by the murder of people of color—overseas and at home. What is striking about Ferguson is its succinctness: the army tanks topped by snipers, the dozens of local policemen in military gear, and the rows of unarmed black men and women, some holding signs, almost all holding their hands up: waiting to be shot or arrested, yet hoping against probability to stay safe. In Ferguson we see the collapse of the urban economy and the boom of the defense industry all in a single shot. What we see, in fact, is the buoying of our economy, and the enrichment of the 1%, at the expense of human lives, lives like Michael Brown’s. This is the family portrait of late-stage American capitalism: our weapons, deployed all over the world, have no targets left but ourselves.

Of course, white America has always used violence to create wealth. This country was built by stolen labor with stolen lumber on stolen land. Periodic phases of unrest have been met with concessions and legislation meant to appear revolutionary. But disguised by this hologram of progress, the power brokers have found new ways to extract wealth from the bodies that built this country for free. Under Jim Crow, lynch law kept the labor costs down, murdered those organizing for real wages and real life, and scared others into accepting the debt and social immobility of a sharecropping system that looked a lot like things before the slaves were freed. In her famous “Lynch Law in All Its Phases,” Ida B. Wells told the story of two black friends of hers, successful business owners, being murdered by their white competitor, who then took over their grocery store.

I get so pissed when people say they can’t believe this is happening in America. Americans had pics of lynchings on greeting cards.

In this country, black and brown bodies have always been viewed as a natural resource to be extracted and monetized like oil or steel. In 1970, economist William Tabb argued that the nation’s relationship to its black ghettos was of an imperialist power to its colony, extracting wealth. In 1994, critical theorist R.A.T. Judy described this phenomenon in the words of Ice-T, if Ice-T had rapped his 1991 album O.G. Original Gangster in the language of theory. Judy extrapolates from a song called “Escape from the Killing Fields.” Judy sees William Tabb in Ice-T: a recognition of the political economy of the ghetto, which is to say, its value. “The killing fields,” Judy writes, “are the place of non-work for complete consumption of needless workers.” That is, the ghetto is where the country leaves its surplus workers to die.

According to Judy, “black folk have always been defined in relation to work.” The work is gone, but people of color are still appraised on the open market, and that logic is built into our racial slurs: A nigger was “the energy, the potential force, that the body contains…That force is the thing that the planter owns. It is the property of the planter that is the nigger. The nigger is that thing.” Black folks were defined in their value as work. But after the work disappears, what happens to the worker? It’s in the context of postindustrialization that Judy locates the nigga: “a nigga is that which emerges from the demise of human capital, what gets articulated when the field nigger loses value as labor.” That is, the nigger becomes nigga when he no longer has any work—when he becomes, economically at least, worthless.

This is the logic against which we proclaim that #BlackLivesMatter.

But matter is different than cost. Because the brilliant businessmen of America—the John Galts who make the world go round—have found value in the most neglected of Americans. In our abandoned Americans, those at the highest risk of incarceration and death-by-cop, there is value. There is value where prisoners mean prison contracts, and criminals mean fighting crime. And if fighting crime pays, then criminals are worth money—and criminalization is an economic imperative.

Even though people across the country suffer from poverty, addiction, and violence, the face of criminality is still black. User-generated media have shown how efficiently the media demonizes black victims of violence. Judy’s theory helps us see the clean economic logic behind this racism. To be proper targets for the enormous business initiative that is the War on Drugs—and the war on immigration, while we’re at it—people of color must be dehumanized, criminalized. They must be shot by the police. Judy says the role of the police, “as agents of the state, is to enforce the laws of property. In other words, the role of the police…is to turn the negro [subject] back into a nigger,” that is, a person who can be exploited for someone else’s gain. Unarmed black men continue to be murdered by white cops—at a rate of two a week, we learned today, and who knows about the border—because the great horses of our economy depend on it. The murders announce that these bodies are for sale. The murders mark them as criminal and thus available for destruction. The payoffs are enormous.

GEO, Boeing, Halliburton, Lockheed Martin—not to mention McDonalds, Monsanto, PepsiCo—these are the growth stocks that pay dividends every quarter, the companies so profitable even the Gates Foundation cannot resist them. Guns, sugar, prisons, war: the DOW Jones has worked around the death of Michael Brown. Ferguson exposes an economy where kids are commodities, whether dead or in jail.