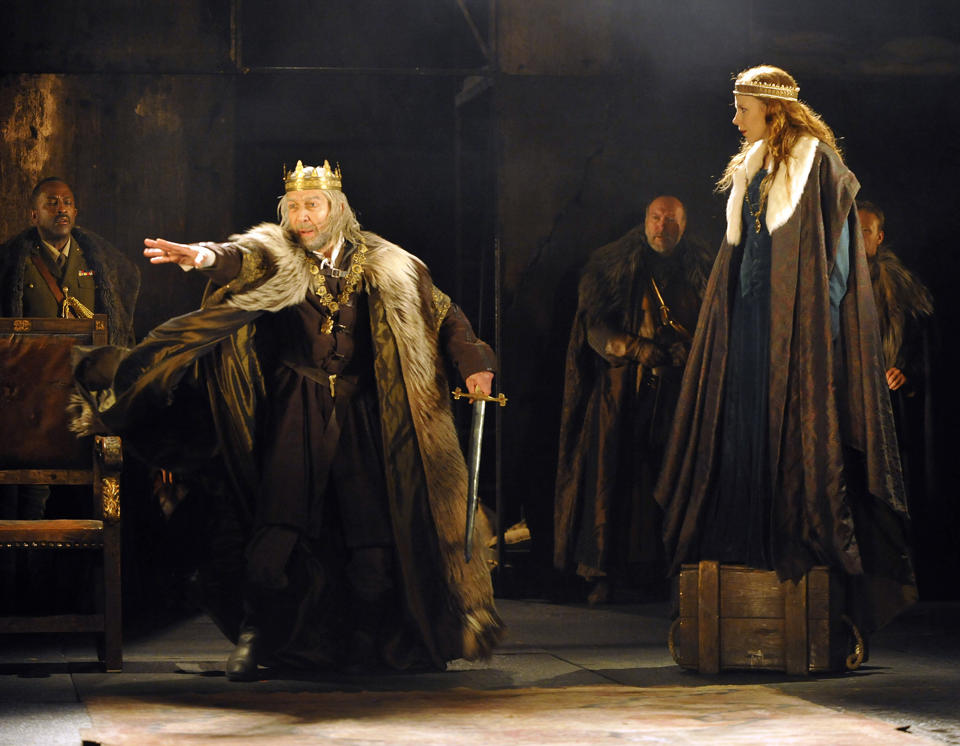 How many Shakespeare plays are we, in fact, producing? In 2010, theater director Isaac Butler did a bit of light statistical work on this exact question, and discovered that the Bard was by far the most produced playwright of the preceding decade, with 1,163 stagings of his work between 2000 and 2010.

Compare that to August Wilson, the decade’s second most-produced playwright, whose work was staged 146 times. Seventy-five percent of the “classical” (pre-20th century) plays produced that decade were written by Shakespeare. Since the end of the decade, the number of Shakespeare productions has only increased. The last three years have already seen more Broadway revivals of Shakespeare’s work than were staged in the decade prior.

Are we producing too much Shakespeare? Two Reader editors take sides.

If you care about maintaining theater’s role as a major “mainstream” art form and thus have a vested interest in ensuring audience attendance, then no, we aren’t producing too much Shakespeare. So long as Shakespeare serves as a gateway drug, so to speak, for otherwise disinterested, would-be theater-goers, I’m all for it being produced. Given the high proliferation of Shakespeare plays still being performed on Broadway and at smaller repertory theaters, it appears that Shakespeare continues to draw large audiences. Thus, as it currently stands, similar to the way in which bestselling novels enable publishers to take risks on more niche, experimental writers, I imagine Shakespeare gives theaters the financial padding necessary for producing more experimental works.

More importantly, though, in addition to serving a practical function within the ecosystem of the theater world, Shakespeare presents a unique creative opportunity for actors and makers of theater. It takes real artistry to take already well-known stories and make audiences see them anew—it actually highlights things like lighting, design, and staging in a way that other productions may obscure. And when language or plot is not novel, it puts the spotlight on the actors to access what’s timeless and believable in the emotions experienced by characters that by now have become easily recognizable archetypes.  It’s actually very easy to do Shakespeare poorly and to play into the melodrama of it all—because it is mostly melodrama. In the midst of such extravagant drama, the actors must find what’s relatable in these characters and what’s at the heart of these stories. Derek Jacobi’s performance of King Lear at BAM in 2011 was one of the most powerful theatrical experiences I’ve ever had because unlike any other production I’d seen previously, it revealed to me the deep humanity at the core of one of theater’s most epic tragic heroes. How many other characters in contemporary theater undergo such a broad range of emotions in one play? Lear’s fall from hubristic ruler to perplexed madman to humbled father weeping over the dead body of his daughter is a profound journey to witness when done well.

Because there is also a sentimental reason why we keep coming back to these plays. We humans need catharsis and I’m not sure its generated as often in contemporary theater as it is in the classics. If anything, in addition to Shakespeare, I’d love to be seeing more of our theatrical Ur-myths: more of the Greeks, more classical theater period—more plays that aren’t afraid of going over the top so that in the end we can see the human spirit stripped to its core.

When done well, Shakespeare’s plays have a nearly unparalleled allusive power—they transcend their specific plots and serve as metaphors for nearly any time and place, making us aware of the present perhaps more so than plays actually grounded in our current reality. I know of no other cultural barometer like Shakespeare by which we can continuously measure and highlight how our society has changed or remains the same and its this capacity for delighting, moving and subverting that makes us need Shakespeare.

That forty plays by one author—composed, indeed, more than four centuries in the past—should comprise so large a portion of American theatrical activity strikes me as extremely peculiar, as well as a genuine cultural hazard. Which is emphatically not to say that Shakespeare is killing our culture: rather, I believe that this preoccupation with the Bard’s work is symptomatic of a sort of collective denial of the state of contemporary culture, and constitutes a means of shielding ourselves from a very real cultural dissolution that’s already well under way.

Lest I begin to sound like an editorial note in the New Criterion, let me back up for a second. It seems fairly obvious that to allow any one author to so predominate American theater is to severely limit the opportunity for other playwrights—in particular, new, unknown or untested playwrights—to showcase their work to the public. This is true both as regards theaters (there are only so many shows in a season) and the for-profit press (try convincing your editor to devote the paper’s once-a-week theater coverage to an unknown work when Frank Langella is playing Lear).

But that this one author is Shakespeare is, I think, a whole different sort of troubling. For I believe that “Shakespeare,” in this context, has become a sort of cipher for a specific notion “masterpiece” as such, and the apotheosis of a general cultural attitude that privileges the retrieval of past (even unknown past) “classics” over the production of new ones.

This, I’d argue, is completely fucked up. I’ll try and explain why I think this is the case.

I’ve always found self-evident the fact that there are really only a handful of foundational, simple truths regarding man, society, and the connection between the two; these truths don’t change over time, and as long as there are people, and these people interact with one another and process the world through some essentially linguistic medium, the relevance of these truths—and the necessity of their communication—will remain urgent and complete.

However, while these truths don’t change, it’s clear that everything else does: society, industry, technology, political arrangements, prejudices, epistemic boundaries—everything. And as this “everything” shifts, that small, crucial aperture created by a great work, which allowed its readers to peer through the “everything else” and glimpse those few truths, is gradually occluded. Accordingly, it’s incumbent upon each successive generation to rediscover how, given the particulars of their era, these truths can once again be successfully communicated.

The great works of the past remain crucial to the present day, because they not only succeed, within the context of their historical particularities, in conveying such truths, but also because they serve as varied models for how this extremely difficult task can be accomplished. And I do think a society’s ability to connect with such works is, in a limited sense, a measure of cultural health. However, I think our particular era relies overmuch on the masterpieces of the past, and that a harried sort of desperation animates many efforts to ensure their continued endurance—as if the transfusion of past greats into the bloodstream of an ailing culture might somehow lift it from the brink of death. In reality, the exact opposite is the case: the blood, as it were, isn’t an exact match for the patient—the “everything else” is too dissimilar—and injected in excess will cause the arteries to clot. Put differently: the excess of attention to past masterpieces ultimately obfuscates our needs for new ones—ones that, for lack of a better phrase, arise fully rendered in our own historical idiom.

I’m proposing here a variation of Artaud’s argument in “No More Masterpieces.” I’d go slightly further though, and suggest that we have not only the right to re-render such truths in our own historical “voice,” but also the responsibility to do so. Because I think it’s possible to lose—not absolutely, but at least for a few generations—every hint of any aperture effectuated in the past, and thus our access to truths so revealed.

Which is all to say that, today, we’re very much in danger of losing that aperture altogether. At which point even the old classics suffer: they’re subjected to our own myriad distortions as, simultaneously, we grow increasingly incapable of learning from them the work of making art. Isn’t this what’s happening already with the Bard? Shakespeare took nearly all of his plots from other works, from events of the dormant past, and vitalized them with new breath. If we can learn anything from the ubiquity of his work right now, let it at least be the incisive importance of that very act.