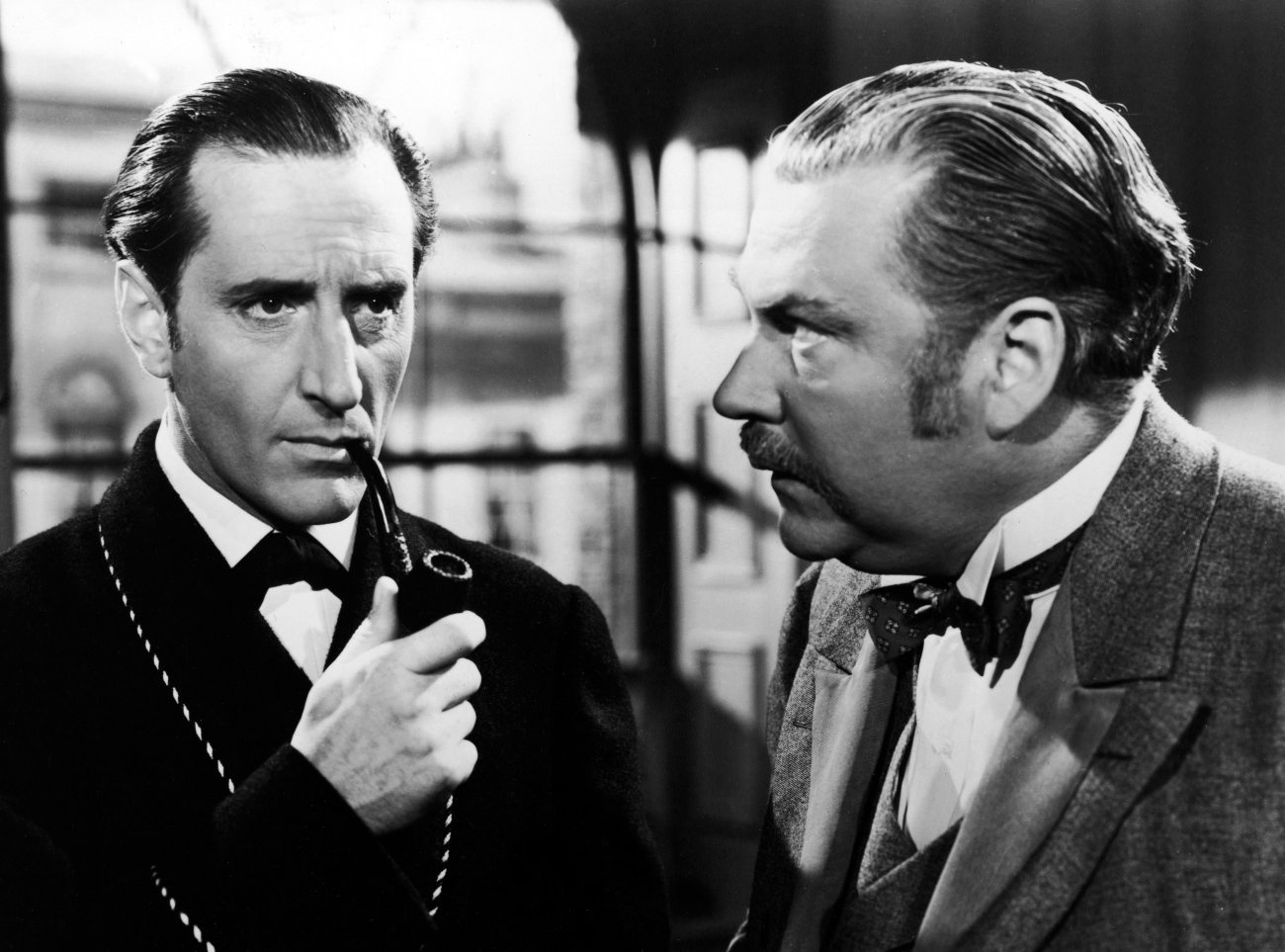 “Fanfiction” is flexibly defined as amateur fiction created by fans in response to, and borrowing from, popular media works or series. Two recent events have thrust it into the spotlight: the phenomenal success of E.L. James’ racy romance series Fifty Shades of Grey (which started as fanfiction), and China Miéville’s call for the de-commercialization of writing at the Edinburgh World Writer’s Conference. However, fanfiction not only has a lengthy history but, in its challenge to current modes of literary production, hearkens back to earlier notions of originality and authorship.

Sherlock Holmes fanfiction serves as a benchmark for the potential of the genre. Sir Arthur Conan Doyle’s four novels and 56 short stories featuring the detective Holmes and his companion-biographer Dr. John Watson were published between 1887 and 1927. They have provoked fervent participatory behavior in fans since their publication. The unusually playful works operate under the conceit that Holmes and Watson were historical figures, and Doyle merely their literary agent. Doyle’s stories inspired fanfiction spinoffs as early as 1893, by no less distinguished a fan than Doyle’s friend and the creator of Peter Pan, J.M. Barrie, who wrote the SH pastiche “The Adventure of the Two Collaborators” as a present for Doyle. In response to William Gillette’s 1899 stage adaptation of SH, Doyle simply said, “You may marry him or murder him or do whatever you like with him.” Monsignor Roland Knox continued the tradition in the influential paper “Studies in the Literature of Sherlock Holmes” (1911), in which he entreats fellow Sherlockians to uncover the hidden truths of the world Doyle created. Doyle, in correspondence, gave his blessing to this undertaking, suggesting that those fan-critics had as much right to define Holmes’ fictional universe as he did. For Doyle, being the author was not synonymous with being an authority.

To this day, Doyle’s stories remain enmeshed in a web of copyright issues and authenticity claims. When some of the SH stories were claimed as public domain in the 1970s, a spate of new interpretations began to appear, such as Nicholas Meyer’s  novel, The Seven-Per-Cent Solution (1974). Mr. Meyer presents the text as a lost manuscript written by an elderly Watson and discovered by his own (Mr. Meyer’s) uncle. Layers of authenticating evidence preface the manuscript, and mock-scholarly footnotes added to the appearance of legitimacy. The narrative is a rewriting of one of Holmes’ most famous adventures, “The Final Problem,” in which Holmes meets with arch-enemy Professor Moriarty and defeats him at the cost of his own life (he was resurrected 20 years later by Doyle after dismayed fan outcry). Mr. Meyer offers a behind-the-scenes retelling of the incident, focusing on Holmes’ cocaine addiction, altering the role of Moriarty, and introducing Sigmund Freud as an integral character. Moriarty is portrayed as Holmes’ nemesis only when the detective is under the influence of drugs. The reader is left to resolve the disparity between Moriarty as canonical evil mastermind and, in this incarnation, as a figment of Holmes’ delirium. When considered against Doyle’s narrative, the reader is confronted with two conflicting Moriartys that must be simultaneously navigated, and the evidence in the canon that Moriarty is a villain heavily colors expectations of The Seven-Per-Cent Solution.

While Mr. Meyer’s novel has merit as a standalone work of historical detective fiction, the story is richest when read in light of its predecessor. The necessity of reading two parallel texts is a common feature of Adaptation Studies, which lends itself to the examination of the linear and reciprocal relationships between texts. Deleuze claims in Difference and Repetition, that commentaries have “a double existence and a corresponding ideal: the pure repetition of the former text and the present text in one another”. Here, the definition of a “commentary” can be extended to cover any text that explicitly or tacitly responds to another text. It brings to mind, as Barthes puts it in “The Death of the Author,” the inherent quotational and non-originary nature of all texts. He describes the text as “a multi-dimensional space in which a variety of writings, none of them original, blend and clash. The text is a tissue of quotations drawn from the innumerate centres of culture”. Mr. Meyer, at once fictionalizing and authenticating his narrative by using historically verifiable material, disguises the distinction between fiction and reality, source and representation. The notion of an original (conjured by the mind of Doyle) is corrupted and Mr. Meyer’s novel stakes a claim to be as authentic, in its relation to history, as Doyle’s text.

Mr. Meyer’s work is just one of many such challenges to the authority of Doyle’s stories. Sherlock Holmes vs. Dracula; or, The Adventures of the Sanguinary Count by Loren D. Estleman introduces Holmes to the undead. The Final Solution by Michael Chabon features an unnamed, Holmes-like detective, long-retired, who stumbles upon a mysterious Jewish refugee from Nazi Germany. Larry Townsend’s 1971 novel The Sexual Adventures of Sherlock Holmes retells some of the classic mysteries and throws in a gay pornographic subplot. Mr. Townsend’s campy romp through Doyle’s detective stories imagine the possibility of a physical relationship between Holmes and his biographer, and shows that fans found pleasure in eroticizing texts long before E.L. James put her kinky twist on Stephenie Meyer’s Twilight.

While each of the SH novels published from the 1970s onwards invites a binary comparison with Doyle’s stories, works of fanfiction point to a more complex model of interdependence. It is the way in which transformative works relate to their source material and to each other that marks them as special—not only as a concrete demonstration of Barthes’ intertextuality but also as an indication of how the creative process functions. The aim is not to substitute one interpretation for another, but to allow a multiplicity of interpretations to coexist non-hierarchically.

A small sample of SH fanfiction reveals the sheer variety. Popular sub-genres of fanfiction include crossover texts (“Holmes meets Dracula”), alternative universe, or “AU” (introducing characters to a new or fantastical setting), and gender-switching. The subgenre “femlock” features Holmes or Watson or both rewritten as female. Joan Watson, as the female incarnation of John, has become a popular trope, most recently incarnated by Lucy Liu on CBS’s new series Elementary. Most prominently, though, fanfiction focuses on erotic or romantic relationships, including “slash” content (non-canonical, often homosexual, relationships). For this reason, it is often depicted as a revolutionary and counter-cultural form of expression. Fanfiction.net, the largest online database of fanfiction, lists over 20,000 works relating to Sherlock alone. AO3, a newer online archive for fan works (texts, art, and audio), launched in 2009, lists over 18,000 works in “Sherlock Holmes and Related Fandoms,” which is its fifth most populated category and is growing rapidly. This conflation by AO3 of the adaptations of SH into one category hints at the intertextual interdependence of the stories and their adaptations.

A search on AO3 for the SH fan texts with the most hits supplies, on the first page: an epic AU romance between Holmes and Watson that recontextualizes them as actors in contemporary Los Angeles; an experimental, first person narrative from Holmes’ perspective about his feelings for Watson; a humorous, fluffy piece in which Holmes proposes marriage to Watson; an AU retelling of the Sherlock episode “The Great Game” in which Watson is psychic. Each text offers a temporary reality designed to exist for the duration of the work (rather than being subsumed into the fandom’s interpretation of the character). “Second Verse, Same as the First” by Tyleet, pushes intertextuality further, weaving together Doyle’s stories, Guy Ritchie’s SH film adaptations from 2009 and 2011, and the BBC television series Sherlock, broadcast on PBS from 2010. The plot concerns Holmes and Watson realizing the nature of their feelings for each other and contains two alternating narrative strands. One is set in the Victorian era, follows Victorian social codes, and attempts to copy Doyle’s writing style, while the second responds to the present-day setting of Sherlock and follows more closely the dialogue style and conventions established by the television show. Corresponding with Deleuze, the multiplicity of responses to a finite set of source texts allows both their reinscribing and their continual alteration: when considered en masse, transformative works of SH provide infinite variety while retaining the importance of Doyle’s originals.

With Ms. James’ phenomenal success, publishers are already scouting fanfiction sites for works that can be edited to remove references to their source text (known as “filing off the serial numbers”) and marketed as original fiction. There is an overriding credo in media fandom that as long as no one is making a financial gain from the writing and disseminating of fan texts, legal and ethical rules remain intact. Many transformative works are accompanied online by a disclaimer, in which the fan/author renounces ownership of the source characters and any attempt to benefit financially.

The idea that the sources and inspirations for a work of literature can be identified and enumerated is simplistic. Doyle, having declined to seize authorial control, implicitly supported the idea of collective authorship, and Mr. Miéville’s keynote speech last month continues along this path. Mr. Miéville broached the topic of authorial elitism in contemporary publishing and, as an alternative, offered a celebration of the opening up of texts via guerrilla editing and literary mash-ups (fanfiction, by another name). His suggestion of a system of salaried state writers instead of a capitalism-driven publishing industry describes fanfiction writing communities in their most utopian conception. In his attempt to circumvent the stranglehold of economic forces on the creation and dissemination of literature, he hailed as revolutionary something that has been going for decades in the world of fanfiction, and something that Doyle, despite that fact that he viewed writing SH stories as a distraction from “better things,” unwittingly endorsed.

In addition to these (and dozens more) unofficial adaptations, the first ever “new” Sherlock Holmes story was published in 2011, with a stamp of approval from the Conan Doyle Estate. Penned by Anthony Horowitz, the authenticating claim made by the estate marked The House of Silk as “official”. But can it be said to be more “real” than any of the others? To gain the maximum understanding from the text, which, in the context of the detective genre could be said to correlate to the maximum pleasure, the reader must be familiar with multiple texts and registers. The fan is akin to a scholar (or even a detective) in this sense, constantly interpreting, assessing and balancing different socio-cultural voices and registers. In an endorsement of multiplication over restriction, the reader’s enjoyment of every SH text is enhanced by the reading of each subsequent text. It follows that, as long as the reader of Fifty Shades knows the provenance of the series, their reading of it enhances their reading of Twilight, and vice versa. If they then go on to read fanfiction based on Fifty Shades, nothing is detracted from each text, only added, and understanding (and pleasure) increases. When Miéville suggests guerrilla editing, which can potentially create infinite variations on texts and literary mash-ups, which offer the possibility of combinations and re-combinations similar to the crossovers popular in fanfiction, as a positive innovation rather than the death knell of publishing, he is endorsing the existing activities of media fandom. Unfortunately, it also exposes the current discrepancy between what is best for the reader and the commercial demands of the publishing industry. Until a solution can be reached, either creative freedom or publishers’ coffers must suffer.