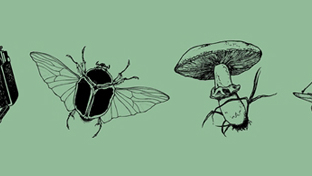 In her new memoir, An Extraordinary Theory of Objects, editor-at-large Stephanie LaCava  recounts her childhood as an expatriate in a quiet Parisan suburb. Uprooted from her New York home at age twelve, a hard-to-control environment—and mind—inspires in young LaCava a desire to own, to enumerate and inventorize tiny, beautiful things.

As she seeks out the mystery and charm in common items (as well as in the people around her), LaCava explores the line between wonder and distraction—what is curiosity about others and objects, and what is avoidance of one’s self? The book, appropriately, takes distraction as its form, veering away from tense moments into half-page footnotes that draw out the hidden histories of her items. In this manner, LaCava recounts her life, as refracted through a habit both problematic and healing.

The following is an excerpt.

Upon arrival in France, I unpacked my little sack on the wooden floor of my new, empty bedroom. There was a large arched window on the left wall covered in rusty white-metal shutters that I couldn’t figure out how to open. I stayed in the dark, exhausted to the point where I could barely sit up. One, two, three, there they were: my whale tooth, my poison arrow frog, and the sarcophagus pencil case. I lined the objects up around me on the floor where there was a little light coming through the slits of the shutters, so each one sat on a sunbeam. I spoke to the frog, “Welcome to France, I know it’s not quite the rain forest.” He didn’t say anything in return.

I woke up later that night with my head nestled on my backpack. It was completely dark and very cold. A blanket was at my feet. My mother must have come in while I was sleeping. I had no idea what time it was or if anyone else was awake. There was a little light in the hall outside the door. I stood up and lifted the blanket, wrapping it around my shoulders. It was quiet; everyone was sleeping. I walked softly through the hall and down the stairs. There was another light coming from outside. I went across the kitchen and unlatched the back doors. A half-moon was in the sky over a broken-down little house that must have belonged to the gardener. I decided to have a look, trampling a few yellow tulips before finding myself at a rotting gray door. It opened easily, letting some little creature out with a gust of stale air. Inside, the floor was covered in shards of terra-cotta pots and remains of a stained glass window. I kicked something that made a sharp clang as it hit the wall. It was a skeleton key…*

* Consider the power of the early locksmith: his skill was synonymous with security, and knowledge of his craft was hard to come by, as talented locksmiths didn’t want to share their secrets. Henry II of France’s locksmith created a famed master, or skeleton key. An agitated king, frustrated with the many keys required for the doors of his castle, including that of his mistress’s chamber, prompted the innovation. Later, Henry III would have a similar key created for his mistress, Diane de Poitiers. There is evidence, however, that skeleton keys date back further to when ancient Romans used a system of warded locks. The key was a romantic notion in the Middle Ages, for it would open not only doors but also coffers filled with treasure and castles where women were held captive. In 1568, the young William Douglas rescued Mary, Queen of Scots, from Lochleven. As the two rowed to safety, he dropped the key that freed her into the water. It eventually landed in the hands of Sir Walter Scott.