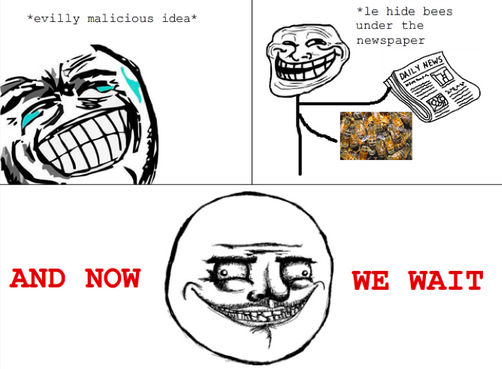 Sometime in 2008, an anonymous author posted a four-panel comic to the website 4chan.com. That comic ended with a now-iconic face: 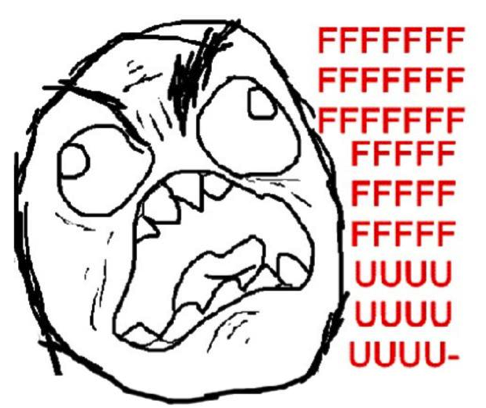 Others loved it; they made their own four-panel comics, each ending with the same image. So the iteration began. The face grew a history, a body. And it grew its very own audience, transforming all who saw it into a unique author of rage. For while one’s experience of the face is partly dictated by its lines, it’s determined more so by each reader’s past experience of the face. This is the monument of rage comics: readings build and build; comics stack up, one upon the other; and millions  of readers, set in front of screens, become passive storytellers, each with his or her own personal constellation of past readings, which informs the understanding of each new comic.

Reddit—either the front-page or the filth-foundry of the internet—created a subreddit devoted to these comics. Subreddits nest within the main site—go to reddit.com/r/fffffffuuuuuuuuuuuu (“F7U12”) to find recently uploaded comics, ordered by popularity in the form of “up-votes,” of which each user has one per comic. With a central hub for dissemination came experimentation—on a site-wide ‘opposite day,’ one user drew a face, surprised at its own new hopefulness, saying, “Everything went better than expected!” That face burrowed its way into popularity through iteration in the same way the first did—soon other faces were drawn, deemed wonderful, and copied—and so we have ragemaker.com, a rage comic creation tool that functions also as a canon of faces. Every popular face, after having crowd-sourcingly bloomed on the subreddit, finds a home there. Once canonized the face becomes easily accessible—magnifying its canonicity.

In the course of successive iterations, these faces turn semantic. They function as words in the sense that they exist in an elaborate, historical matrix of meaning—but they also act as reducible units of meaning, for faces can be broken down and recombined to form portmanteaus of emotion: a nose of disgust and the eyes of perverse pleasure combine to form some new monstrosity, a Frankenstein with notes of its parts but a melody all its own. Adding to this apparatus of meaning-beyond-the-immediate is the fact that many of the faces’ agreed-upon meaning isn’t apparent at first glance—only through immersion in their historical instances can the reader hope to receive their full effect. Rage comics, then, reward the enthusiast.

I used to read most of the comics that made it to the front page of the subreddit—the slow process of familiarization was thrilling, and watching faces emerge, proliferate, and become dynamic semantic units in “real time” kept me coming back. Though the comics themselves are mostly slipshod and forgettable, their form and the platform that hosts them are new and exciting, as are the modes of authorship and readership they allow. I’ll never forget the best ‘event’ I witnessed, one October evening about a year ago. It started here:

Simple enough. The vast majority of comics on the subreddit are short explorations of self-incomprehension. In presenting them, the author makes real, in the form of the reader, the voyeur he imagines casting judgment on his solitary fantasy. Skrooble’s comic begins with the most benign face, the audience-less blank gaze; then it winds its way through skepticism, bamboozled skepticism, and extreme focus, before awareness of the reader-cum-voyeur (“what the fuck am I doing?!”) cuts our hero down to an embarrassed rage.

Soon after, liq_weed inserted the voyeur/reader into the stage of the narrative itself:

Again, a series of faces: strain, curiosity, the poker face of dismayed incomprehension, a caricature of a befuddled Jackie Chan. liq_weed inserts a new subjectivity, which recasts the first as the “imbecile,” a face whose sunny-side-up eyes and misplaced mouth transform what was once an innocent examination of the extravagance of solitude into a moment of deranged stupidity. Embarrassing, too, as the first protagonist, dick now out, is sexually exposed.

Blissrat fleshed out the back-story and extended the narrative with this next comic:

The  prior subject is again reduced to the ‘imbecile,’ as Blissrat’s proxy wrests power from the perspective of his forebearers. The ‘imbecile’ is de facto voiceless—the moment his face appears he has no hope for productive speech. He is arrested by his appearance, cast as a sort of impotent Socratic interlocutor. This one too is sexually exposed: the previous comic made no mention of the protagonist pulling his pants up before exiting the stall—and so Blissrat takes liberties.

Brilliantly, NONSENSICALS then made the bees real, reorganizing everything, in effect justifying the initial protagonist’s anxiety, subverting the judgments made by subsequent subjects:

That ‘evilly malicious’ idea just as easily refers to the author’s reshaping of the three earlier comics. Instantly hierarchies are shuffled, and the moments of truth and falsity within this tenuously sequential world shift about. Zooming out like from a fractal, we see that just as each panel within a comic interacts with each other panel as the reader encounters each subsequent panel, so too do the comics in the sequence interact, without fixity, with what came before and what’s still to come.

So everyone becomes the ‘imbecile’—because in the eyes of the bee, who knows nothing of the sequential (hence the single panel), the previous players’ successive involvement is voiceless, frivolous, snapshots seen and forgotten, hanging together not at all. That this new subject is about to die makes its narrative dominance all the more evocative—it is almost heartfelt, the bee’s last grasp for power. Elegylegacy’s comic does not tack on any more time to the narrative—nothing new transpires—but its elegance and destructive power make it a perfect conclusion.

With that the burst of creativity mostly ended. Others contributed less successful lenses—a security guard (true voyeur) surveils the restroom in one, the newspaper bemoans its unread state in another. So one subject’s flight of fancy sparked a brief flame of spontaneous, functionally anonymous, communal authorship. Mostly I mean to preserve that flame, or at least the picture I took of it a year ago. I’ve returned to F7U12 while writing this, after a long absence, and  I’m disappointed, and a bit surprised, to find draconian new rules governing the site, including a strict two-to-eight-panel requirement, which would sadly have culled “Buzzzzz Bzzz” from publication. But no matter. There are frontiers all over. We’ve reached one coast; let’s turn South, now, or North, or tunnel to the core.