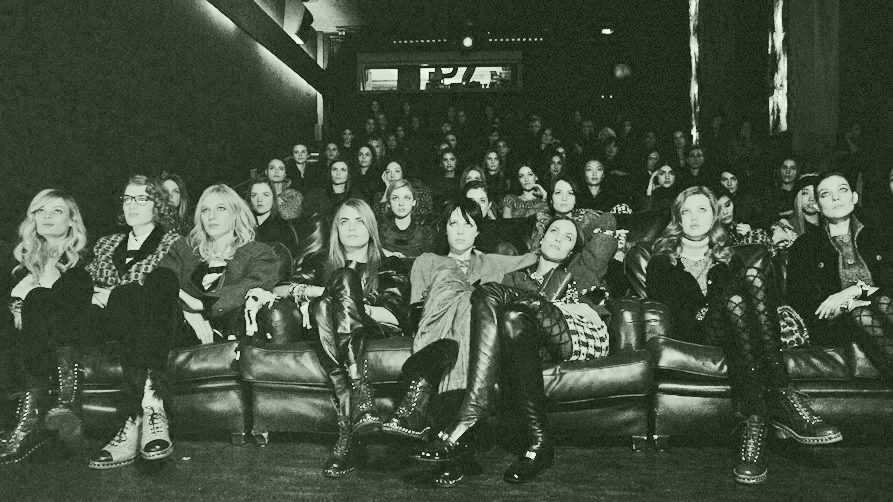 The American Reader asked five questions of Steve Oklyn, the shadowy cult-figure behind the digital manifesto, NOT VOGUE. The latter is an act of resistance that takes the form of a gnomic-visual scroll. Each entry pairs image to aphoristic fragment; what results is a kind of deranged children’s book about power, desire, and control. But what is the narrative of this tale, and who are its protagonists? NOT VOGUE de-protagonizes fashion’s major and minor players, recasting them as the wolves they are—and the implications of this recasting are as electric as they are unnerving. In the following answers, Mr. Oklyn meditates on these wolves-in-silk-gowns, the forest they roam, and the individual’s role as the hunted.
—Uzoamaka Maduka

Uzoamaka Maduka: You have said that the fashion industry, as it manifests itself today, is a system of mediocracy, and have also referred to that scene as a swirl of emptiness. I wonder if you could elaborate on how absence can architect itself into a structure, and whether it is possible for a system built of nothing to collapse.

Steve Oklyn: Absence of meaning and absence of purpose are the dominant building blocks of the global consumer network. The luxury spectacle conglomerates such as LVMH, KERING and RICHEMONT have specifically engineered absence (nonexistence) as a key component of their general theories of consumerism and behavioral command and control. The feeling of emptiness in both the spectacle and the consumer is the central ordering mechanism for safeguarding the fashion-industrial-media complex’s operation, survival and continued growth. This command-and-control network of propaganda creates a feeling of emptiness in the consumer, and subsequently drives him or her to needlessly consume again and again in order to make that emptiness go away (which of course it never does). The scenario moves way beyond a simple metaphor of chemical addiction, operating in accordance with a much deeper pathology based on social acceptance (as opposed to drug addiction, which is based on social exclusion). The basic paradigm has shifted from the idea that the architecture of reality requires a foundation and a purpose to the exact opposite, where the systems that are organized to manage us are programmed to mean nothing. That nothingness is the exchangeable currency governing us all.

UM: You have written that fashion is the ally of power, whereas revolution is the response to power. Many people consider fashion to be quite unimportant, a sort of vain pastime—in their dismissal of fashion, is also a dismissal of fashion’s ability to shore up cultural and political power systems. You seem to disagree with such an appraisal, and even to see such a dismissal as dangerously naive. Could you elaborate on the relationship of fashion to power? And what do you think we risk by not understanding that relationship?

SO: Fashion is the primary visual system of signs and signals that telegraph one’s relation to and position in the social hierarchy. From President Obama’s blue tie to Karl Lagerfeld’s black gloves (and to be honest, all of the LBDs in between), centuries of neural coding and behavioral programming are at work. Fashion is a global political organization without any need to worry about voter’s rights. The owners of the brand conglomerates are the rulers and legislators of their global kingdom. They directly control the entire process from on high. They have the key designers under contract, and they have the major magazines under their control via a steady stream of advertising, marketing and promotional initiatives. They sponsor the continuous rounds of fashion weeks (the central source of the spectacle of fashion), as well as the models, photographers, stylists, creative directors, art directors, and celebrities needed as props and cons for their campaigns and products. Every public relations firm in the sector is ultimately controlled by LVMH, KERING and RICHEMONT. There are, of course, other players and propagandists, such as the recent wave of apologists and promoters who operate under the moniker of “bloggers.” Simply put, fashion is the largest, best-funded and best-scripted NGO in existence—and one that’s not above using politicians as instruments for social command and control (Anna Wintour to President Barack Obama to First Lady Michelle Obama, not to mention the attendant barrage of media about a US ambassadorship). FASHION IS THE ALLY OF POWER. REVOLUTION IS THE RESPONSE TO POWER. The risk is already apparent: WHEN A CULTURAL REVOLUTION IS DRAINED OF MEANING, IT BECOMES FASHION. Welcome to our world of misrepresentation and controlled misdirection (“It ain’t hard to tell / I’m the new Jean Michel”). Freedom of expression is now freedom to script viruses of social authority. An example from Kanye West: “What’s GUCCI, my nigga? / What’s LOUIS, my killa? / What’s drugs, my deala? / What’s that jacket, MARGIELA?”

UM: I first heard of “fashionism” from you. Did you coin this term? To what does it refer? Is it related to what you call the “fashion-industrial-complex”?

SO: FASHIONISM is a term used to denote the fashion-industrial-media complex. I did not coin the term, but I believe that I am the first to have given it prominence when critiquing the fashion system. If one wanted to be more aggressive, one could use the terms FASHISM and FASHIST. However, those spellings get too political in my estimation—and are not appropriate for open critique and feedback.

UM: You have written that fashion is “the administration of fear.” This is very intriguing. Would you expand on this?

SO: FASHION: THE ADMINISTRATION OF FEAR is a philosophical remix. The phrase “administration of fear” comes from the title of a Paul Virilio book. Fear has become an environment, an everyday landscape. Since I view the globalized fashion conglomerates as political institutions governing every aspect of the world population’s selfhood, it seemed appropriate to apply Virilio’s thinking to the way that fashion manufactures fear on a deeply personal (and possibly subconscious) level. The fashion system generates massive waves of anxiety to ensure domination, with its most insistent message being: “Buy our products or live in perpetual fear of societal imbalance and exclusion.”

UM: Why do you maintain anonymity? How and why is your anonymity required by your project?

SO: Anonymity is necessary on several levels. Given the current societal objective of 100% visibility (social media), it seemed strategically more purposeful to communicate a message in a manner running counter to that prescribed methodology. NOT VOGUE is not a product. It is a position. It is a process. It is a procedure. Its main objective is to disrupt the fashion system. It is structured as a monologue. There is no feedback loop—no Facebook, no Twitter, no Instagram. No comment platform whatsoever. It is hermetically authored, and hermetically structured. Steve Oklyn has no interest in being promoted by the project. The project is the point of the project. The fact that we’re not selling anything ensures a certain longevity. Having the authors (Steve Oklyn, Stanley Blade and Mark Even) be non-social entities maintains the project’s message of COUNTERCULTURE VS OVER-THE-COUNTER CULTURE (OPPOSE DISRUPT DISAPPEAR).