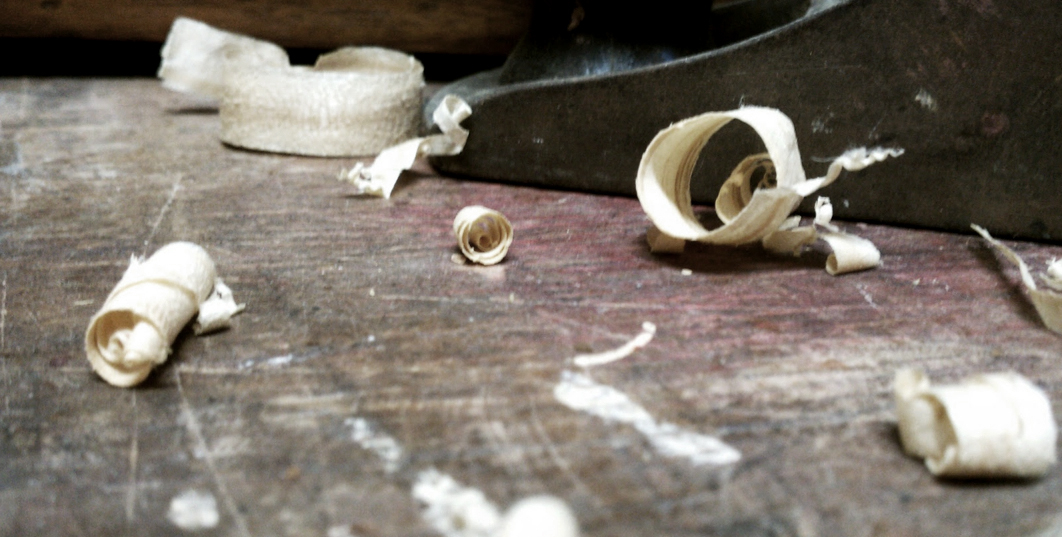 The following introductory essay and poems have been drawn from “Honor Thy Hands,” a portfolio of poetry curated by Yusef Komunyakaa, and which appeared in the February/March issue of the American Reader, available here.

Honor Thy Hands: Carpentry and Poetry
by Yusef Komunyakaa

The hands exist in collaboration with the tongue—touch and language—one informs the other. Because we touch we want to speak, to name. Because we speak we’ve learned to build beyond instinct and toward the imagination, in a refined collaboration, one that includes apprenticeship. The hands have always converged with language. Perhaps such musing verges on the conceptual, but for me the relationship between poetry and carpentry is personal. My great-grandfather and my father were both carpenters, and there my earliest memories reside. As a boy, I would observe my father intently drawing, rendering the shape of his imagination onto a sheet of paper—a meditation over days or weeks—and then he would slowly, carefully build the structure with wood and sweat, hammer and saw, and solitary dreaming. He had first constructed work sheds, and then he built fully conceived birdhouses that he’d post on fifteen-foot poles. I thought of them as backyard totems. They were always painted white and trimmed with greens and blues. And in spring I’d watch mockingbirds move into the houses, carrying twigs and bits of straw in their beaks. In retrospect, this ritual emulates the careful construction of a poem, or work of outsider folk art. In my late thirties, after returning to the South, I’d realized that the image of my father’s hands constructing those birdhouses had been imprinted in my psyche. The construction was never casual, but rather an acquisition of beauty, even in the most trying moment. Perhaps this was how my father “weathered the storms” of the Deep South, how he remained true to himself and to a spirit of creativity. Perhaps each birdhouse was a meditation on extended possibility, a deliberation that required vision and patience in the execution. “Some folks could never make a good carpenter,” he said to me. “Too much hurry in their blood. They try to get a week-long job done in one day.” Later, he’d expand his art as he taught himself to work with the same integrity on a much larger scale; he’d construct real houses in the same manner—always with a keen awareness of precision. As a finishing carpenter, he’d mastered precision, and if a doorjamb or a window frame was not perfect, plumb, square, he’d dismantle it.

Isn’t that how we poets make poems? We measure the music of a line. We shape. We cut. We revise. We re-see. Even the improvisational verse is worked, polished, finished. It becomes. As a grown man at times, in a reverie, I am still five trying to hold a plank as my father saws. Through the hands, memory awakens, and it is here in the body that poetry and carpentry are inherently connected. I knew this long before I’d read these lines from Pablo Neruda’s “Ars Poetica (1)”:

Then I cut into the board
of my choice
with the sputtering points of my saw:
from the plank come my verses,
like chips freed from the block,
sweet-smelling, swarthy, remote,
while the poem lays down its deck
and its hull, calculates list,
lifts up its bulk by the road
and the ocean inhabits it.

Naturally, the poet is in awe of the maker of things; he or she may even possess reverence for one who strives to locate symmetry in durability. We poets praise things that last; we are members of the tribe that questions obsolescence. Oftentimes, a beautiful tool is used to create an object embodying such refinement, which becomes an ode, a gesture where the maker brings the idea of harmony into existence.

The poems collected here (part of an anthology that nears completion) celebrate the makers and the made-ness of things, and thus celebrate the cultural imagination, tradition, and the worker. By making we bring the imagination to life—the making of a flying machine, a scaffold, a barn, a temple, or a funerary box. Thus these objects are homages to humanity and they are sacred. These poems embrace history—both cultural and personal. And they remind us of what we inherit, through tradition, apprenticeship, and through the material world. Carpentry, as these poems teach us, embodies the emotional: celebration, contemplation, mystery, and grief. It is an art that is solitary and communal, one that transcends time and outlives us.

The Coffin Maker
by Ishion Hutchinson

Below his unfinished house,
down almost into the gully,
in the albumen hour of day,
noon, I’d squint hard to see
his barbed-wire frame in its twist
of perpetual hush going back
and forth in the dim room
building those canoe-sized coffins
he’d then stock to a pyre
to rot in the breadfruit shade.
The tiny chiseled cross in the head
of each, his signature, flickered
like ice, a wink that made me
fear that yard, even worse a boy
who had washed his face
with rice water and claimed
to have seen ghosts gathered
at the coffins, weeping, died
suddenly, too sudden, stomped
by an immense runaway truck.
But riveted to what he conjured
at midday out of the wood
he shaved until the air was gold
with dust, the wood marble,
I could not turn, invisible
as I had become, I didn’t break
for it when the lip and spur
drill-bit starred holes to wedge
the man-length sides together
and he curled like a man shuddering
to hammer ½ fluted dowels
in place; afterwards he brushed
a thumb over each closed-up
wound; done, he’d rest, then repeat
his epitaph in wood: the cross
the whole afternoon pulling a new
casket out to the straining kiln.

The Scaffold
by Michael Collins

We went out to Rebecca Hunter’s farm
and built a scaffold for John Brown.
It’s the strangest job I’d ever done,
my first and last gallows. I’d built stages,
cribs for babies, dinner tables,
marriage beds. I used to say “I’m
friend to birth and breakfast and lost
maidenheads.” Now I’m friend to death.
John Brown’s neck, I heard, snapped
like a gun going off, but still he lived
for minutes. Death struggled to beat him.
Maybe something snapped in history, too.
Only, time didn’t die. It went mad.
Now, with every year I sleep a little less.
The day Brown hung half the country swore we’d snapped
the devil’s neck; the others swore the neck
of Christ. Whatever the case, I sleep less
and less, and more and more have dreams
where every board I cut, every nail
I hammered in Brown’s scaffold is hammered
in my skull or used to bash it in. More
and more I have to half drink a pint of gin
to get my eyes to close. My wife took off
with all my earnings last Sunday night
while I was wailing to the angel Gabriel
that all I did was build the steps and help
out with the frame. The trapdoor was another’s
work. So was the placement of the iron hook
from which the noose was hung. “What’s more,
John Brown,” I said to Gabriel, “slaughtered men
at Pottawatomie for nothing more than thoughts
in their heads. He made the nation set fire to itself.
He made farm fields spit blood. I, the day
he hung, was a step above apprentice. I wasn’t
John Wilkes Booth, who used to play on a stage
I built, and who, watching Brown hang, learned to murder
presidents. I wasn’t Lee, the future general, who smiled
at the scaffold and the troops who guarded it.
I wasn’t Stonewall Jackson, manning a howitzer
against the phantom army Brown might summon.
Blame that actor hungry for history, blame the generals, blame
Brown himself for seeing a noose as something
better than a king’s jeweled crown. I’m just
a carpenter who, called in one morning, did his job.

By Increments
by Anna Ross

This rectangular wood block,
with slanted throat to allow the iron
and wedge, the sole open-mouthed
to let what is shaved through,

the end a map of names.
Griffiths Norwich, manufacturer,
then each owner: H. Hayward,
A. Hayward, J. Hayward, J. Flatt,
casting back

to things hand-fashioned, smoothed.
Like the single-engine Fly Baby
your grandfather built, piece by piece,
in the living room.

First the wooden fuselage—
tail reaching into the hall, open cockpit—
then each wing. Canvas stretched tight
across the bones and painted white.
Sundays at the beach,

how close he seemed,
in thick glass goggles and leather helmet,
gliding over a great lake
to wave down at you on the sand.