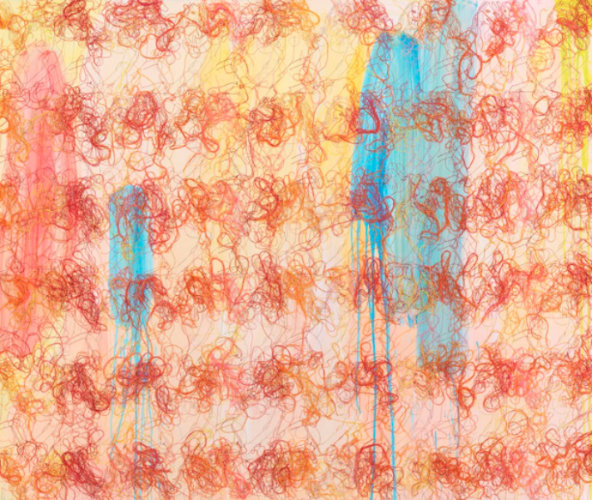 These poems have been drawn from a portfolio in Vol. 2 No. 1 of the American Reader, and they originally appeared in The Starry Womb, 2005. For Mihail Gălățanu’s full portfolio, purchase the print issue in our Shoppe.

I’ll No Longer Be Born Today

We’ve hung paintings everywhere inside her,
paintings of the world. We’ve hung them on red walls,
purple walls, hot walls, steamy walls,
pulsing walls, eternal walls,
walls of flesh and blood, in other words what generically we call tissues:
that’s how flesh holds itself together:
we sit at the loom, the flesh gets woven,
we sit at the loom, pull the shuttle, push the shuttle,
the flesh gets woven,
thread by thread—
up-to-the-minute,
as in sportscasts.

We wanted to make Mama’s insides beautiful,
to make her more beautiful,
to show slides—
so we installed an overhead projector there
(you can’t imagine how we managed)
and endeavored to project the world on her insides.
We had fun, laughing uproariously as at a cartoon,
jabbering till we couldn’t tell star from moon.

It was almost good,
almost wondrous,
the world was almost breathable, through every pore,
just as in its every allure,
or the sky through its cloud mass.

Your heart could beat quietly there,
with tenderness.
When you got old, death would shut your eyes as with a seal,
kissing them tenderly.
You would have slowly grown accustomed to your life.
Life would have tried to teach you properly.

Not evicted,
not expelled,
not dynamited,
not propelled.

Not extracted like a tooth that’s decayed,
not fired as from a job that’s
been retrenched, retired,
a product that’s too old, expired.
Not rebuked and spat through the clenched teeth of the uterus,
not puked.

And then I opened my eyes wide, scared out of my wits, sweat-soaked.
“Mama, I’ll no longer be born today,” I croaked.

We can’t discover freedom twice,
usually it’s freedom that discovers us.
Freedom digs inside us, bores into us with desperation, has sharp talons,
and brings to the surface fragments from when we were younger.

She’s Naked and by Her Nakedness She Pays for the World’s Sins,
Beginning with Mine

1. Every Line Granted Us
Is a Postponement of Death

Every line granted us is a postponement of death
as a small odd reward for the fact that we’ll die.
That is to say, we’ll pay for it all,
all these extravagant lines.

Sometimes I imagine every prominent mole
on her body as a brown coin,
as a small brown coin
with which she pays for all my sins.

2. About How She Redeems Me