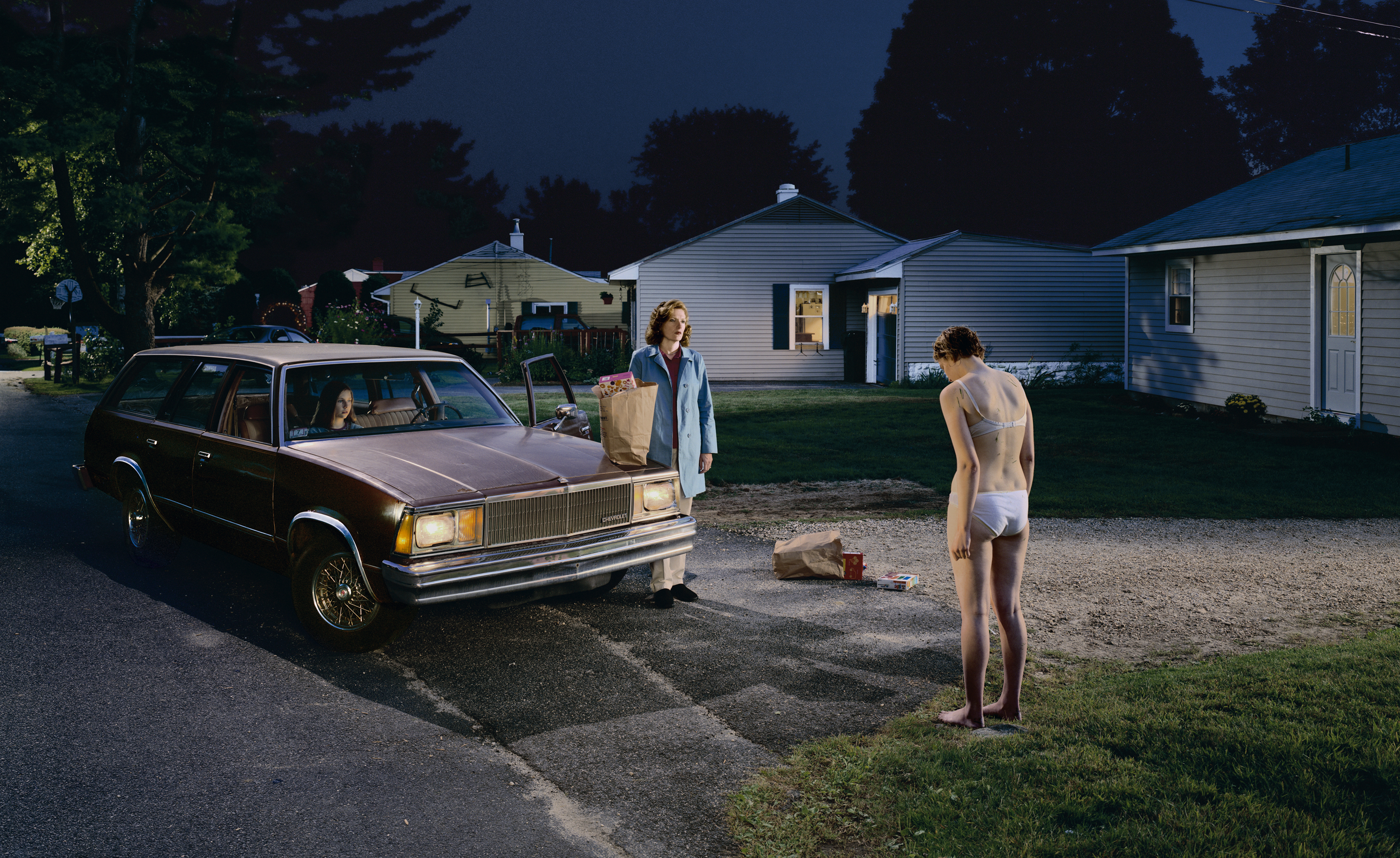 Gregory Crewdson, an American artist renowned for his elaborately devised photographs of small-town life, digs into the commonplace and familiar to find images that are haunting, surreal and—most agree—profoundly unnerving. (Though Crewdson himself, we discovered, finds his work essentially “optimistic.”)

With production teams and set budgets that rival those of entire films, Crewdson chronicles moments of disconnect—downcast eyes, faces turned away—in expansive portraits of people lost in thought, isolated and inaccessible, both to each other and to the viewer.

His images are rich in detail, and there is not a thing in the frame—not a stain, not a lampshade—that he does not carefully select. And yet, this abundance of detail is balanced with a striking lack of information—the settings are ordinary (a suburban kitchen, a living room, a dark street corner)—and, more importantly, the frame is de-contextualized: we don’t know what happens before or after, or who these people even are.

The effect of this combination of visual detail and narrative restraint is that there are as many narratives possible for each of his images as there are viewers of it: each person comes to the image with their own anxieties and desires, which they project onto the scene. To commemorate the release of Gregory Crewdson: Brief Encounters (a documentary tracing his decades of work), Crewdson sat down with The American Reader to talk about the limitations of photography, the challenge of human connection, and the overlap between the two. 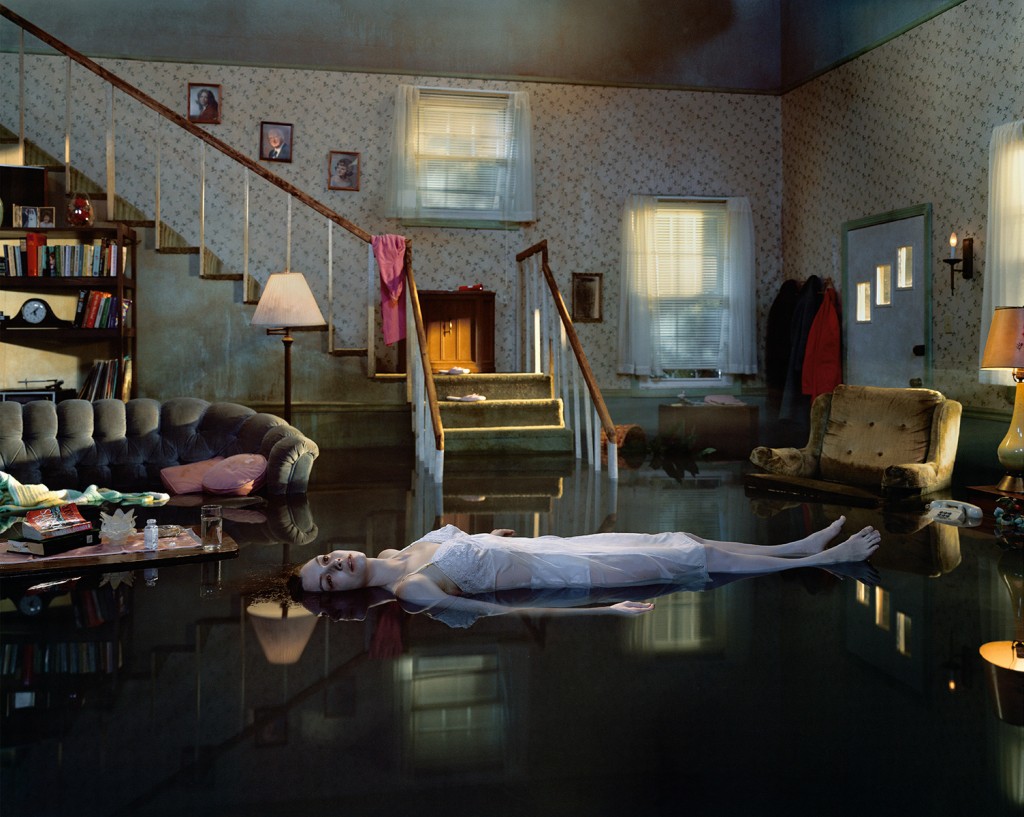 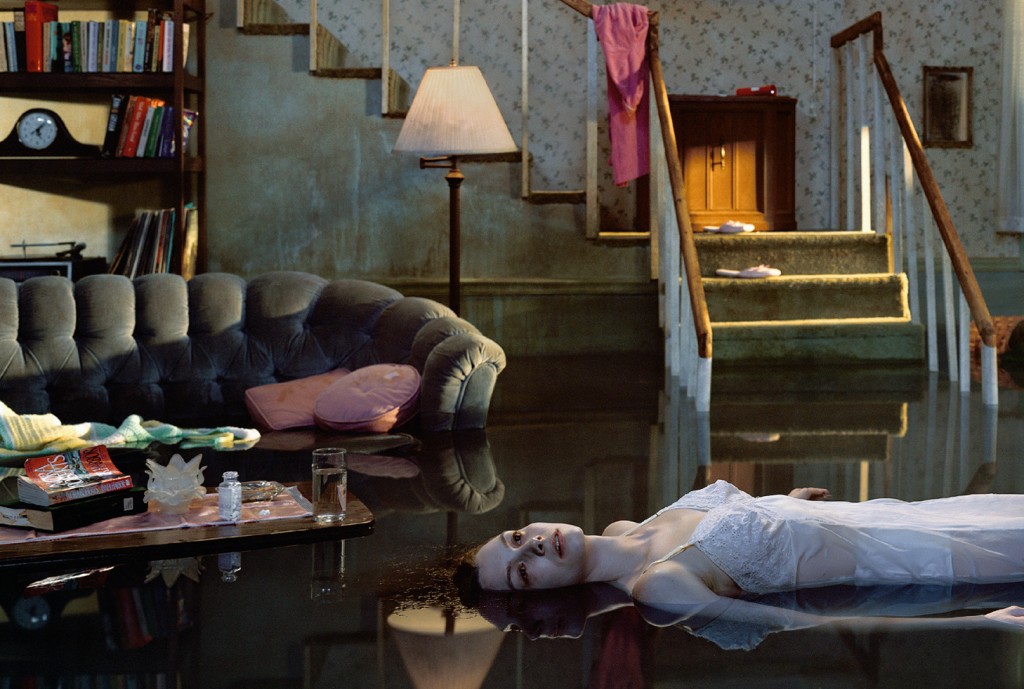 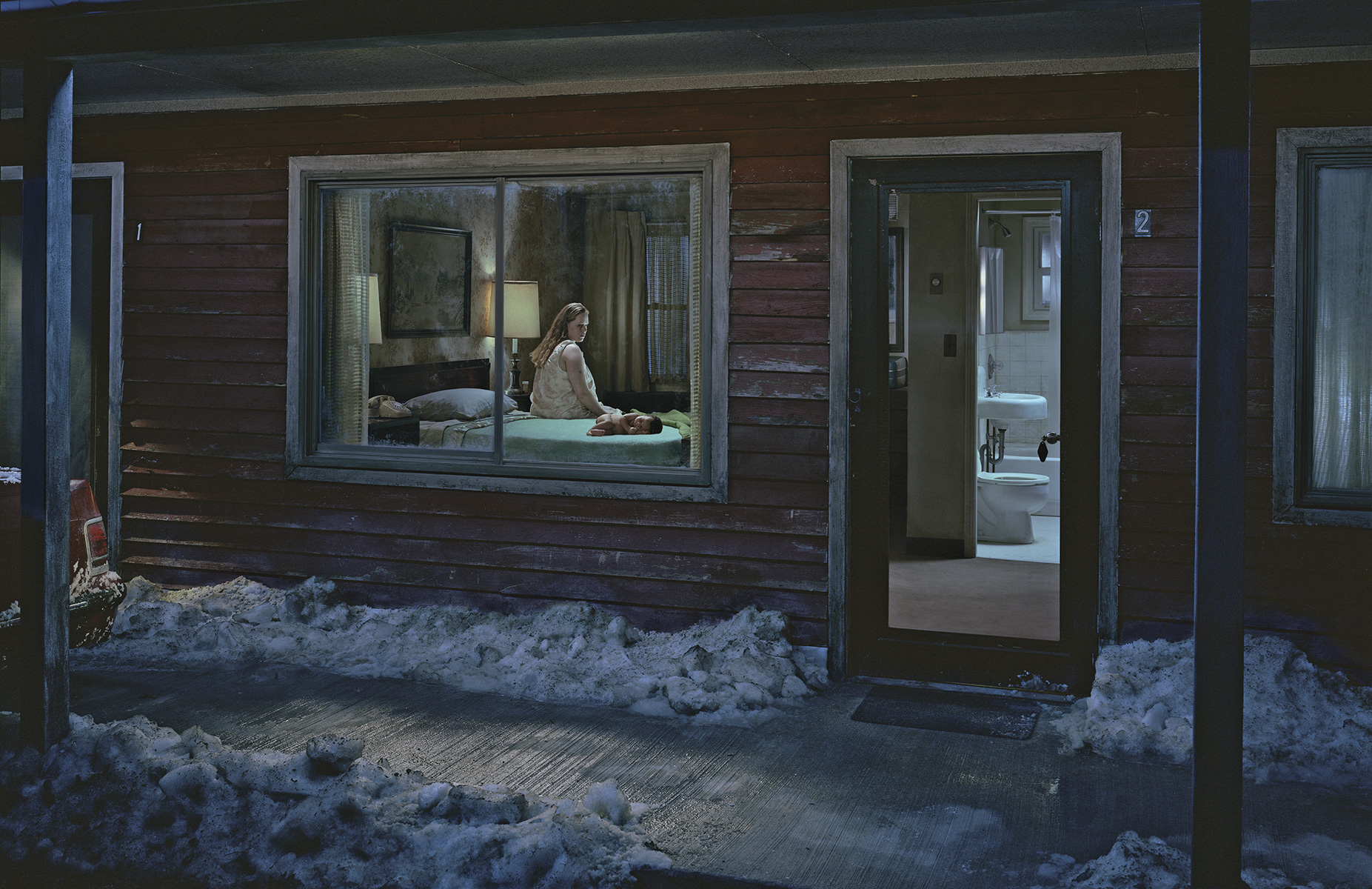 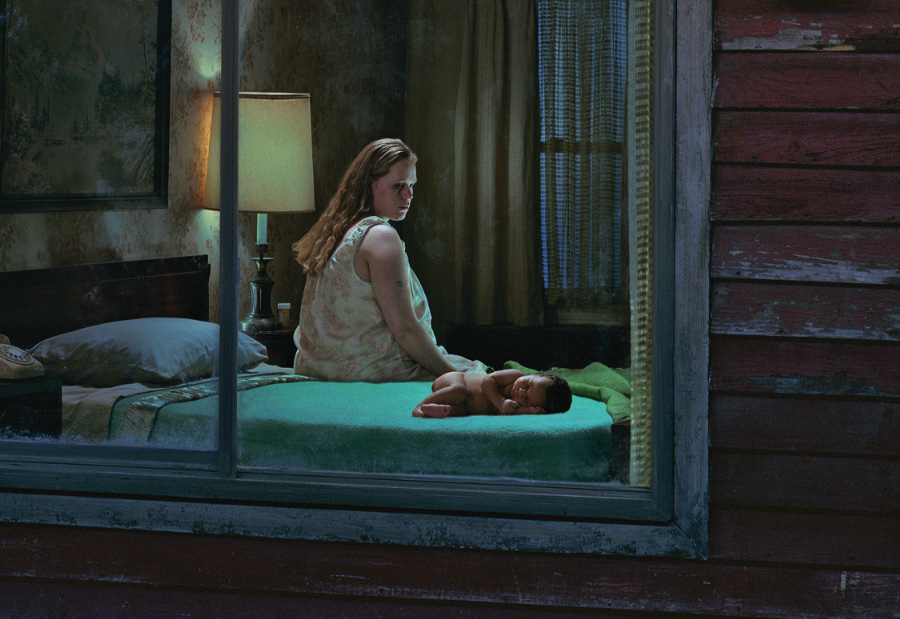 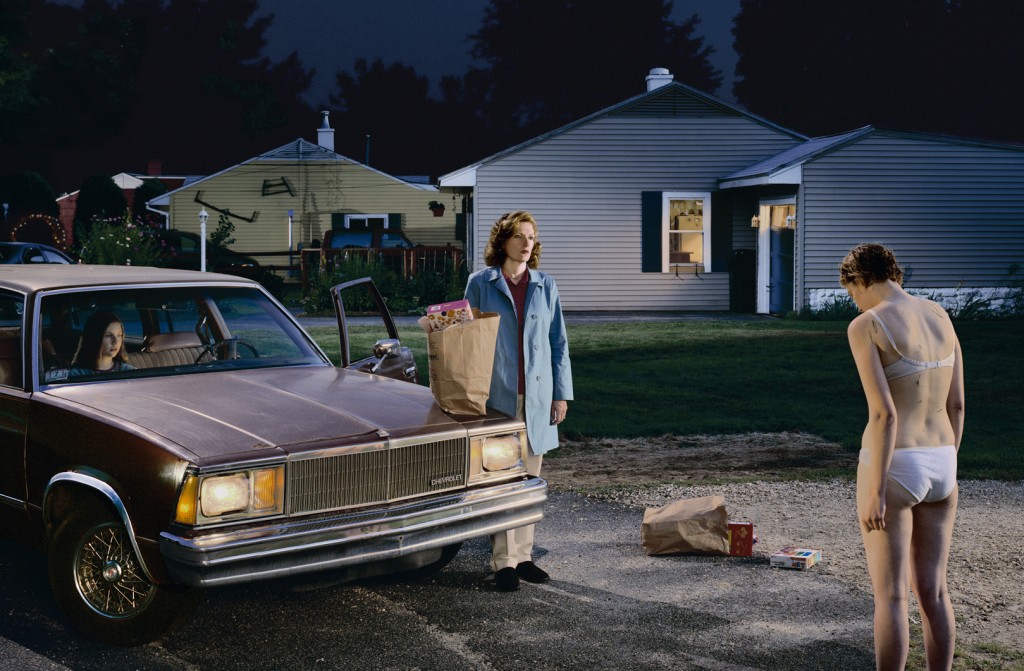 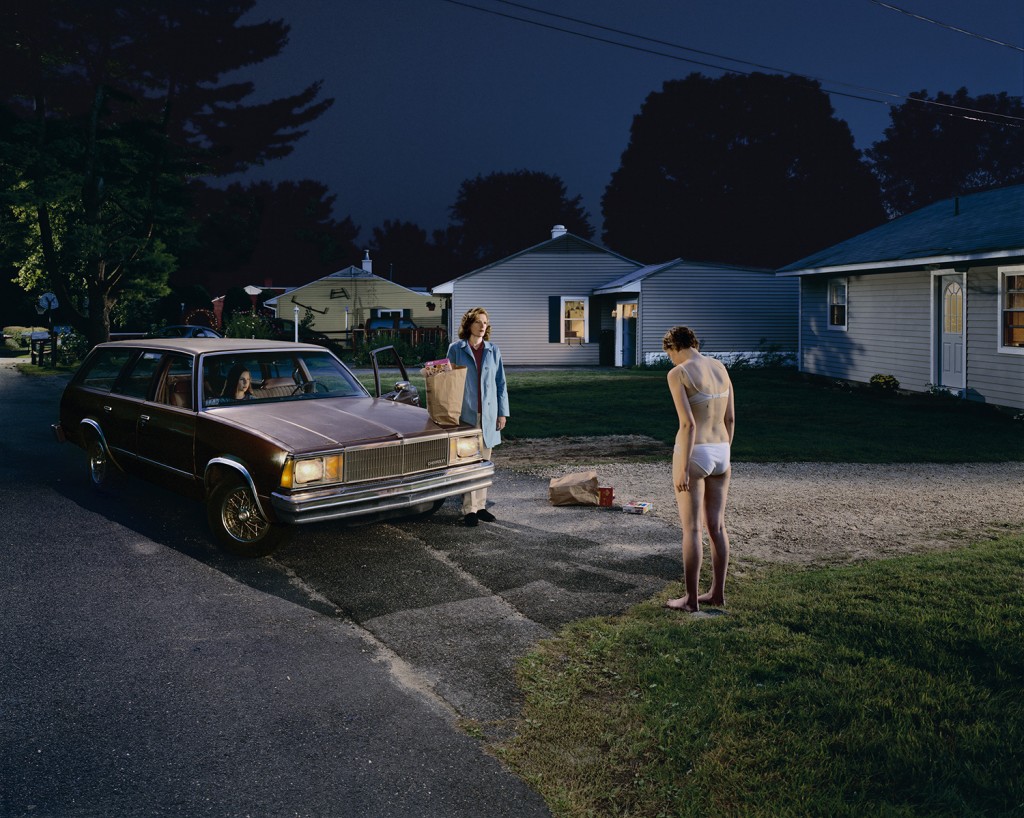 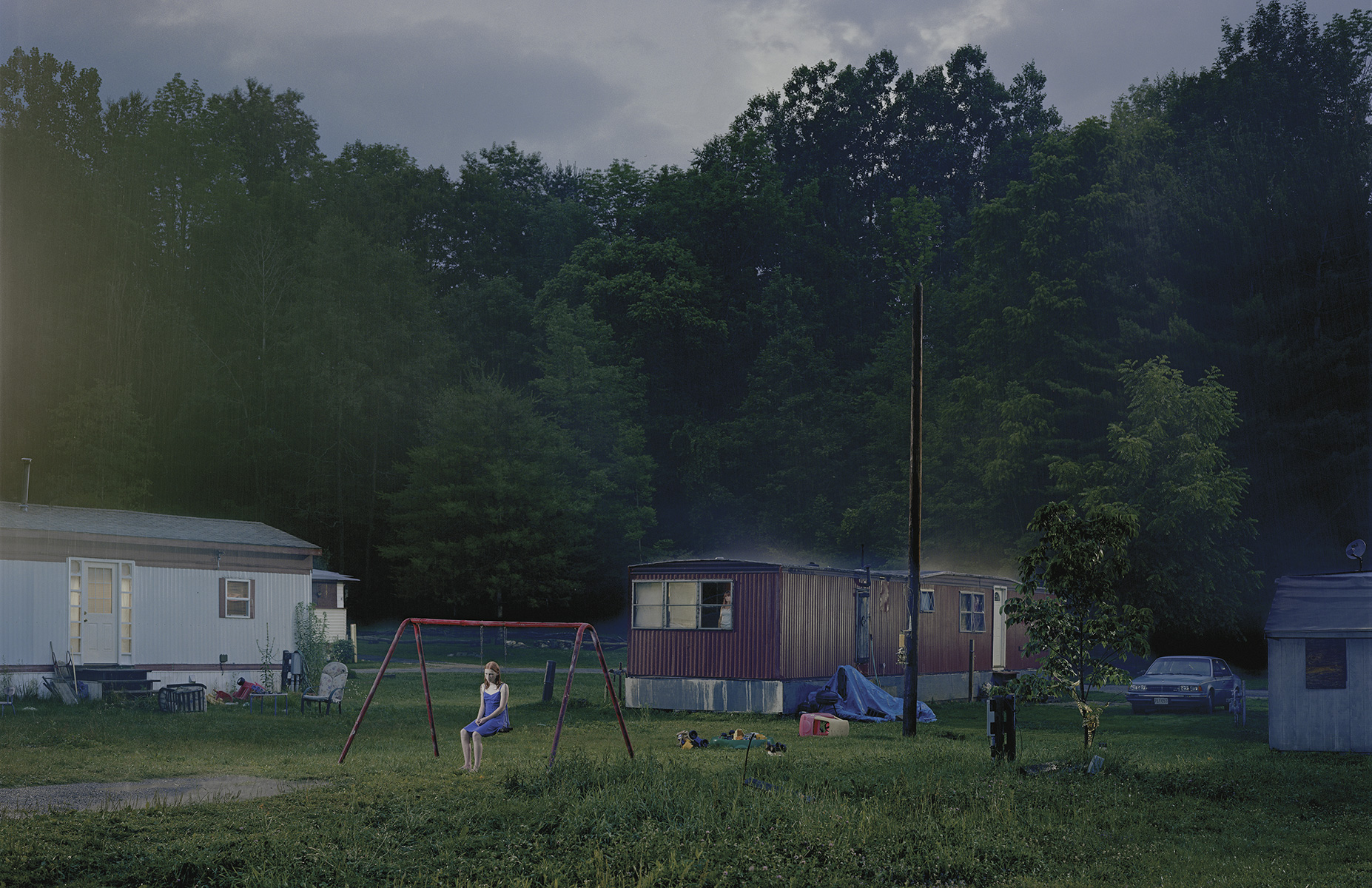 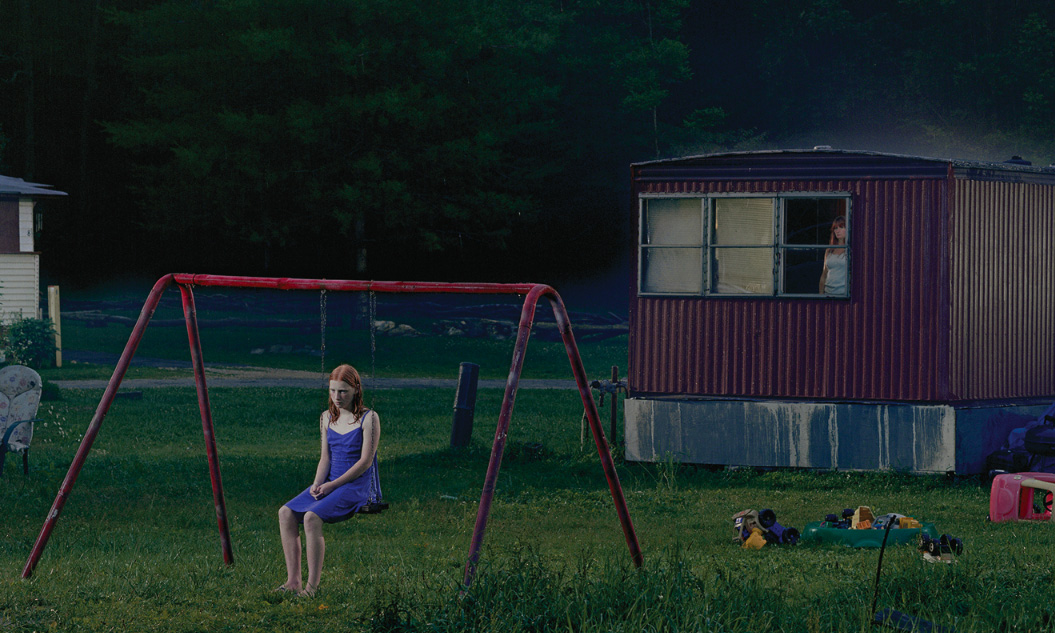 A selection of Mr. Crewdson’s photographs can be viewed in the slideshow above.

American Reader: There are so many possible narratives for each of your photographs—how important is it to you that your actors share the same narrative for the moment that you do? In the film you gave actors purely physical instructions, i.e., “just open your mouth a little bit” or “move your arm to the edge of the bed,” which didn’t require that they understood your unstated storyline. You let them be lost in their own mood.

Gregory Crewdson: I never know what to call the subjects in my pictures because I’m uncomfortable with the word actor. I think maybe subjects might be more accurate—or maybe even more accurate is objects.

(Laughs) I’m just kidding. But what’s important to me is that there’s a necessary alienation between me and the subject. I don’t want to know them well. I don’t want to have any intimate contact with them. For all the talk of my pictures being narratives or that they’re about storytelling, there’s really very little actually happening in the pictures. One of the few things I always tell people in my pictures is that I want less—give me something less.

Since a photograph is frozen and mute, since there is no before and after, I don’t want there to be a conscious awareness of any kind of literal narrative. And that’s why I really try not to pump up motivation or plot or anything like that. I want to privilege the moment.

That way, the viewer is more likely to project their own narrative onto the picture.

AR: Is projection something that you’re trying to elicit?

GC: What the viewer brings to it is almost more important than what I bring to it.

I’m very moved by the fact that people are drawn into the pictures and that they do bring their own history and their own interpretation to the photograph. I think that’s why they work in a certain way.

AR: In one of your most famous photographs, the woman sits in a motel with her baby lying beside her. Watching the documentary, we learn that the bathroom is a reconstruction of the bathroom in Psycho. Do you want viewers to recognize these symbols and be subconsciously affected?

GC: Right. Well, in that particular case, for me that was the starting point. I started thinking of motel rooms, and I thought of that motel room in Psycho. But that was just a starting point, and through the process of making the picture, the picture changed.

I think subconsciously we all have a connection to that imagery and a certain kind of dread.

AR: Do photographs naturally inspire or have more potential to inspire dread? It’s so interesting that you used that word because I’ve felt that in front of photographs before and I’ve just never put my finger on it. Is there just something about a still image?

GC: That’s an interesting proposition. I do think that dread is about a certain kind of expectation. And the fact that a picture can never resolve itself the way a movie can—maybe that’s a specific kind of dread that becomes associated with a picture.

AR: In one scene of the documentary, you’re just driving around scouting for a location, and you say something like, “How strange, what is that?” And soon this becomes your location.

That strangeness, that moment of curiosity—would you describe that as the point of departure for your photos?

GC: That’s a good question. When we were shooting the documentary, I was never conscious of filming except for when I was location scouting. In a way, that is the most important part of the entire process—and the most private. I’m so used to doing that alone. Unlike every other part, it’s just me, alone, on location.

It’s very hard to describe what I’m looking for—something that feels both familiar and strange at the same time. It’s not enough for it just to be strange or mysterious, it also has to feel very ordinary, very familiar, and very nondescript.

AR: So when you see it, it just feels right to you? Like it’s been in you the whole time? Or are you just punched in the gut and all of a sudden feel like, “Oh my god, that’s what I have to do”?

GC: No, it’s a slow process. Usually I’ll drive to certain locations over and over again, over a course of months really. And then it might just be I hit it at the right time, and the right light. And then I might go to that location over and over again, and then what happens in that lag time where—the image sort of locks in—all of a sudden I see it in my mind’s eye. All of a sudden I see—I could see the narrative. I could see the image.

AR: So you’re sort of dating these sites. You keep going back to them. It’s almost like you’re waiting for some confirmation that this place is “The One.”

AR: So, what about that very striking photo of the woman floating in her half submerged living room, which you said was in your head for years? That’s very different. That’s almost like instead of dating, that’s your dream girl. You’re just waiting for the right moment.

GC: Yes, that’s a picture done on a soundstage from an earlier series; that’s from “Twilight.” In “Twilight,” the narratives are more literal, and the event is much more spectacular. The pictures in “Beneath the Roses” are much more psychological and grounded in reality.

AR: Towards the end of the documentary you talk about the inevitable disappointment of this imperfect translation of the image in your mind into what it becomes. Are you always disappointed?

GC: Yes. I think that’s the nature of representation. No matter what it will disappoint, it will fail in some way.

But that’s also part of the magic of art. If every picture met my expectation in exactly the right way, there’d be no mystery; there’d be no gap between what’s in my head and the picture I make. So it’s necessary. But it sure disappoints you. It’s also what propels you to make the next one.

AR: So you’re compelled by your disappointment?

GC: Yes. You always feel like you’ll make it the next time.

GC: Yes. But isn’t that the case for any writer, or musician, or filmmaker, or whoever it is? You have this ambition to make something perfect, exactly right. Of course, necessarily, it fails in some way and you have to accept that for what it is, and then you’re on to the next thing.

Part of the process is letting that picture go.

AR: Well you have such a deep involvement with the photo, not only arranging and waiting for the right moment but then also these editing processes where you can say: “I don’t like that baby. We need another baby.”

So, there must be this moment where you just throw up your hands and say, “I can’t—this is the closest I can get.”

AR: To shift gears for a moment, even though your photos can convey such an intense moment of isolation, they can be deeply interpersonal. A lot of them tell stories of the kind of isolation that you can feel even in company, because we can only ever know what’s happening in our own head. I think your images sort of dramatize this moment. Not only because they sometimes feature two people having a very different experience in one space, but also because this moment is echoed when the viewer looks at the people in the image and can’t access their thoughts. It’s like a double blockage.

Do you think that disconnect is sometimes why your photos are called dark?

GC: Yes, one hundred percent. I think you’re absolutely right. There’s a parallel between me going through these enormous efforts to try to make a moment that means something—and in a way, the figures are doing the same thing. There is that parallel, for sure.

The whole reason I make these pictures is for those moments of clarity. For that single moment, everything seems to make sense in my world. And I think we all look for that in our lives, because our lives are generally filled with chaos and confusion and disorder and complication. And we all strive to find moments of clarity, of order.

AR: Last question (and this is sort of my favorite one for some reason). I don’t know why, but I’m just sort of attached to this question.

Even though it can be so arduous and frustrating, the process of setting up these sets feels so reminiscent of childhood play. Dollhouses and wooden blocks and metal soldiers are all toys that give you that freedom and pleasure of playing and setting up. Does the process of staging ever recall childhood play for you? Do you remember having childhood moments of frustration or limitation in staging childhood play? Like say you’re trying to make this expansive battle scene with toy soldiers and suddenly you run into the couch.

GC: I think that’s really kind of a beautiful point, that at the core there is something very childhood-like about the whole activity of building and constructing a world. My mom just recently reminded me that I used to build these little miniature worlds outside at our country house and populate it with little figures. So yes, definitely.

That whole thing about trying to create a world – there’s something very connected to childhood and reverie and daydreaming and fantasy.

I was really fixated when I was a child. Again my mother was just talking to me about this, about how I would how try to get details exactly right. I guess I was always very persistent.

But I’m not that particularly talented in terms of making anything or—I’m not technically efficient. I certainly don’t know how to draw very well or paint, and I’m not good with computers. But I think the thing that I’m good at is willing something into life, no matter what. I do what it takes to get it done.