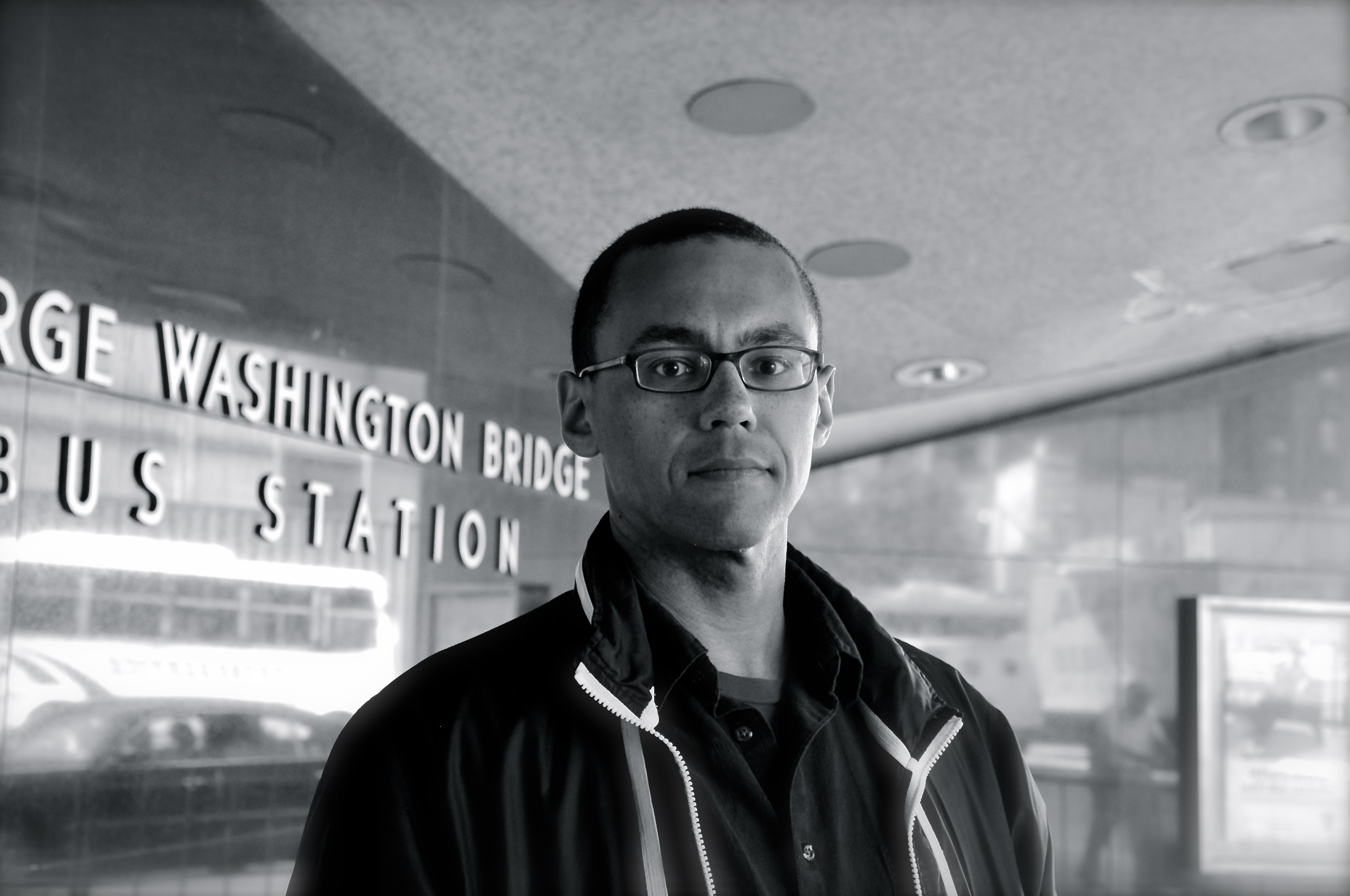 Victor LaValle, photographed by Alyssa Loh
Tweet
Victor LaValle, photographed by Alyssa Loh
The Devil in Silver has been acclaimed for its brutally honest portrayal of mental illness. Your stories are often labelled as “dark.” Do you find that they have a particular mood?
I’ve always thought of my stuff as maybe not happy, but funny and endearing. So, again and again when people say, “I love that book but it’s a rough ride,” I’m always shocked. I never think I’m writing something dark and unpleasant.
Stories that are so clearly wish fulfillment, where the main character is so unreservedly good and done wrong by the rest of the world and deep down people just don’t understand him—to me, that is a more frightening story because it is a window into someone’s mindset that they really think they are flawless. Really, it’s only everyone else’s fault that there are problems in life. I find that troubling but other people find that story heartwarming and pleasant. Really, it’s just taste.

The monster, the nurse, and the mental hospital are all villains in this novel. How did you deal with the archetype of “the villain”?

For me, they weren’t archetypes, they were things I’ve known personally. As I was reading sections of [the novel], I started thinking about the mental hospital, the staff, and the patients, and that the reader doesn’t have the same familiarity with these places, and wouldn’t be able to understand them immediately as specific places and people. What if instead of fighting that, I played with it? So, in the beginning of the book I give the readers exactly what they think they’re going to get, but constantly undercut it. As soon as you get inside the [New Hyde Mental Hospital], I describe it as a low rent Motel Six. Everything is bland office furniture, cheap landscape paintings. I was trying to undercut the gothic image of the mental hospital by turning it into something much more like a real mental hospital—which is just a run of a mill building that could be a Staples, if the walls were torn out, or it could be a mental hospital.

That’s what I also tried to do with the patients. In the beginning of the novel, the old woman character is the wacky old lady. The OCD character is just obsessive about things. [The protagonist] Pepper is a big, dumb galoot… As the novel continues along, I unravel layer after layer from each of those characters. So, the wacky old lady is also someone who actually gets other people killed. The African immigrant with OCD is also working from a very rational place because he wants to report the abuses of the hospital. And, the big, dumb galoot, is actually a thoughtful, caring, selfless, human being—which is not necessarily what a big, dumb galoot is ever supposed to be. The idea [was] that I was going to take the types and upend the types.

The novel has been compared to Ken Kesey’s One Flew Over the Cuckoo’s Nest, a novel so representative of its generation. What or whom is The Devil in Silver speaking to?

I love that that’s what they are saying. First, I want to make the point that what made One Flew Over the Cuckoo’s Nest great was it was an allegory for its time. It was a generational allegory. I wasn’t trying to replicate that allegory because I didn’t think the point anymore was that there was generational struggle between the young and the old. My book, of course, is an allegory of our age, for our time; which, I believe if you look in all the newspapers you’ll see it is a battle between those people who the system works for and those who the system doesn’t work for. And, for those who the system doesn’t work for, all of us are trapped in something like an asylum. For New Hyde, I was very specific for a reason. A white dude, black dude, white woman, mixed race teenage girl, Latino dude, Indian guy, a Japanese dude: all sorts of people, classes, were trapped in the asylum. My point was that in our time all of us are trapped inside an asylum that is being run not by the staff, but [by] some very, very wealthy monsters, and those monsters are not trapped in the asylum. In the novel, none of the masters of the game—the ones who really run the hospital—show up in this book. But in every way they manipulate the lives of the people inside. The reach of their power is astounding. The way this system runs is designed not to benefit the people inside the hospital whether it’s the staff or the patients. All the money, all the benefits that the hospital brings are for people who sit on boards. And, for me, that’s why the novel is an allegory of our time and different from Cuckoo’s Nest.

You have spoken at length about the history of mental illness in your family. Why did you decide to fictionalize those experiences? What about fiction enabled you to write about mental illness?
I would say for me, as someone who mines autobiography very deeply, it’s not possible, at least not yet, for me to write objectively about those life experiences. I’m still dealing with them in many ways and they’re still too personal. I still don’t understand my real place in them yet. And, if I can’t make that distinction for myself, then I can’t really do what a book should do when you publish it; which is no longer simply be something for myself, but be something for readers. It can’t simply be, “here’s all my personal experiences and feelings,” because then that’s just a diary. For it to be book that stands alone, it has to be something that serves the reader. And, for me, that means it has to start becoming a story, which means I start thinking in terms of fiction. All of that is a method of trying to get outside my own tangled feelings about the material of my life, and turn that it into a more clear-headed and generous vehicle of a story. Because, you know, in my personal life, I find it hard to find the humanity in those people who I both love and hate who are close to me. But in a story, I can get enough distance that I start to say, “there has to be more to them than this grudge I’m feeling toward them.” Then I start adding layers and layers and then suddenly they become richer people. That’s why it has to be fiction for me. Other people can pull it off in memoir but I can’t do that yet.

Who do you see as your influences?

What are your current favorite books and authors?

E.L Doctorow says that a novel should “take on the world”. I believe all your work meets that standard. Why is that important to you?

To me every sentence of a piece of writing demands that the writer is aware of the world around the person and is thinking consciously about how and why that world has an impact. If there is anything that I find troubling, it is when characters seem to exist in a vaguely upper middle class educated world, or in a vaguely urban world, but there’s no conversation about what that means. It’s problematic when those details or points aren’t there because you’re seeing a writer rob themselves of actually some of the best material they ever are going to come across. Writing about the suburbs means nothing. Writing about a specific suburb in the outskirts of Maryland in 1988 does mean something. And what does it mean? It’s just shortchanging yourself so much to not grapple with the world you are living in. I can understand why because it is intimidating to know as much as you feel you have to know. And, also it can feel like I don’t want all that extra stuff to come into the work because it’s not about that. But the minute you say it’s not about that, it’s probably because you are choosing to ignore some troubling aspects of class or background in some way that benefit your character that you don’t want to wrestle with. I totally agree with [Doctorow]. Every writer should take on the world because it makes the work better. You lose if you don’t take on the world.

Is it fair to say that class is the vector that you’re seeing this through?

Class is the hardest conversation for Americans to have because unlike race, gender, unlike sexuality, it is actually the only thing we like to still pretend doesn’t exist. I think it’s because we like to believe it’s one of the only things we can change at will, which isn’t true. I’m interested in that nine foot, slobbering monster in the corner that everyone refuses to admit is standing in the corner. It’s there. It’s got blood dripping from its mouth. Everyone just goes, “class, it’s not there, it’s just not.” Growing up in Queens, I didn’t learn this other falsehood of America: certain classes only look certain ways. I had no illusions that the class I was raised in was a monolithic group.

In your reading/talk at the Center for Fiction in Manhattan a few nights ago, you said that you find the seeds of story everywhere. Can you elaborate on this idea?

The reason I think of life that way is even though I feel like I have a pretty rich imagination, nonetheless, it is still a pretty limited resource. But if I’m in a place and I’m writing, and I see in passing some beautiful, interesting, weird moment—that’s mine now. The world is dying to give you inspiration and material. The nice thing about being a parasitical writer is that you should be able to take them. I think when I was younger I thought “no, no, no I have my story, I know exactly what it’s going to be and I have my memories, and that’s it”. As I got older, I realized I was not confident and I was afraid if I didn’t stick to exactly what I had in mind at first I was going to disappear, I was going to lose my story. But now I know, going out in the world, is only going to make it better.

This interview was conducted for The American Reader on September 20, 2012 at the Dunkin Donuts by the George Washington Bridge, where Mr. LaValle wrote his most recent novel, The Devil in Silver.