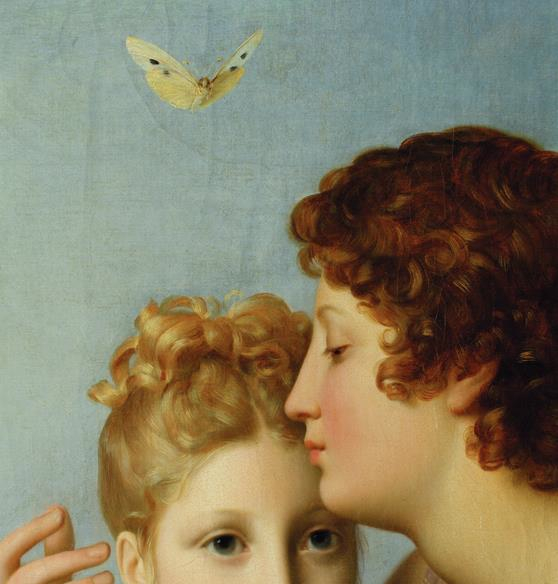 Detail from “Cupid and Psyche,” by François Gérard (1798)
Tweet

We are pleased to introduce the curious and terrifying work of Szilárd Borbély to an American readership. The poems that follow have been drawn from two collections, The Sequences of Amor and Psyche and Berlin-Hamlet, and are translated from the Hungarian by Ottilie Mulzet. The full portfolio can be found in Vol. 1 No. 4 of the print journal.

If I come to Berlin at Easter, would you have an hour to spare,
so that I could visit you? It could be at any time, for I won’t
have any other business in Berlin, save our meeting. I hardly
have a proper suit in which to appear before you. But that is truly

incidental. One easily slides into temptation, however. I am only
travelling to Berlin to show myself to you, the one misled
by my letters, so you can see who I really am. I could not accomplish this in writing,
because I was in defiance of myself: in the light of reality

nothing remains hidden. Presence is irrefutable. If only I will have had
enough sleep when I meet you. If only my knees won’t shake. What
a farcical and vague monologue this is. If I travel,
I will be staying in the Askanischer Hof hotel on Königgrätzstrasse.

I must speak of my fear. Of the mornings
when I awoke drenched in sweat. After dreams
without memories. And I wanted nothing. Simply to disappear. Silence,
muteness. I didn’t know why. Then
it came to me: What would happen, if—? What would happen if
there wouldn’t be anything anymore. Everything I’m doing now

I wouldn’t have to finish. All of those things
which I don’t know how to do. At once to reach
the end. I should like to reach the end. Let there be an end.
I began to desire this. If I would depart. Perhaps then

On the Wings of Freedom

Being lured into the butterfly-hunter’s snare
was purely intentional. The intentions of a body
that desired what was beyond it. Savouring the
anonymous violence which now could be perpetrated,

the body having become a mere object. Suffering
like an animal. But the soul is free. To know
that dying is almost a joy to the physical being
when its spirit is a mere pawn. “Who are you”—Psyche

asked of the stranger. “Bitch!—I’m going to fuck you,
so just shut up and lie down”—came the answer.
And darkness was all around them, as if they were in someone’s mouth.

Because language is like night-time. Moist,
an indecipherable series of grunts. Pure dread, and
inchoate visceral shrieking. It is inhuman.

So may I come to visit? If so, please respond in time
to the following questions: what is your telephone number? Shall I dress
in black, or would it suffice simply to arrive in my summer
suit? I would much prefer that, as it would be more convenient, or more properly

said, the former is virtually impossible. Shall I bring flowers
for your mother? What kind? I am going to stay in the Askanische Hof
again. It is difficult to say what paralyzes me so in your presence.
Why would I prefer to struggle like a beast on the forest’s earthen floor? There must

be a reason, mustn’t there? It terrifies me, if you say “I don’t understand
what this is all about, he writes often enough, but there’s no rhyme or reason
to his letters, I don’t know what they’re saying, we haven’t grown
closer, and there seems to be no hope of that, at least for now.”