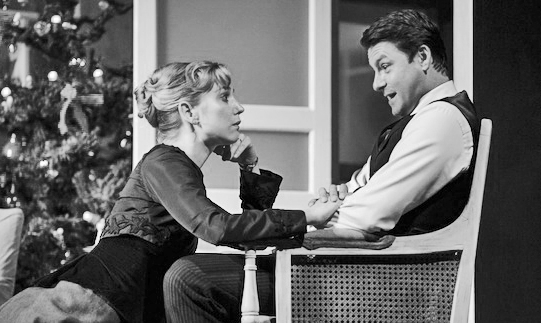 Last week, I saw BAM’s production of A Doll’s House. I was surprised to find myself most moved not by the production itself, but by the reaction to the production. I admit this is due in small part to my having once studied the play. But I studied the play back in high school, so maybe it has nothing to do with that, and anyway, the person with whom I saw this production had not previously read or studied Ibsen, and found herself similarly affected by the audience’s laughter, more so than she was affected by the players and their interpretation of Ibsen’s drama.

The play is about, among other things, gender roles and relations, and being premiered, as it was, in 1879 in Copenhagen, one can imagine that it had a certain effect that it might not necessarily have now, because the role of women in society was so very different.

Not that the role of women in society was actually so very different. It wasn’t very different at all. Women still play foil to men in very insidious ways, even when they carry briefcases, or have multiple sexual partners, or drive cars, or pose in magazines or in selfies or for Terry Richardson, who keeps prodding you and you know, violating you, but gets to keep working because you know, you’re not really worth all that much in the end, you’re a nuisance, but also a beautiful bird, mischievous and beautiful, but you’re also in a cage, for your own protection, and that cage is: look this way, be this way, this is how you will enter, this is what you will say.

That said, if you don’t want to be a doll, you are now free to no longer be a doll. But now, you will be an action figure, you will be a boy’s doll, and you will act like this action figure, and you will talk like a boy when you play with boys, and you will take it like a man when a man gives it to you like a man, and so forth. Basically, just, we’ll have the same gender roles, you see? But now you should feel free to jump between the gender roles, which will not be changed in any way, so that when a stay-at-home father stays at home, he will still be oppressed in exactly the same way stay-at-home mothers were oppressed, only it’s better now, and it won’t hurt him so much, because he’s a man.

Now, the audience kept laughing when Nora’s horrible husband kept saying these horrible, ignorant things. Like that he owned her. Like that she was even, in a certain way, like his child. Like that she had become, through her folly, both his wife and his child and that was touching to him. The audience laughed and jeered and what they were communicating through this laughter and jeering was: Oh, little do you know, evil husband, you foolish man…how things will and have changed!

Because he was so backwards, you know? And then it is very triumphant when Nora emerges at the end, only I was left confused because a thing that is caged for very long, a domesticated animal, I mean, if you release the animal into the wild, doesn’t it normally get eaten up?

So I wasn’t sure why that was so triumphant. It was necessary, sure, but also it seemed very clear that this bird was going to be eaten so I am unclear as to why all the satisfied reactions.

Unless it’s because she wasn’t doing anything triumphant at all. Out there, in the crowd, was another house, fit for a doll, ready to receive her. Equally as demanding as her bad husband. Because even when Nora said she needed to find out for her own about religion and about God, the audience laughed knowingly—as if they assumed they knew what her ultimate answer would be.

They assumed she would reject God if she ever got to think for herself. But that assumption was tantamount to thinking for Nora. And since there is no sequel, they had completed her in their laughter.

The laughter said: this is where the play ends, but that’s fine, because I know what happens next. There is no need for you to finish your story, because I can finish it for you.

You will leave this house and go to another. You will have wild love affairs and you will be liberated by them. You will denounce God and religion and be better for it. Maybe you will never marry again, but if you do it will be something more like the marriages we have. You are ours Nora. You are one of us. You are both something we want to embrace and take in, like a wife, and something we have produced, like a child. And that is touching to us. You are naive. But we forgive that in you because that is to be expected, given the time in which this was written, given what you are.

I don’t think that is how the play was received in 1879. I think in 1879 Nora’s future was a question. And it remained a question because it had not been answered, either by Ibsen or by Nora. And the audiences did not say they knew, they did not presume to know or to understand what would happen next.

And so I was put off. I was put off by how eager we are to presume we know a woman’s path or a woman’s answer today. To know what she wants or what she should want. And I look forward to a contemporary production of A Doll’s House that will unsettle and even horrify its audiences, occasion their fevered introspection and reflection, in the same way and with the same measure that one imagines the 1879 premiere unsettled and horrified Copenhagen.