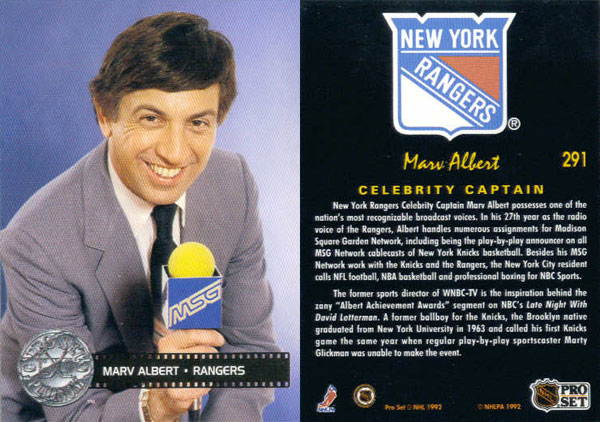 The past few days have been among the most sports-filled of the year. The San Antonio Spurs won the NBA Finals, the FIFA World Cup has just begun, the LA Kings won the Stanley Cup, Martin Kaymer ran away with the US Open, and baseball continues to be baseball. Such entertainment for so many people!

I appreciate sports for their brute simplicity when it comes to narrative. Athletes compete, one outperforms the other, and victory results. Lots of complex strategy and theory is involved, sure, but watching the play-by-play of any organized sport entails the strange pleasure of watching individual events form together to create a story. Pitch-hit-run, throw-catch-run, kick-kick-kick; all of these sequences are infinitely repeatable in different combinations, and the repetition is fun, at least for most of us.

The story of a game is simple, but this is not enough for the journalists and sportscasters that interpolate these events for us. Instead they need to narrate, to interpret, to give emotional heft or satisfaction. And they usually do it poorly. Yes, it is well-established that sports commentary is rife with cliches. But some sports cliches are so bizarrely confusing as to border on the surreal or the nonsensical. So today I want to try to talk through some of the more troubling phrases I hear again and again, to try to make sense of the narrative tools sportscasters use to explain pure action to those of us who need more than plot.

More and more, sportscasters narrate their own narration: “When you talk about” the prototypical quarterback/point guard/third baseman, you have to talk about…It’s like all sportscasters took Intro to Media Studies, heard that “all discourse is meta-discourse,” and never looked back. It’s clear that, like all 24/7 media outlets, sports journalism has to create its own news, and this has created some sort of recurring linguistic loop. We talk about talking; this is how we create meaning in sports journalism. Both announcers and players also often claim “I can’t say enough about” someone or other, either a player or a coach or a scheme or God. This makes a strange sort of sense; what more could they say about someone’s effect on the game, what would make it more sensible? We demand more of these interpreters than they can supply; they are left to narrate their own inadequacies.

One of my favorite moments in sportscasting is when the color commentator announces that some individual achievement couldn’t have happened to a nicer guy. This statement announces the satisfaction that we all want to feel with victory or success: empathy and resolution. But with its repetition, I begin to lose my grip on its significance. Yes, superlatives are overused in sports, but this sort feels more personal, and stranger: we aren’t describing a fastball or QBR, but a man’s (always a man’s) niceness. Also, the certainty of what couldn’t happen takes on a darker character; it didn’t happen to a nicer guy, it couldn’t, it wouldn’t, only this guy pitched that no hitter, with just his amount of niceness. Related: you couldn’t have written a better ending.

I’m also fascinated by sportscasters’ fascination with team chemistry. A team has it when it wins, and doesn’t when it loses. In non-sports parlance, chemistry between people is almost always sexual; this language brings out the latent homosocial elements in team sports. High-fives, hugs, butt-pats; the effects of good chemistry bring bodies together. In sports, chemistry describes how well players play with each other, which is both distinct and indistinct from how well players play. It also entertains the fantasy that our favorite players like each other, would be together even without the millions of dollars that make them teammates. I wonder if a team with bad chemistry can play well, or a team with good chemistry can play poorly. As a Pacers fan, I wonder this a lot.

Some descriptions of “the ballgame” make me question my sense of what a ballgame is, and what happens to it. For example, “it’s their ballgame to lose.” This phrase suggests (1) that the ballgame belongs to one of the teams, and (2) they have it so that they can lose it. Is a ballgame a series of events, disparate parts, or some kind of whole, something to catch or keep? Or is it an ever-changing probability, waiting to resolve into belonging to someone or other? Ballgame ontology is only complicated by the phrase “it’s a whole new ballgame;” what makes a ballgame new? Presumably a whole new ballgame is neither team’s to lose; its newness, like so much newness, is an erasure of what we thought we knew. Is this the ballgame at its purest—newborn, unresolved, unsustainable?

scrappy, fiery, firecracker, class act, physical specimen: These are all convenient catchphrases to signal both the race and personality of an individual player. Although (presumably) athletes have all kinds of temperaments, backstories, and attitudes, televised sports drama is a sort of commedia dell’arte in its simple, reliable character types: the troubled athlete struggling to overcome adversity, the (usually white, but sometimes just large and unathletic) bruiser who succeeds with sheer size, the quiet, humble, international developmental talent learning to adjust to a new sport, league, and country. These characterizations may be overly broad, and are sometimes unethical in their depictions of both races and individuals, but they provide us with charmingly familiar characters to enact the feats of athleticism we crave. I guess it’s worth it?

Just knows how to win: sports mystics, this is the phrase for you. With these words, winning becomes not just a result, or even an ability, but a kind of secret knowledge that only few can access. These elect players have what sportscasters call intangibles, which do not show up on a stat sheet; theirs is an ethereal aura. In fact, sports mystics sneer at statistics in general; winning is more than a sum of its statistical parts, is in fact something holy and secret. In a way this line of thinking rings true with me; we can’t provide cause, analysis, or interpretation for everything that happens in sports, and to try to often results in confusion or annoyance. There is only so much we can say about the events on a court, field, or rink; the rest we must pass over in silence.