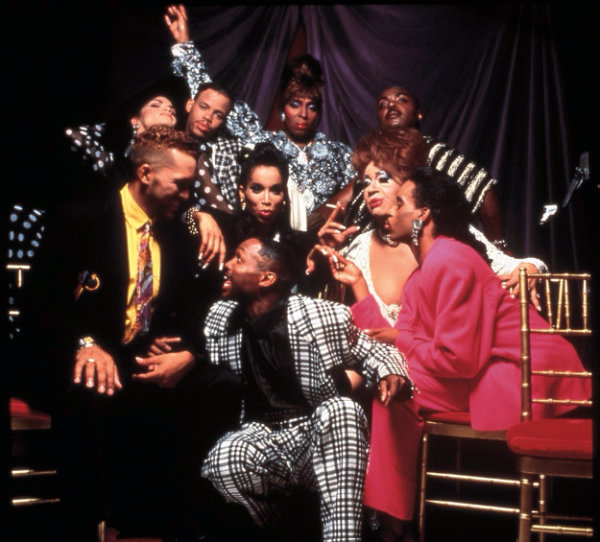 When does slang die? Is it when your mom sends you a link to a TIME.com definition of “bae”? When “shade” becomes a Jeopardy question? When “selfie” beats “twerk” for word of the year? These words have become so removed from their original contexts that they begin to lose their meaning, or at least some of their value. After all, isn’t one of the primary functions of slang to identify the speaker as a member of the community? I don’t care how many episodes of RuPaul’s Drag Race your cool mom has seen, she does not throw shade in quite the way the queens of Paris is Burning do.

A brief survey of trendy slang words reveals that they almost always come from relatively disenfranchised communities. People of color, queer people, young people, women: you make the best new words. Also usually the best music, poetry, and culture. This is because less privileged cultures are by necessity more intimate, transgressive, and creative; in other words, more cool. Peter Stallybrass and Allon White wrote a pretty smart book about all this, claiming that the language and culture of “low culture” can become “a primary eroticized constituent of [the powerful’s] fantasy life.” This describes Miley Cyrus’s “twerk-tastic” VMA performance perfectly. It also explains why “community representatives” are constantly policing what is and is not an appropriate representation of their culture.

I’m at a loss for judgment on what “should” happen in these cases of linguistic appropriation. On the one hand, I realize that language is organic and there is no use in trying to control how people speak. On the other hand, there is clearly an uncomfortable power dynamic at work when richer, whiter, and older people begin to adopt the words of the less privileged. I’m also part of most of these more privileged communities and feel like I’m in no position to judge either way. IDK. What I can do, though, is describe this process of words becoming more popular and less cool. The aversion to popularization is an attitude often ascribed to the “hipster,” which is a word that itself has a racialized origin and is now so ubiquitous as to be virtually meaningless. It’s inescapable. The hipster, like shade and twerking, like baes and bros and basic bitches, has come to represent more cultural phenomena and attitudes than it was originally supposed to.

This post is going to be a two-parter at least, possibly with more future episodes. Today I’m going to talk about two recently #trending words with long histories: “twerk” and “shade.” Next time I’ll talk about the “bae” and “basic bitch,” and maybe more. Suggest other words to me @readmichaelreid.

(Note: If I’ve made any errors in the etymology or origins of these words, I apologize. The histories of words, especially slang words, can be difficult to trace and to explain. Let me know if I’m missing something important. Or even better: give me a grant and I will lock this shit down.)

In terms of trending modern slang, “shade” is a fossil, newly rediscovered. The word originated in 1980s New York gay culture, and is most famously described in the excellent documentary Paris is Burning. Dorien Corey explains that the act is related to “reading,” or insulting another queen. Shade requires more subtlety, though; to throw shade is to insult without insulting, to dismiss without engaging. In its deft negation shade is similar to “I can’t even;” in its graceful insinuations it is more like the sprezzatura of the Renaissance court.

As a part of popular/internet culture, though, “shade” is much newer. Check out this graph of “throwing shade” as a google search term. 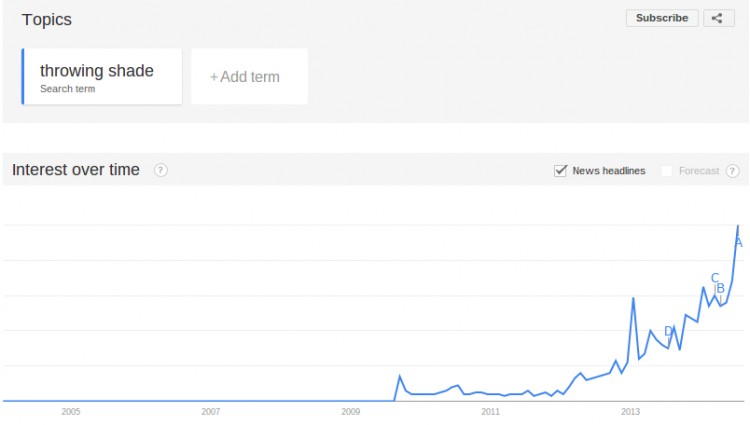 That’s quite the spike! This renewed interest may have been inspired by RuPaul’s Drag Race, which first aired in 2009; the show even features an (excellent episode) called “Shade: the Rusical.” Since its meme-ification, “shade” has moved well beyond queer or drag culture and into the realm of reality TV and White House politics.

Because of both its popularity and its ambiguity, the meaning and appropriate usage of shade has created some debate. Just what is shade? This question is essential to the phenomenon’s existence; shade exists in a gray area where it can go unacknowledged or unnoticed. Who can throw shade? This question is more interesting. As Corey mentions, shade comes from a position of less power; because both are “black queens,” they have to attack indirectly through shade. It’s also telling that the most famous straight throwers of shade—Michelle Obama, Mariah Carey, Beyonce—are all black women. This is why shade is still relevant even as it is embraced by straight culture; it describes a relation of dismissal or negativity that can subvert power in its subtlety. You can be “over it” without aggression. Shade may not have the specific cultural meaning that it did in the 1980s, but it still describes an identifiable attitude and relationship.

Actually, the word “twerk” isn’t much younger. Although a similar booty-shaking dance called the mapouka existed long before, twerking as a word and concept in American culture originated in New Orleans in the early 1990s. There’s some discussion as to who first used the word (or started the dance), but the most important early use is in DJ Jubilee’s “Do the Jubilee All.”

Around a decade later, “twerk” had infiltrated both mainstream rap culture (the Ying Yang Twins’ irresistible “Whistle While you Twurk”) and the queer subculture of sissybounce. Out of the latter scene emerged Big Freedia, New Orleans Bounce Queen and live performer extraordinaire. She’s amazing.

And then there was Miley. Before “We Can’t Stop” or the VMA’s, she posted this bizarre video. In a brilliantly perverse twist, Miley subverts all of the original sexualized content of the dance with her child’s pajamas and relatively curveless, hidden physique. She got a lot more overt in the second verse of “We Can’t Stop,” and still more so in her instantly-infamous MTV performance. She recklessly objectified herself as well as her (black) back-up dancers, and mainstream America (they still watch MTV?) was both horrified and intrigued.

Miley’s obsession and the resulting controversy is what catapulted “twerking” from just another sexual dance to a conversation piece over Thanksgiving dinners in 2013. Think pieces both good and bad were written; phrases like “minstrelsy” and “slut-shaming” were used. Big Freedia made a publicity surge explaining to everyone what “real” twerking is. In the Big Culture Moment that was twerking in 2013, many people forgot that twerking was always objectifying. Watch that Ying Yang Twins video again. Thinking about purity with twerking seems strange to me; everyone who tries to twerk understands it’s about ass-shaking. The twerk craze wasn’t the total bastardization of a storied cultural institution; it wasn’t the Harlem Shake. But now “twerking” represents to older white Americans the strange appeal that black/”hip-hop” culture holds over their children, similar to what “gangsta” came to mean in the 1990s. Back then, Charles Aaron wrote a brilliant essay about white kids and rap culture that applies here as well: it can be a form of escape, a form of rebellion. That’s a lot for one dance to take on, and by now “twerking” seems played out in discourse if not on the dance floor. It’s no wonder that Big Freedia has “moved on.”