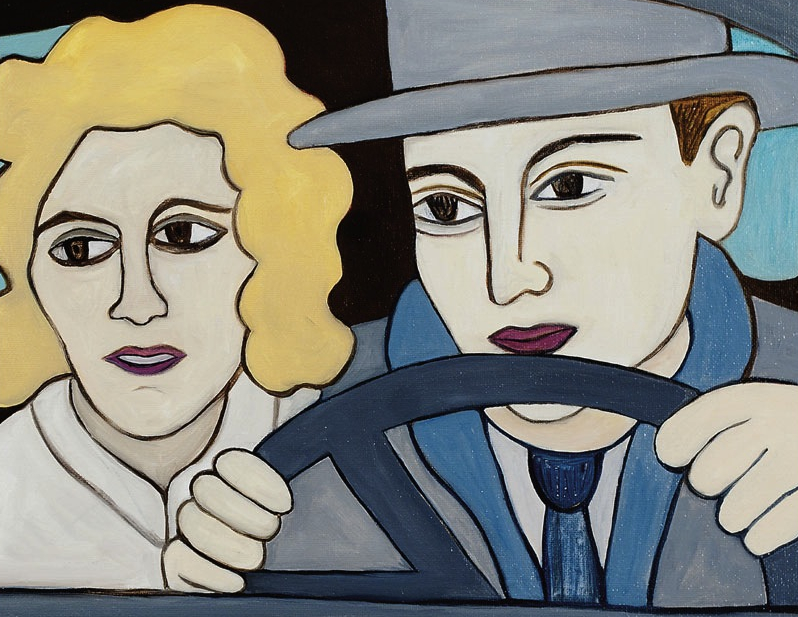 Recalculating • The University of Chicago Press • 2013

Something in the poet Charles Bernstein loves the taboo of light verse—which may be a surprising statement considering he, with Bruce Andrews and others, is credited with inaugurating supposedly the most inscrutable and ponderous of postmodern American poetics: L=A=N=G=U=A=G=E poetry. Recalculating, his latest collection of poems, a hefty 180-plus pages, is not just a volume bent upon reconsidering “poetics of the decades since the end of the Cold War as seen through the lens of social turbulence and personal tragedy,” as the jacket flap macrocosmically has it, but also I think a crucial chance to read Bernstein’s poetry, the thing itself, intimately, below the clouds of polemic, contexts aesthetic or otherwise. Such a naïvely ideal approach to this poet wouldn’t be so thorny an endeavor but that the poems themselves, and their presentation, plead us not to forgo what sits beside poetry besides other poems.

Quoting Bob Perelman, John Dowland, Louis Zukofsky and Charles Olson, Recalculating opens with four elegiac epigraphs. Perelman’s excerpted lines include “never forget to set down what must be set down / so that it not be forgotten, / not be lost in all this time: Emma.” Emma Bee Bernstein, whose lines come after the table of contents but before the title page and first poem, also prefaces the collection. For those who don’t know, Emma Bee Bernstein, the daughter of the poet, died tragically in 2008. There is no easy way to decide how this death is or is not present on every page of the collection. Nor should there be. How as readers should we recognize elegy; what are its limits; where is biographical information extraneous, where necessary to appreciate a single piece, an entire volume? It’s not that these unanswerable questions aren’t always present when opening any book, it’s just that here they are what the book literally opens to, in a sense. As readers, we have to accept a double-bind: to hear a grief that isn’t ours, and within bounds; even as to know grief is to know something not always perceptive, and in its terrible way, a thing that’s boundless. In the context of Bernstein as poet and poetic thinker, it means questioning once more the premise of the lyric: how exactly does a poet who has worked so diligently to disjoint the too-easy blurring of poet, speaker, and author now address such a thing as elegy, grief, loss, and death? In what voice, or rather, in whose voice, if “voice” remains a concept we riskily cling to?

I make an about-face and return to Bernstein and the power of light, silly, nonsense, doggerel verse. We are used to hearing these terms derogatorily regarding poetry of less than exemplary literary value; perhaps suggesting either clumsy or downright ugly rhythms: inept, sentimental, misordered, trivial, cliché. But what if a poem’s great literary value is rather because it embraces these taboo registers, willingly, wildly, playfully? A poem called “Poem Loading…” gives us centered in the page its sole body: “please wait.” Another, “Two Stones With One Bird,” tells us “trans- / ience / is / here / for- / ever.” “DEA%R FR~IEN%D” presents keyboard hijinks. “Fold” goes on and on in the vein of “I pet my pet, I fear my fear, I torment my torment, I wear my wear,” etc. “I Will Not Write Imitative Poetry” has sixteen page-center italicized lines of its title repeated. “Not On My Watch” yields “Then on whose?” “The Most Frequent Words in Girly Man” (Bernstein’s last collection from 2006) lists just that, for eleven pages.

Interlaced throughout these impractical jokes, knock-knock, spoofing poems are some of the most famous—and yes, moving—translations or re-interpretations of classic poems by Fernando Pessoa, Baudelaire, Mandelstam, Apollinaire, Catullus. As well as appearances by more obscure spirits: Velimir Khlebnikov and Régis Bonvicinco. The translations are deft, memorable and radiate a sense of fidelity to the original, revealing the rigor of Bernstein’s egolessness as craftsman. They read, in fact, as if anonymous “literary” English (not exactly what this poet has long aimed for, I bet). And beyond these accounted variations are many other types of poems—some dated and of a personal, topical nature incorporating “Dr.” Lacan, Occupy Wall Street, surrealist procedures, limericks, Jewishness; longer gamboling meta-poetic romps on manic overdrive; even shorter, lyrical hiccups (two favorites of mine: “5 for MP” and the gorgeous song sequence “Breathtails”). One consequence of Recalculating’s freely mixing translations, inspired riffs and original improvisations together must be that Bernstein’s unique “voice” as poet, including the most personal, affective tones, is most itself within a range of summoned voices, from other languages, verse forms, traditions—and finally, in the broadest sense, from memory itself. Impersonation isn’t so impersonal to Bernstein, I’d argue.

And so the stylistic biodiversity of Recalculating has set me recalculating my sense of Bernstein as poet, because he has written a baggy, catch-all book, forsaking no single mode nor privileging one attack strategy over another. Reading the book made me think long on the title, which Susan Stewart’s smart blurb glosses on the back. To go a pedantic step further: etymologically, to calculate comes from the Latin calculus, a small pebble used on an abacus for weights and measures. One can’t help thinking of the tiny rocks and stones placed atop a grave, a Jewish tradition. Though Bernstein’s gift has always been comedic, in the classical sense, interspersing homage, satire, triviality and weightiness to the brink of confusion, I think also how oddly tragic and fraught the “minor key” can be, thanks to these poems, and their effusion inside empty speech, campaign slogans, stupid puns and endless plug-and-chug list poems. Bernstein has long been obsessed with the dense yet facile nature of language use, its holey rules of address and arbitrary theoretical scrims. In Recalculating, the triumphant openness towards frivolity and lyricism—alternatively, simultaneously—reminds me of a certain pathos plangent in (of all things) postwar French theory, what many got right about texts and contexts in their riddled alien logic: how much loss and elegy, how much insignificance and forgetting there is in writing, yet not from what we bring to it—rather from what confronts us already there. How meaningful it is.