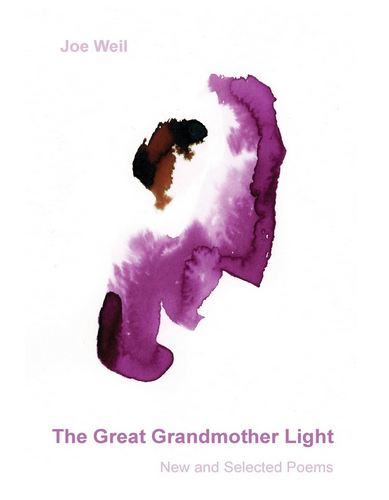 Joe Weil recently published his life. For a poet, that means releasing a sizable “new and selected.” And so we have The Great Grandmother Light from NYQ Books: surveying his previous collections, casting for what remains, for the obsessions throughout volumes written over decades, arguing the poet’s own choices (as well as the ones he’s expected to make) for what he’d see lodged in the reader’s digestive system for a good long while. Contenders for eternity, in short. Disclosure: Weil was my first serious poetry teacher; I was but a wee babe, a high school senior, in that sacred tract of land known as New Jersey. Years later, he became a professor of creative writing at Binghamton University, where he currently teaches. I hadn’t read these poems—many familiar to me, many not—in nearly ten years.

Rereading them, I keep thinking of Pound’s 1914 review of Robert Frost’s North of Boston: “Mr. Frost has dared to write, and for the most with success, in the natural speech of New England; in natural spoken speech, which is very different from the ‘natural’ speech of the newspapers, and of many professors.” And also: “Mr. Frost’s people are distinctly real. Their speech is real; he has known them. I don’t want to much meet them, but I know that they exist, and what is more, that they exist as he has portrayed them.” For a poet with the sensibility of a master short-story teller, the same daring today, it seems to me, wouldn’t be in summoning New England farmers and parsons—do they exist?—but many of the people that populate Weil’s poems. That is, the neighborhood working stiffs of northern New Jersey, its chummy losers and benign perverts, the children of the American 1970s where labor was still a mainstay even as popular culture was only beginning to whitewash this country’s regionalism (e.g. Frost’s provincial airs) into a media-ted, medicated, middle-going American suburbia. In Weil’s poems, there’s still a chance to get a whiff of a sitcom that never aired but played inside millions of lower-middle class homes and development blocks, each with its endangered dialect, its sense of cool, its semiotics of bottom-line reality.

In theory, this all sounds terribly dry. Practiced throughout The Great Grandmother Light, the effects have all the artistic vigor one could want. But there’s more, an unfailing sense of comedic timing care of Weil’s immensely Catholic, cheese-ball shtick. Take a poem called “Variations on a Theme by Isaiah”:

I ride my bike past a deserted house on Burnett Street.
A premature moon rises over the Chivas Regal sign.
A child, maybe nine, who has written on the sidewalk
“THE ROCK” in bold rainbow-colored chalk,
is busy giving me the finger.

As I pass, the kid whacks me in the back with a dirt bomb.
I turn to glare, and the white blossoms of a catalpa
drop petals all over the little bastard.
He is like a god standing there, transfigured,
his whole being lost in the flowers.
He is laughing like a god.
He, no doubt, tortures bugs.
His father is probably missing an arm
and shows up once a week with an assault rifle
to take him to piano lessons.

“Faggot,” says the kid.
“Lucifer,” says I.
“The Rock’s a wussy,” I continue.
I, too, grew up in this neighborhood,
know its cheerful hostilities,
its wiseass ways.

Not exactly Rilke. Yet “believability” Weil has in spades. It’s the storyteller’s art, the pitch-perfect portraiture that Pound saw in Frost, and linked to de Maupassant, that includes, in the American grain, more cosmic masters like Faulkner and O’Connor, but also Welty, Singer, Grace Paley and the Newark of Philip Roth. Literary regionalism in the 20th century tends to be a Southerner’s art, and I bet this testifies to just how long the Southerners resisted, happily and unhappily, the identity that “heartland” America had relegated to it by the techno-publishing powers of New York City and Hollywood. To find Weil’s poetic equivalent after the generation of Frost and W.C. Williams is difficult, since even the most autobiographical post-War poets, at least the famous ones, were not in the business of sounding regional. When poets do ritualize their turf, like Frank O’Hara, they sure aren’t too keen to broadcast the signifiers of their childhood and adolescence in Grafton, Massachusetts. (Among practitioners today, Weil most resembles Eileen Myles, modern-day folk poet, social activist, working-class child of Boston and gutsy lyricist, a poet who forsakes the preciousness of unpeopled landscapes for the messy embodiment of densely lived-in, actual places.)

Folk poetry, like folk art, resists embarrassment for being local, not sufficiently credentialized; it believes still in a community that one can walk around in, or recollect well enough as if able to still do so. Weil’s poetry, with its TV antenna capturing Channel 4, a few volumes of the 1965 Encyclopedia Britannica propping up the bad leg a dining room table, father watching the Jets game, abscessed teeth treated with a tea bag, exists in a world that no longer is. A world that, if we’re honest, not many of us would want to be caught dead in. What eliminates undue mawkishness from this memory-work, however, is that Weil is never a nostalgic poet of easy moral uplift. Rather, he’s fascinated with memory’s mechanisms and lies (many of his characters deliberately two-dimensional inventions). Indeed, nostalgia enters in, dignifies and distorts many of these poems but never at the expense of recording life’s uglier, rather untidy, flat-out putrid details. For this reason, Weil’s gift for image-making is often rooted to a larger scene or geography,  one where sentimentality grinds up against the profane and tacky; as readily as literary and pop allusiveness share bunks with the Eucharistic imperative. The poet knows better than us his shithole and its miracles.

As he writes in his most anthologized poem, Ode to Elizabeth:

We are not the salt of the earth.
I’ve got no John Steinbeck illusions.
I know the people I love have bad taste
in furniture. They are likely to buy
crushed-velvet portraits of Elvis Presley
and hang them next to the Pope.
They fill their lives with consumer goods,
leave the plastic covering on sofas
and watch Let’s Make a Deal.