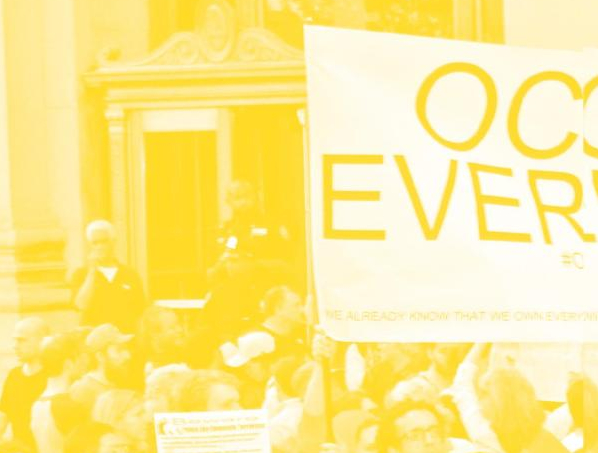 Franco “Bifo” Berardi’s newly translated book The Uprising: On Poetry and Finance is light on two things: poetry and finance. What Berardi gives the reader instead is a poetics loaded with quasi-literary keywords and bits of post-Marxist critique, a poetics that is semiotized and Search Engine Optimized for the reader of contemporary theory. If we were to give this poetics a name, we might call it reverse symbolism, for Berardi means quite literally to reverse the project of symbolist poetry, or what he calls “the main thread of twentieth century poetic research.” The symbolist culprit, the moving target of Berardi’s reversionism, is what he calls the “dereferentialization” of language, the tearing apart of the signifier and the referent. To put this in another way, The Uprising argues that symbolist experiments with language in the early twentieth century have found their deepest expression in our current predicament. We now find ourselves in the throes of a symbolist “semio-capitalism” where the word and the world are no longer linked together in meaning.

Semio-capitalism is a portable concept; it is easy to pack and travels light. In parable form, it goes something like this:

Financialization and the virtualization of human communication
are obviously intertwined: thanks to the digitization of exchanges,
finance has turned into a social virus that is spreading everywhere,
transforming things into symbols. The symbolic spiral of financialization
is sucking down and swallowing up the world of physical things, of
concrete skills and knowledge. The concrete wealth of Europeans is
vanishing into a black hole of pure financial destruction.

Now, I’ve never seen a symbol “suck down” or “swallow up” anything—including matter, skills, and knowledge—but Berardi does tie another knot between symbolist poetry and finance: deregulation. Citing Rimbaud’s phrase “dérèglement des sens et des mot,” Berardi, through sleight of hand, hitches the symbolist (or proto-symbolist) “deregulation (or derangement) of the senses and the word” to the economic project of financial deregulation that took place throughout the 1980s, 1990s, and 2000s in Europe and America. The idea is that symbolism “deregulated” language by divorcing it from the world in much the same way that financial deregulation led to a disconnect between financial instruments and the value of labor.

This is a tidy metaphor, but more on that later. The first problem with Berardi’s analogy between poetry and finance is that it bears no relation to the reality of either.

Financial deregulation was not meant to divorce money from matter or value; its purpose was to get government out of the way of finance. The result, we know from no less than two financial crises, was not the loss of connection between money and matter, it was the wild proliferation of connections, of speculative positions taken on anything and everything. Or, as a financial regulator once told me, “It isn’t the speculation on ‘nothing’ that keeps me up at night, it’s the gambling on all of the things that matter.”

So there was nothing symbolist about the development of modern finance. In Berardi’s version of symbolism, nothing means anything. In global finance, every signifier is forced to mean something. Every speculative position is tethered to some good or commodity or service, or some permutation thereof. This is why financial regulators are trying, and failing, to put limits on the number of positions speculators can take on commodities.

What’s worse, Berardi never identifies the beneficent regulator of symbolist poetry, the good guy we need to reinstate in order reverse symbolism and bring meaning back to language. Who was such a regulator in the time of the symbolist poet? Perhaps it was bourgeois morality or the real and violent government censor? Or maybe what we need is general intellect in high-minded agreement, synchronized en masse by Berardi’s poetics?

The Uprising revels in the commonplace that financial instruments are fictional, as in not real. But if these contracts are merely “fictional” or “symbolic,” how did they manage to sink the global economy? If the same logic applied to literature, we’d be living in a world of flesh and blood Hans Castorps, and we would also have very little need for novels or poetry. Speculation leads to failure. In a contract where one person bets on one thing, and another person bets on its opposite, someone will lose. No one loses this way in literature (except for the writer blurbed by Jay McInerney).

If Berardi is right about one thing, it is that financial capitalism is semiotic. It thrives on interpretive value, on the meaning we have too long attributed to money as a medium. More than that, though, finance is properly aesthetic. The French philosopher Jacques Rancière, a friend to symbolist poets like Mallarmé, has identified the “aesthetic regime of art” with the period when literary representation broke down. The “aesthetic regime” began when the mass circulation of novels and poetry reduced the classical hierarchy of roles to a scrapheap. In the aesthetic age—we’re still in it—no privileged connection between form and social position remains intact; in fact, the emergence of the aesthetic led us to a moment when everything, even idle matter, can speak. Ours is an age where a writer can find the whole history of oppression in the mute speech of the Pergamon Altar.

The dark underbelly of the aesthetic or semiotic condition is that it allows for any and every object to become a medium, to speak for something else. In the case of the financial economy, money has been fetishized—by the theorist as much as the nefarious financier—as a medium more capable of exchange than language. This mediatization of money is the fever dream of Hofmannsthal’s narrator in his great Letter of Lord Chandos, the work that perhaps more than any other announced the semiotic age of language:

And the whole thing is a kind of feverish thinking, but thinking in a
medium more immediate, more liquid, more glowing than words.

The Uprising is a concise, even powerful expression of Lord Chandos’ nightmare, of the idea that money is hyper-exchangeable whereas poetry is the “language of nonexchangeability.” In this sense we might consider Berardi’s theory the crystallization of semiotic critique, and we might call Berardi himself the diamond of theory.

Berardi’s book is meant to galvanize “the general intellect” into believing that poetry is a non-exchangeable form of language. This because Berardi (admirably) wants us to believe in another world altogether, one we are transported to by poetry as “the excess of language, a hidden resource which enables us to shift from one paradigm to another.” In Berardi’s work, as in much of contemporary theory, literature becomes a vanishing mediator, a throwaway wormhole that takes us to another community. But communities must be built before they are found. Poetry can only build a community if it is exchanged, and exchangeability lies at the very etymological root of the word literature, of letters shared among friends. Perhaps it is Berardi’s own semiotization that has led to his alienated view of poetry; it is ironic that he considers Google to be an evil algorithmic plot driven by semio-capitalism even when his name registers more than two million search results.

The mistakes of The Uprising speak to a much larger crisis within the evolution of theory in general. In fact, if contemporary finance is analogous to something in literature, it isn’t symbolist poetry but theory itself. Denationalized, decontextualized, divorced from its origins in philosophy and criticism, theory has assumed totally deregulated positions on everything from literature to politics and beyond. With its uncountable speculations and tightly commoditized, catchworded language, theory has become the swaps market of thought.

There is another disturbing undertone to The Uprising, one that has spread like a secret since the burst of the dot-com bubble at the turn of the decade. Berardi makes it clear that semio-capitalism rests on a foundation of digital exchange, and anyone who reads contemporary theory knows that the digital has become the bogeyman that lurks behind capitalism. In the case of Berardi’s book, the digital is a screen-word for two ideas in particular. First, it represents the loss of “indexicality,” or the material connection between a sign and the world. To distinguish indexicality from referentiality, we might use the example of a photograph. Once upon a time a photograph was an object that, by way of a chemical process, inscribed some real, material event onto film or some other light-sensitive chunk of matter. Now in the era of the digital image, we have lost indexicality. We are free to manipulate images ad nauseum or to invent them from scratch. The result is a loss of truth-value; where we once had to rely on the material world, we now live in an automated world, alienated from matter and the body.

This veiled accusation of automatism should be seen for what it is: a generational accusation of autism. The “precarious” youth of semio-capitalism, victimized by global finance, are incapable of delivering themselves from the unreal chains of digital culture. They are plainly divorced from the material truth of the word and the world. This generational disdain is the second idea the digital covers up in contemporary theory, though Berardi hardly hides his:

In 1977 the American anthropologist Rose Khon Goldsen, in The Show
and Tell Machine, wrote the following words: “We are breeding a new
generation of human beings who will learn more words from a
machine than from their mothers.” That generation is here. The
connective generation entering the social scene today fully suffers the
pathogenic and disempathetic effects of the automation of the word.

Yet the very distinction between indexicality and referentiality suggests what we should already know, that Berardi has no faith in the material power of language. If he did, he would need only one concept. Why else distinguish between the word and the material sign?

Maybe it is time to regulate the theorist’s position, the mantra that says we have lost the link between the word and the world. We haven’t lost anything in language. Rather we have experienced an amplification of the same conditions that first brought us “the aesthetic regime of art”: new, democratizing forms of circulation and a breakdown of social hierarchies. If this is true, we do not need literature to act as a vanishing mediator that takes us to another world before disappearing. We need words to perform another economic operation: redistribution. At its best, symbolist poetry helped redistribute what was seen and said away from dead metaphors and realist claims to representation. Now, more than ever, Mallarmé and Rimbaud can help us shake the belief in medium more immediate, more liquid, more glowing than words.