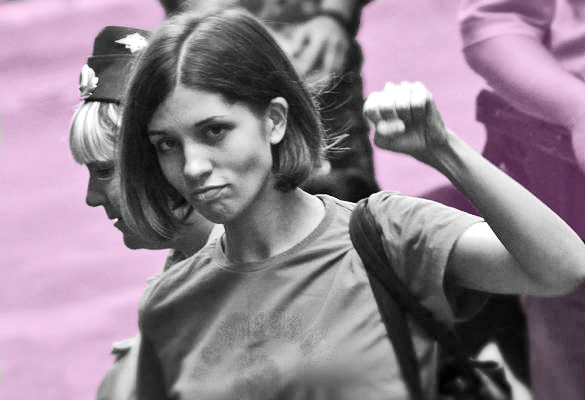 Pussy Riot. Feminists. Prisoners of Conscience. Russian riot grrrls. These are the signifiers, plucked from their Russian socio-political context, that have come to represent this women’s art collective in the Western media. Robbed of any historical or cultural continuity, Pussy Riot have been used to fuel the various narratives of the Feminist movement, the human rights community, and rebel musicians who proclaim themselves defenders of free speech. This simplification of foreign political causes is nothing new in America, but why does it happen and what is lost in the process?

Here, Diana Taylor’s description of the theory of transculturation is helpful in understanding the discourse that arose in the West concerning the Pussy Riot trial. Taylor writes: “The issue in transculturation…is not only one of meaning (what do symbols mean in different contexts). It is also one of political positioning and selection: which forms, symbols or aspects of cultural identity become highlighted or confrontational, when and why.” In the case of Pussy Riot, two central elements of their Russian cultural context seem to have been lost in translation, or simply ignored in the construction of their rebel martyrdom: a) their relationship with the Russian Orthodox Church and b) their relationship to the tradition of Soviet dissident art.

Aside from the celebrification of these women, there has been a general failure on the part of the media to closely read Pussy Riots’ closing statements as richly nuanced cultural texts. On the contrary, their words have been turned into slogans (e.g., Nadya’s “People can sense the truth. Truth has an ontological superiority over lies”), or have been deemed insincere. In a recent appraisal of the Pussy Riot cultural phenomenon, Sara Marcus accuses the women of  “a certain tailoring of a message under pressure.” While Marcus astutely differentiates the kind of feminism represented by Pussy Riot from the kind that manifests itself in America today—whereas American feminism focuses on “women’s issues,” Pussy Riot’s feminism “shows up here as a focus on the repressive ideas about sexism, sex, and family life that so often show up as ideological linchpins of authoritarian regimes”—her analysis falls short when she insists that Masha’s depiction of herself as a sincerely confused Christian believer is a mere posture for publicity.

It is wrong to assume that Pussy Riot’s acts are explicitly anti-religious. In fact, out of five performances over the course of four months, only their final one was directly aimed at the Church, by using as its stage Christ the Savior Cathedral—the place epitomizing the modern-day Russian Church’s compromise with the political regime, where Russian Orthodox Patriarch Kirill openly endorsed Putin’s presidency as “a miracle from God.” The members of Pussy Riot are protesting the authoritarian regime’s co-opted Christianity, not the religion itself. The Pussy Riot punk prayer consciously invokes the “Mother of God”—a key symbol in Eastern Orthodox Christianity—to chase away Putin, thus uniting religious, feminine iconography with political protest in a message intended to communicate, not merely to provoke.

These women are as well-versed in Feminist theory as they are in Old and New Testament teachings; their fight for individual liberty and truth in an authoritarian state is informed both by humanist values and Christian spirituality: “I think that Christianity, as I understood it while studying the Old and especially the New Testament,” Nadya said in her closing courtroom statement, “supports the search for truth and a constant overcoming of oneself, the overcoming of what you were earlier […] [I]t seems to me that the prosecution is trampling on religion.” Nadya’s elaboration on the idea of true belief places her in the tradition of such ideological giants as Tolstoy, who ardently opposed the Russian Orthodox Church while also championing a personal, non-institutionalized form of Christian spirituality.

Whether their truth-seeking project seems over-idealized, its use of Christian rhetoric and imagery is not accidental. And yet, for whatever reason—I imagine in large part due to our country’s current state of affairs—the notion of allying genuine religious belief with radical anti-establishment sentiment sits falsely with liberal Americans.

Just as Pussy Riot justify their insistence upon freedom of speech by invoking the traditional Russian Orthodox phenomenon of the Holy Fool (“We were searching for real sincerity,” says Nadya, “and we found these qualities in the yurodstvo [the holy foolishness] of punk”), they seek to legitimize their artistic endeavors by harkening back to their recognizable dissident predecessors. Masha Alyokhina alluded to Joseph Brodsky and the OBERIU poets of the 1920s, attempting to establish Pussy Riot’s intellectual genealogy. They are not merely punk rabble-rousers intent on inciting anarchy; instead, Masha seeks to draw a line connecting Pussy Riot to the dissident movement of the Soviet era and, in so doing, to call the public’s attention to the parallels between that era and Putin’s regime. “[E]ven though it hasn’t been very long, now people are acting as if there was never any Great Terror nor any attempts to resist it,” Masha states, “I believe that we are being accused by people without memory.” Surely these are not the remarks of an impetuous girl seeking media attention.

It is worth noting, however, that Pussy Riot differ from their perceived predecessors in that they are an overtly political group that “engages art forms.” Conversely, Brodsky was adamantly apolitical—but, by virtue of refusing to conform to Soviet state-sanctioned demands on art, his writing became a political act in and of itself. The OBERIU poets, meanwhile, were the last bastion of the Soviet avant-garde, pushed out with the rise of Socialist Realism, and subsequently persecuted during Stalin’s purges of the 1930s.

It is important to understand the function of such comparisons within Pussy Riot’s intellectual project. Both the Pussy Riot and Brodsky trials were farce-like demonstrations of the state’s hostility to free artistic expression. By explicitly drawing these parallels to the past, Pussy Riot show how little has changed in Russia: “Just as the dissidents were not defeated; although they disappeared into mental institutions and prisons, they pronounced their verdict upon the regime.” And now, even though Masha and Nadya have been found guilty, shipped off to labor camps east of Moscow—their own “verdict” upon Putin’s government still loudly sounds.

By pigeonholing Pussy Riot for the sake of a specific Western cause or indulging America’s cult of celebrity, our media runs the risk of blatantly ignoring the specific historical context that has given rise to this group and failing to draw attention to the deeper socio-political implications of this high-profile show trial. It is critical to understand that what these women are protesting is nothing new: freedom of expression has been and continues to be systematically undermined by the Russian state. Why and how this suppression has endured are questions that merit actual critical attention, not the fleeting, flirtatious interest our cultural outlets have now become accustomed to peddling. When we treat Pussy Riot as mere shorthand or cipher for our own cultural preoccupations, we fail to recognize the full critique these women leveled on not just the Russian state, but on state power in general.

In their statement, which appears on n+1’s website, on translating Pussy Riot’s closing speeches, Elena Glazov-Corrigan and Maria Corrigan conclude with a quote from the prominent Russian philosopher Nikolai Berdyaev and a nod to Pussy Riot’s historical salience:

“Nikolai Berdyaev, the Russian philosopher, said that the Russian state tended to kill Russian culture and Russian life; its imperial might again and again eradicated voices of conscience. These voices, however, do not disappear. Russian history makes us remember that conscience is rarely welcomed and easily digestible; rather it is embarrassing and inconvenient, but it rings out clear as a bell.”